The government simultaneously calls for a "mature debate" on tax while hyperbolically attacking Labor over its reform proposals. No wonder there's no economic reform. 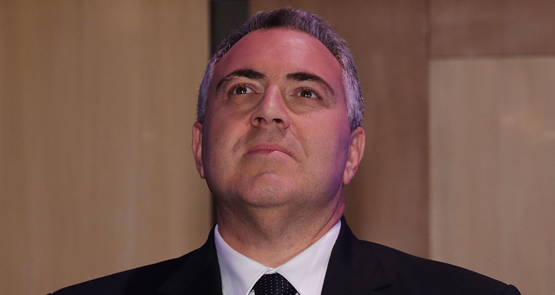 The tax reform”debate” will twitch briefly into life today, but don’t be fooled: there’s no life there, just Treasurer Joe Hockey and some jumper leads.

There’s now widespread and open dismay among both the commentariat and the business community about the government’s paralysis on economic reform. Coalition supporters like Tony Shepherd are publicly lamenting the government’s failures and News Corp and Fairfax are sponsoring a non-political national reform summit (“on a non-profit basis”, we’re assured, a basis with which both the AFR and The Australian are quite familiar) to try to encourage debate. One wonders whether the role of the media in undermining sensible debate in the interests of partisan cheerleading will be on the agenda.

But to create the illusion of movement, the Treasurer will today pretend the tax reform debate is actually happening with a lunchtime speech to a tax forum, which, in the modern political tradition, has been trailed in the media ahead of delivery.

“Surely it is not beyond the capacity of us as a country to have a sensible, mature debate about long-term tax reform more generally,” Hockey is reported to be intending to say.

Will Hockey’s speech outline some hard reform proposals that the government intends to pursue? Well, we await the parts of the speech that haven’t been provided to the media yet, but apparently not. The one significant reform proposal that government remains interested in is widening or increasing the GST, although that has been ruled out in the absence of unanimous political support. Hockey wants the states instead to make the case for GST reform. It’s one of the nervous tics of the Coalition these days, and has been since before they won the election — the insistence that others make the running on reform. The business community has been told several times in recent years it has to do the work of convincing voters on industrial relations reform. And the states are the ones who have to lead the charge on the GST. Call it the “lead from behind” model.

Hockey’s call for a “sensible, mature debate” on tax reform echoes that of Tony Abbott. In October last year, in responding to a question on fuel excise indexation (which, embarrassingly, Labor has now backflipped on), the Prime Minister urged Labor to quit carping and join the debate on economic reform. “Join Team Australia,” he urged Labor in question time. “Get on board, and have the kind of conversation, have the kind of constructive engagement, with the government that is necessary if you too are to be part of the solution and not just the originators of the problem.” On tax reform specifically, a few days earlier Abbott said he was “inviting the Labor Party, the state governments to join Team Australia and think of our country and not just the next election.”

Labor is no constructive cleanskin on such matters: during the 2013 election, its one success was a scare campaign on the GST that forced Abbott to rule out any changes. But, with critics complaining Labor was yet to produce any significant policies in opposition, it responded to Abbott’s invitation by producing two new tax proposals, on superannuation and multinational taxation, areas that Hockey admits need addressing. How did the “constructive engagement” proceed? Did a “sensible, mature debate” unfold?

The multinational tax reform proposal put forward by Labor would, Hockey said, cost jobs. “That’ll cost jobs at Unilever, that’ll cost jobs at Shell, that’ll cost Australian jobs,’’ It was a “thought bubble”, Hockey said, even though Labor had had the proposal costed by the Parliamentary Budget Office and identified the revenue that would flow from it, unlike Hockey’s own later multinational tax proposal, which came without dollars attached — just a vague commitment that it would produce “billions”. Hockey had also floated, then dumped, a “Google tax” thought bubble himself.

And in response to Labor’s superannuation tax proposal, the government immediately abandoned its own work to reform superannuation tax concessions and began attacking Labor for stealing from Australians. “They think that people’s super savings are a piggy bank for government,” Abbott told Alan Jones, “rather than something that people have put aside for themselves and ultimately for their children and grandchildren.” On the weekend, Abbott said:

Labor is also mulling changes to negative gearing to prospectively aim it at new housing stock, not existing housing stock. This prompted near-hysteria from Abbott. Initially he argued that “mucking around” with negative gearing would “put rents up”. By the weekend, mere days before Hockey is to call for a “mature debate”, that had become an almost biblical tale of carnage. “The last time a Labor government fiddled with negative gearing it destroyed the rental market in most of our major cities,” he said — a Whyalla Wipeout-level whopper that has already been discredited.

Media commentators, business leaders and NGOs who are lamenting the dearth of reform might usefully devote some time to discussing what happens when one side of politics is foolish enough to try to be a little grown up about economic reform.

‘the lead from behind model’. Why is it that it reminds me of Larry Niven’s science fiction ‘Ringworld’ series, with the ‘leader’ of a species of very cowardly extraterrestrials being known as the Hindmost.

Oh yes, because they’re called Pupetteers. Reminds me of the tactics of this government – inducing fear and panic whenever they run into difficulty in order to direct the voters back to supporting them.

“Surely it is not beyond the capacity of us as a country to have a sensible, mature debate about long-term tax reform more generally,”

Joe, it is quite beyond this country, with its present political leadership, to have a sensible mature debate.

Until Tony Abbott starts to lead, rather than remain an opposition leader in power, we will get nowhere.

All the sensible suggestions have been dismissed by Abbott in political wrecker mode.

Having now heard Leventy’s proclamations I wonder how long before attention is focussed on his criticism (FFS!) of the States for having a sparse taxation base.
There’s a reason for that, the greatest preFederation debate, the prerogative of taxation being ceded to the Commonwealth… for the common weal, a forgotten concept.
Yeh, bring on the US system of income levies at the State & City level, in addition to the Federal taxation, that’s a vote winner fer shurr.

What a mess the taxation system is in, and ecen theit computer system is buggered. Why is there so little discussion of the looming 80 billion impost on the states for health and education?
If it happens then the GST will have to rise and be applied to everything. But what about the poor rich and their private school fees?