From Pluto, NASA probe phones home — here’s what it said

NASA's New Horizons probe sails to the edge of the solar system, scanning Pluto, 4.5 light hours away from Earth.

The New Horizons space probe, which took 10 years to build and nine-and-half years to make the journey to fly past Pluto tonight, has beamed a curtain-raiser image back to NASA: a stunning wide-view picture of the “encounter side” of the dwarf planet.

This isn’t, however, one of its much-anticipated, close-up, high-definition images of the surface features of Pluto that are to follow. Many more (and far more detailed) images are now being slowly streamed to project headquarters at NASA, a process that will last as long as 16 months. 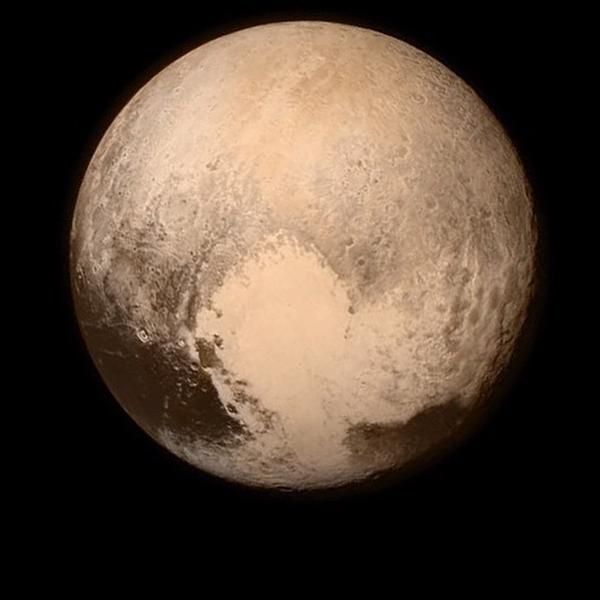 The image shown above is in fact the last overall view of Pluto taken before New Horizons came to within 12,500 kilometres of its surface at around 9.49pm eastern Australian time last night.

Detailed media briefings on the first comparatively low-resolution images and science results from the fly-past are due over the next day or so. However, NASA says the best-quality images may not even be completed until September, or later. This is because of the immense distance (more than 4.5 light hours away) that data — sent from a transmitter with less power than a refrigerator light bulb — must travel in order to reach ground stations on Earth, including the Tidbinbilla facility near Canberra, which will be first to hear confirmation that New Horizons has come through its closest encounter with Pluto in good shape.

As New Horizons raced toward Pluto, the dwarf planet’s disproportionately large moon, Charon, has swung into view as a pale, faintly blueish orb with hints of rift chasms in one area, and a smooth-looking northern polar plane. 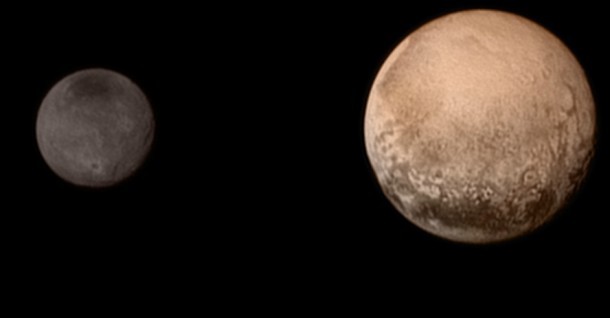 The contrast in features and colours between the two bodies is striking, as shown in the colour comparison images (above) taken by the spacecraft during its approach to the Pluto-Charon fly-through.

They are so close to each other that they are in a common 6.3-day orbit around a point close to the surface of larger, denser Pluto, locked in a gravitational grip that means each shows only the same “face” or hemisphere to each other.

Rather than fly through that gap, New Horizons made its closest (12,500 kilometres) approach to Pluto’s surface when Charon was on the other side of the reddish-coloured mini-planet. The probe came to within 27,000 kilometres of smaller Charon during its brief, high-velocity encounter with these two bodies, as well as briefly photographing the other more distant moons of the binary Pluto-Charon system.

It might not be until later today that all of the early images from the fly-through are released. New Horizons is 4.5 light hours away from Earth. By way of comparison, our planet is around eight light minutes from the sun, and little more than a light second on average from our moon.