Breaking bread. A tipster spotted Communications Minister Malcolm Turnbull having dinner with his wife and the ABC’s Leigh Sales and Annabel Crabb last night in Glebe Point Diner, not far from the Ultimo studio where Sales had interviewed Turnbull on 7.30 earlier in the night. While Sales and Turnbull discussed Q&A and where the responsibility lay for hyperbole about Islamic State earlier in the night, who knows what they talked about afterwards …? 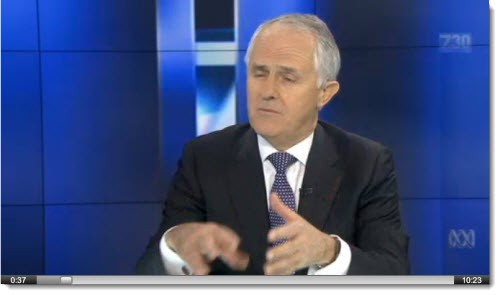 While it’s not unusual for senior journalists and politicians to talk regularly, it’s interesting timing, with the government putting pressure on the ABC to move Q&A to the news and current affairs department. Sales told Crikey: “As the anchor of 7.30, I regularly network with a wide range of politicians, business people and other contacts, as any good journalist would.” The dinner took place while Turnbull should have been preparing for Q&A, but until Prime Minister Tony Abbott lifts the ban on government ministers appearing on the show, it looks like all Coalition frontbenchers can have relaxing Monday night dinners.

All the president’s men. While most of the ALP is firmly focused on next weekend’s national conference, we hear that the Victorian branch of Young Labor is busily navel gazing, with its conference being held in early August. The Unity faction has put Will Bennett forward as their candidate for Victorian Young Labor presidency, and so far there don’t seem to be any serious challengers. We hear from a tipster that the shop assistants’ union faction is feeling frozen out of the deal made between the National Union of Workers, Short-Con and Socialist Left groups, and are looking around for someone to run against Bennett. One name suggested to Tips is Josh Gilligan, who has been connected to the NUW faction previously. While one tipster seemed keen on the idea of a Gilligan presidency, another Labor source seemed surprised that Gilligan could find support, as he’s been stepping on a lot of toes in the party already. Looks like the yoof wing of the ALP doesn’t even need the national conference for power plays and factional infighting.

Grim reading. Some readers of Wagga Wagga’s Fairfax-owned The Daily Advertiser got quite a shock yesterday, when the regular “Wheeler’s Wisdom” column (written by Keith Wheeler) urged the a re-run of the infamous Grim Reaper AIDS commercials to “remind Australians that gay marriage would be encouraging homosexuality”, and that “AIDS and HIV are at a 20-year high”. (This is not true; AIDS rates are a fraction of what they were 20 years ago.) “Perhaps the ‘grim reaper’ advertisements need a revival as a reminder of the consequences of homosexual sex”. Wheeler also urges readers to write to local MP Michael McCormack (of the Nationals) to “assure him that his opposition to homosexual marriage is supported”.

One outraged reader told Crikey these sorts of “vicious, false smears” stigmatise already vulnerable people in rural communities. “Suicide rates for young gay people in rural areas are already high — and Wheeler is telling them and their communities they spread disease and are dangerous to children. It’s not just backwards and hateful, it causes real damage to the lives of real people,” the reader said, wondering why no one at the Advertiser had stepped in to stop the column going to print. Click for a larger version … 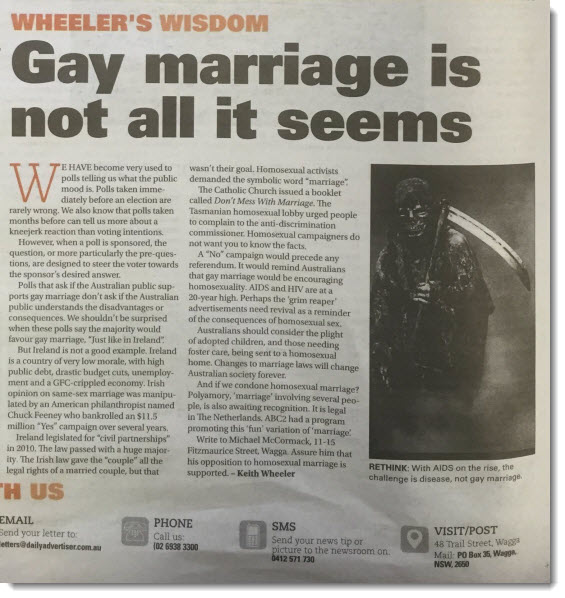 Cryptographers’ secret fight. The International Association for Cryptologic Research has written an open letter to the Australian government, outlining problems with the Defence Trade Controls Act. The letter, signed by Australian and international cryptographers, says the IACR is “deeply concerned” about the act:

“As an international organization of cryptographic researchers and educators, we are concerned that the DTCA criminalizes the very essence of our association: to advance the theory and practice of cryptography in the service of public welfare.

“The current legislation cuts off Australia from the international cryptographic research community and jeopardizes the supply of qualified workforce in Australia’s growing cybersecurity sector.

We call on Australia to amend their export control laws to include clear exemptions for scientific research and for education.”

Abbott’s answers raise more questions. A Crikey reader recently took the time to write to Prime Minister Tony Abbott about an issue she found important. The was addressed to her surname (no Miss/Ms/Mrs), and read as follows:

“Thank you for letting me know your views.
I appreciate you taking the time to write to me.
Our democracy rests on the conviction that every individual counts and everyone can have a say on the issues that matter most.
Be assured that the Government is purposefully , methodically and effectively delivering our plan for a strong, prosperous  economy and a safe,secure Australia.”.

It’s such a vague letter you could be forgiven for wondering what on earth the tipster wrote about. National security? The economy? No, our tipster says this is a reply to a letter complaining about the government’s treatment of Gillian Triggs and the government’s record on supporting human rights. One line fits all? Maybe not?

Groundhog Day. A tipster seems to have found a glitch in AirBnB’s booking system, with the house-sharing site showing the date October 3 twice in its booking system yesterday, putting all dates after it a day behind. This could lead to issues for places that are double booked or booked on the wrong days. We contacted AirBnB to find out how long the glitch had been around for and who had been affected, but didn’t hear back by deadline. 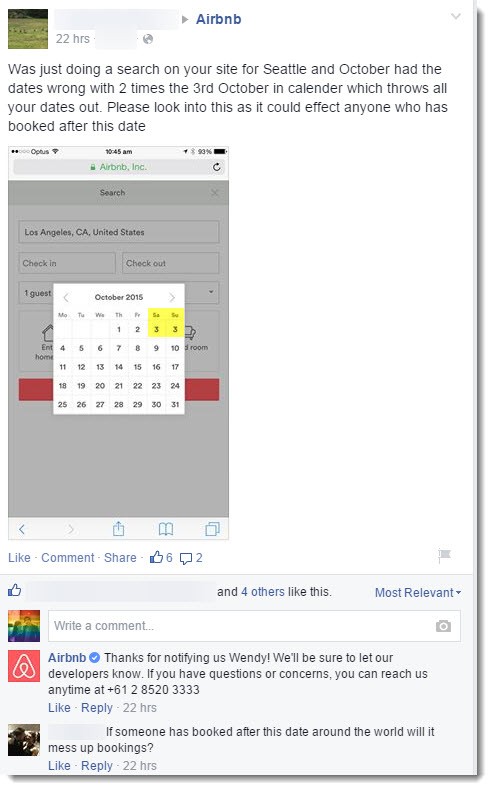 Saw this glitch on AirBnB a few weeks back, for the same weekend.

I refer to Tips & Rumours “grim reading” of 14 July 2015: I was saddened to read the article in Wagga’s daily. I suggest that the whole basis for the debate is flawed. It should not be about providing the right for same sex couples to marry but rather same sex couples doing the wild thing should be deemed to be married. There should be no need for a marriage ceremony. George Brandis should have enough meta data to know what everyone is up to between the sheets. With a legislative tweak George could identify all those same sex couples and deem them to be married. I hope that ‘deeming’ becomes an option in the current debate as it is going nowhere fast.

Worked out a while back that Sales and Crabb were LNP fellow travellers.
Haven’t watched either of these twits since then, as their bias is obvious, irritating and disturbing.
What was that about the ABC and ‘left-wing’ bias again? The people in the news and current affairs department at the ABC seem to be falling over each other to disprove that theory every single day!

Sales/7:30 quite happy tonight to echo the Teletrash headlines today – telling us that Labor lost control of the issue under Gillard (who controlled and controls most of our press and the what the media galahs have to parrot) – sans critique?