Just how obsessed is the Oz with Zaky Mallah and the ABC, mathematically speaking? And other media tidbits of the day.

How long till Q&A-gate dies down? Yesterday’s episode of Q&A brought us former Liberal leader John Hewson replacing Communications Minister Malcolm Turnbull, and another round of Q&A-controversy-themed pieces in the mainstream press.

Of course, in the four weeks since the Zaky Mallah kerfuffle started, The Australian has been leading the charge. Data whiz Rupert Hanson tried to figure out how long until the Oz stops running Q&A-themed pieces, based on the trend up to yesterday. The answer: in about eight weeks. 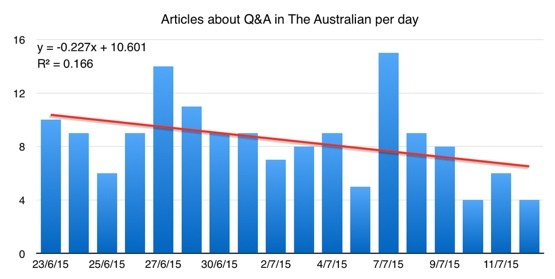 It’s worth pointing out an R-squared of 0.166 is nearly useless as a means of prediction — a perfect positive correlation between time and the decrease of Q&A thinkpieces would be signified by an R-squared of 1, and statisticians generally dismiss as weak any correlation with an R-squared of less than 0.5. Crikey pointed this out to Hanson, who responded that the Oz‘s hate for the ABC “defies simple statistical models”. Well, we can’t argue with that … — Myriam Robin

Varoufakis turns to Adams. In a wide-ranging interview — which the world’s major financial news outlets would have loved to have — the recently departed Greek finance minister, Yanis Varoufakis last night told Radio National’s Phillip Adams that the bailout deal just agreed to by Greek Prime Minister Alexis Tsipras was “a new Versailles Treaty”, referencing the post-World War I peace agreement argued to have set Europe up for World War II.

It was the rockstar finance minister’s first post-resignation interview, and we in the Crikey bunker wondered how Radio National got the scoop.

Turns out Varoufakis has been on the show plenty of times before. He has a deep regard for Phillip Adams and podcasts his show, Late Night Live, and has previously contributed an essay to the now-defunct Radio National magazine White Paper on austerity. Given the ongoing relationship, it’s no surprise he’d turn to Adams. Still, a great get for Radio National. The full half-hour discussion can be heard here. — Myriam Robin

Right hand, you should meet left hand. As usual, The Australian and The Australian Financial Review sort of missed the point from the latest Greek bailout proposals. Both papers take as an accepted fact that the deal has been done. Far from it. In fact, contrary to the headline in the AFR (“Greece accepts austerity”), Greece has done nothing of the sort — the Prime Minister has, but he  is not the Greek Parliament, nor the rest of the country (despite what he might think).

Or, as the Financial Times wrote in an email this morning to subscribers:

“It ain’t over ’til it’s over. Greece and its eurozone creditors may have finally reached a deal after a weekend of brutal negotiations in which the Greek premier yielded to the most intrusive economic supervision programme ever mounted in the EU. But what did they actually agree to? More talks. To get hold of a new three-year EUR86bn bailout, Greece must now complete a series of tasks — including quickly passing reforms it has spent six months resisting — after a process that has tested the very cohesion of the entire eurozone project.”

See? Far more informed, and again, contrary to what the AFR reported in its page 1 lede (“Athens and its creditors have ended, for the time being, a crisis”), nothing has ended, the crisis remains in place and the focus has shifted to the Greek Parliament, and then on Friday to the German Parliament, which will debate and vote on its participation in the bailout.

You can blame an early deadline for the lack of understanding of the situation with Greece … or just poor journalism. — Glenn Dyer

Look elsewhere for con advice. The Daily Telegraph has been found in breach of the Press Council’s standards, after it gave the impression the National Welfare Rights Network (NWRN) aided “dole bludgers” into conning doctors into giving out disability support pensions.

The complaint lodged by the NWRN focused on two articles first appearing on September 30 last year, that quoted online forums where people posted information on how to fool doctors.

The NWRN complained that it was listed as one of four groups who “run” the forums from which the quotes were drawn, but the body says it hosts no such forum and none of the quotes used were from its website. The welfare organisation also complained that the Tele said form letters could be used to trick doctors — the NWRN was the only organisation named who provides such form letters, but says they are neutrally worded documents intended to help welfare claimants and doctors quickly assess claims.

The Tele argued that its articles did not imply the NWRN itself was part of the “con”, and said it offered to publish a letter in response to the issue in good faith (the NWRN rejected this, saying the letter would be buried towards the back of the paper).

The Press Council sided with the NWRN in its adjudication, saying the article “inaccurately and unfairly implied the NWRN ran a forum, that the quotes in the article came from its website, and that the form letter it produced was part of an attempt to ‘con’ doctors, an allegation that was reinforced by the use of the word ‘slip’.” The Press Council sided with the Tele on the issue of the letter, saying the offer to print the letter in full in the letter’s page was sufficient to meet the council’s standards. — Myriam Robin

Sydney-centric media. Seems they don’t watch much AFL at Sky … 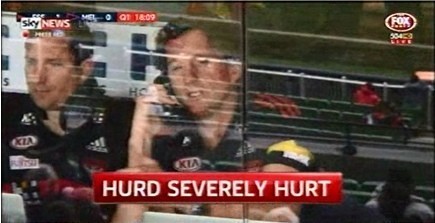