A decade on, a key US medical body has admitted it colluded with the Bush administration in justifying torture. 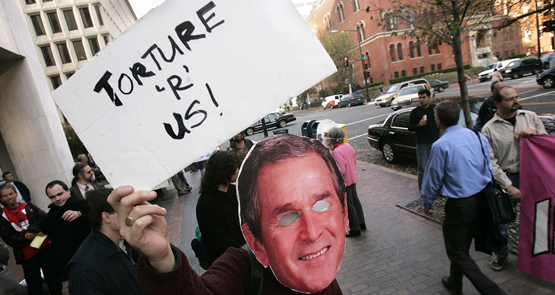 Late last week, the American Psychological Association issued a remarkable statement, accompanied by a 500-plus page report, about its role in the George W. Bush administration’s torture programs. It was an apology, accompanied by a long list of actions it would be taking to ensure that what it did during the Bush years would never happen again.

The mea culpa is the result of the book Pay Any Price: Greed, Power, and Endless War by New York Times journalist James Risen — one of the many targets of the Obama administration’s war on whistleblowers — which was released last October. Risen’s examination of the War on Terror included the revelation that the American Psychological Association had colluded with the Bush administration to amend its ethics policies to allow psychologists to participate in the CIA and military torture programs.

The Senate Intelligence Committee’s massive report on the CIA torture program — which produced no worthwhile intelligence, was the subject of multiple cover-ups by the agency and led to at least one innocent person being tortured to death — was released late last year after an epic battle in which the agency spied on the Senate committee and denied doing so before being exposed and having to apologise.

At the time of Risen’s claims — strongly backed by email evidence — the APA rejected them. A month later, it commissioned an investigation by a Chicago law firm to check the claims. Now, the report, by David H. Hoffman, is in, and it’s damning. “The Hoffman report contains deeply disturbing findings that reveal previously unknown and troubling instances of collusion,” the APA admitted. “The intent of the individuals who participated in the collusion was to ‘curry favor’ with the Defense Department, and that may have enabled the government’s use of abusive interrogation techniques.”

The chair of the APA’s review committee said:

“Our internal checks and balances failed to detect the collusion, or properly acknowledge a significant conflict of interest, nor did they provide meaningful field guidance for psychologists. The organization’s intent was not to enable abusive interrogation techniques or contribute to violations of human rights, but that may have been the result.”

The APA profoundly regrets the behaviour, and has apologised for it.

The particular focus of the Hoffman report was the APA’s 2005 guidelines, put together by an internal taskforce, which allowed APA members to participate in torture carried out by agencies like the Department of Defense and the CIA. Hoffman reported:

“We concluded that APA’s principal motive in doing so was to align APA and curry favor with DoD. There were two other important motives: to create a good public-relations response, and to keep the growth of psychology unrestrained in this area.”

“We also found that in the three years following the adoption of the 2005 PENS Task Force report as APA policy, APA officials engaged in a pattern of secret collaboration with DoD officials to defeat efforts by the APA Council of Representatives to introduce and pass resolutions that would have definitively prohibited psychologists from participating in interrogations at Guantanamo Bay and other U.S. detention centers abroad.”

Hoffman goes into extensive detail about why the APA wanted to “curry favour” with the Pentagon:

“[B]ecause of the very substantial benefits that DoD had conferred and continued to confer on psychology as a profession, and because APA wanted a favorable result from the critical policy DoD was in the midst of developing that would determine whether and how deeply psychologists could remain involved in intelligence activities. APA’s motive to curry favor with DoD was enhanced by personal relationships between APA staff and DoD personnel, an important conflict of interest that was intentionally ignored.”

The involvement of one of the United States’ most senior medical professional associations was crucial to legitimising torture within the Bush administration, enabling defenders to argue that “enhanced interrogation” was fine if a body like the APA had signed off on its members participating. Two former military psychologists, James Mitchell and Bruce Jessen, were in effect the architects of the CIA torture program and received more than $80 million for their role.

Chilling – almost as if H.Ron had a point “the very substantial benefits that DoD had conferred and continued to confer on psychology as a profession,… and how deeply psychologists could remain involved in intelligence activities. “

The APA rejected claims before checking them? Sounds like our Limited News Party government?

.. as well as his better known brother, L. Ron.

Psychologists are not medicos. Some work in health, but lots don’t. Are you confusing them with psychiatrists again? Where is their apology?