Political newcomer Jacqui Lambie has never been backwards in coming forwards, promoting the interests of the working class and veterans but ruffling multicultural feathers. But what makes her tick? Crikey intern Aron Lewin takes a close look. 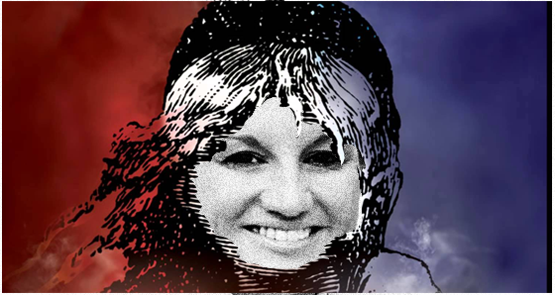 In early July, chief executives, shareholders of the mining industry and all folk in-between filled up the Memorial Hall in Queenstown, Tasmania, for a swanky, three-course dinner — sponsored by MMG mining and the Tasmanian Liberals — where the guests liaised in their business-casual outfit and dined on the best game, seafood and produce that Tasmania had to offer.

The chance to relax is a brief respite for the attendees of the Tasmanian Minerals and Energy Council conference, who anticipate a day full of keynote speeches from MPs and senior directors regarding the future of Tasmanian mining. The drawcard on the itinerary was the fair dinkum crossbencher Jacqui Lambie, due to speak between 10.30am and 11am. A populist by training, she opened her monologue by poking fun at the two omnipresent evils in the room:

“What’s the difference between the Greens and ISIS? The answer is: not very much! They both want to take us back into the dark ages.”

With that joke, the honeymoon of relative decorum was over, and Lambie was back in the media spotlight. Erratic, dissident and rowdy Jacqui is back!

She polarises. Many see her as a breath of fresh air from the mechanical stiffness and devotion to the political script that other MPs bring to the table. She brazenly declares what she thinks and champions large sections of the working class.

Her title as “underdog of the Senate” comes in part from the idiosyncratic journey she took to get there. The child of a factory worker and a truck driver, she spent 10 years in the Australian Army before suffering a severe back injury that resulted in her discharge and the termination (and eventual reinstatement) of her military compensation. A combination of the back pain and a forced dependence on disability pension, Lambie sustained a drug and alcohol addiction that led to chronic depression. Part of the recovery process was a brief work placement in the office of Labor senator Nick Sherry, but the back pain meant that she could not maintain the job. She attempted suicide a year later and spent time in a psychiatric ward.

Finding effective pain medication that helped to end her addictions, Lambie joined the Liberals in 2011 to “infiltrate the boys’ club” and gain some insight into the labyrinth of politics, but she left to become an independent and focus more of her energy on veteran affairs. However, without the funds to support the campaign, she struck a deal with Clive Palmer and joined the incongruous group of candidates in the Palmer United Party. She claimed the final Tasmanian seat in the Senate with 6.6% of the vote, and her conviction to the issues that she cares passionately about — Tasmania, national security and veteran affairs — has brought her respect from the public.

But a number of missteps and gaffes, combined with her controversial views on multicultural issues, have alienated voters. In April 2014, Lambie called for the reintroduction of compulsory military service — sure to win the votes of the 18-25ers. In July last year, she outlined the criteria for her perfect man on the radio — well hung with heaps of cash. In August, Lambie issued a warning that Communist China was going to invade Australia. In September, she struggled to explain the key tenets of sharia law and how it was connected to terrorism, a cardinal principle of her soon-to-be established Jacqui Lambie Network. A busy month, she also misappropriated an image of Lt Col Malalai Kakar on her Facebook page — the first female police officer in Afghanistan — as a symbol to ban the burqa for security reasons. In December, she interrupted a condolence motion in the Senate for Phillip Hughes in order to precipitate debate over ADF pay. The list goes on.

A neophyte in the Senate, she is under constant pressure to establish positions on a motley collection of bills, and her departure from the Palmer United Party (more on that later) has left her without a party line. Three positions have been put forward regarding who is guiding Lambie now that she is flying solo.

“In the end, Lambie should not be underestimated.”

The first is that “she is her own woman” and is not subject to external influence. An indication of Lambie’s political nuance and steadfastness to her key principles can be seen through her campaign to block all legislation until the Australian Defence Force personnel received a pay increase greater than the inflation rate. A 2% increase over three years, costing the government about $200 million, was a win for Lambie. Despite reports that she was unconvinced by the announcement, her weekly tirades on the topic have ceased and the issue of ADF wages has fallen by the wayside in the Australian media. It is possible that her campaigning on the issue has since become more discrete and she has moved onto lobbying over other issues — a sign of political maturity.

The second is that Lambie is being mentored by Senator Nick Xenophon. The close relationship between the two senators could be seen at the National Press Club a few weeks ago, where Lambie said that she would only deal with senators she trusted. She followed this statement with the assertion that “there is very little trust [in Parliament] … except with you, Nick.” The two joined in a voting bloc with senators Ricky Muir, Sam Dastyari, John Madigan and Peter Whish-Wilson — dubbed by Xenophon as the Coalition of Common Sense — to block financial advice reforms in the Senate late last year. Xenophon and Lambie have since unified to rail against cuts to family tax benefits and the manufacturing of Australian submarines by foreign countries. They have also united to advocate for the establishment of the Select Committee on Wind Turbines. If Lambie has latched onto more moderate and experienced Xenophon for guidance — as has been reported — it will no doubt be a worthwhile enterprise in developing her skills as a senator.

Finally, there is Lambie’s chief of staff and media adviser, Rob Messenger. A former electrician for the RAAF and a producer and journalist for the ABC, Messenger was elected as member for Burnett in the Queensland Legislative Assembly in 2004. In 2010, he quit the LNP due to his discontent over its leadership and — among other things — dissatisfaction over the treatment of local health in Burnett/Bundaberg and the sale of state assets. He lost his seat as an independent in 2012, winning just 23% of the vote, before being invited by Clive Palmer to join PUP and running for the seat of Hinkler. However, this led to another heavy loss, where he won just 17.7% of the vote.

Messenger was the whistleblower who brought attention to Bundaberg surgeon Jayant Patel, who was convicted of multiple counts of manslaughter in 2010 (later overturned by the High Court). Messenger declared former Queensland premier Peter Beattie “one of the most disgusting and contemptuous people to have ever drawn breath in Queensland” and was censured by the Queensland government for comparing Beattie to a prostitute in 2007 over discussions regarding whistleblower protection laws.

Messenger was central to the spat between Clive and Lambie that led to the whittling away of PUP’s power in the Senate. On November 13, Messenger was sacked from PUP for making “false and misleading statements” on behalf of the party.

Lambie was reportedly given an ultimatum by Palmer: denounce the right-wing Messenger as her chief of staff or leave the party. Ten days later, Lambie became an independent and is now facing a $2 million lawsuit from the Palmer United Party. Now that Lambie is free from the comparatively moderate Palmer, she is less fettered by the influence of Messenger. A look at his blogs on Just Grounds Community and his website — which peculiarly identifies Messenger as consultant/whistleblower advocate and “risk management” consultant rather than Lambie’s chief of staff and still promotes the United Australia Party, the abandoned first incarnation of PUP — shows that Messenger’s and Lambie’s views on a range of populist issues are similar.

Lambie recently complained that by giving billions in foreign aid, the Australian government was implicitly ignoring the needs of Tasmanians. A few years prior, Messenger wrote that sending “illegal arrivals … straight back to their home, or the country they departed from” would  allow the government to restore $738 million cuts to child-welfare payments that occurred in 2013.

Messenger wrote on his blog that the media did not report his speech for the Queensland government to ban sharia law because “they [are] scared of insulting the supporters of Islamic Sharia law … They are fear full [sic] of being labeled [sic] racist by the P.C. brigade.” He also told New Matilda that an adherence to sharia law was “A breach of section 44 of our constitution and possibly treasonous.”

However, the most shocking correspondence by Messenger — which makes Lambie’s claim in the Senate that wind farm and renewable-energy target advocates should be locked up because they are “condemning our children to a life of abject poverty” look mild — was in 2010, when the then-MP bizarrely conflated the intentions of Osama bin Laden and Kevin Rudd over their views on climate change:

“Bin Laden is reported over the weekend as saying that, ‘Talk about climate change is not an ideology luxury but a reality.’ Rudd is reported recently to have said that, ‘Climate Change is the greatest moral challenge of our time.’

“It seems as though they are at one, and getting advise [sic] from the same speech writers, spin doctors, and political allies.

“And if their plans and wills are carried out, both will achieve the same goal: The destruction of free, western, liberal societies, as we know it.”

Which brings us back to Lambie’s joke at the Minerals and Energy Council conference, which is straight out of Messenger’s playbook. It is clear that Lambie is growing in stature as a politician, developing views on a wide range of policies. In addition, with the development of the Jacqui Lambie Network, she will have more resources to pursue these policies.

In the end, Lambie should not be underestimated. According to recent reports, the Jaquie Lambie Network — or the idea of it — is polling well, with support in Tasmania as high as 20%, according to leaked internal Liberal polling, and the concept of the party is also polling well in Queensland and Western Australia. The results are being talked up by Liberal heavy Michael Kroger, no doubt out of a generous and disinterested spirit of analysis.

Tony as the Mad Monk, Jacqui as the Mad Malingerer. Or perhaps just our version of Sarah Palin.

Se is a symbol of everything that is wrong in Australian politics today. Morons to the left of us and especially to the right of us.

Despite a lot of her political (& personal) views she is quite likable. Someone you could have a drink with as opposed to Shorten/Abbott. I suspect that’s the main reason her local support is quite good. She may be compared to Hansen in political naivety & some beliefs but she’s definitely not as dumb.

I’d be happy to limit election to Parliament to those with a significant, perhaps 25%, of their working life at less than the median wage.

Recently in Tassie I found all political spectrums felt she wasn’t particularly bright but she had the colour which ensured the media treated her kindly.