Bill Shorten's standing with voters has crashed in the wake of his appearance at the trade union royal commission. And as Tony Abbott can tell him, it's a long road back. 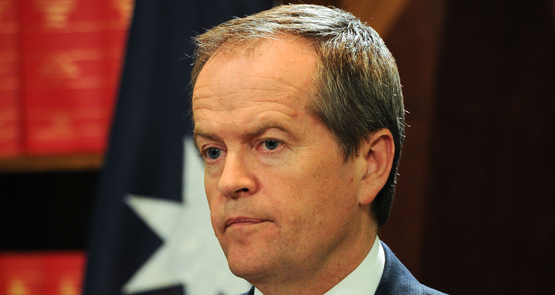 Opposition Leader Bill Shorten has recorded the worst polling of his time as leader in the wake of his appearance at the trade union royal commission and his admission of a years-late political donation, today’s Essential Report finds.

Just 27% of voters approve of his performance, with 52% disapproving. Shorten’s 25-point net disapproval figure, up from 13 points in June, is easily his worst ever. Tony Abbott has only recorded a worse figure once — 33 points, in February, and scored 25 points in March and April.

Last week, Shorten spent two days being questioned at the trade union royal commission about his time as secretary of the Australian Workers’ Union at the national and Victorian level, and he admitted that a $40,000 in-kind donation to his 2007 election campaign had only been reported days before.

Tony Abbott (37%) has slightly extended his lead over Shorten (30%) as preferred prime minister, up from five points in June. However, the Prime Minister hasn’t been able to use Shorten’s problems to improve his own standing with voters. His own net disapproval rating has deteriorated from 11 points in June to 16 points, with 37% of voters (-2) approving of his performance and 53% (+3) disapproving.

Between them, Tony Abbott and Bill Shorten have a total approval score of -41 — the biggest since Abbott was elected (the next biggest was in February, based on Abbott’s colossal -33-point score) and only slightly better than mid-2012, when voter loathing of both Julia Gillard and Tony Abbott  had both leaders with net disapprovals in the 20s. And while Abbott has recovered from the diabolical ratings of early in the year, his experience offers little hope to Shorten. Look at where the Prime Minister has managed to get to, after jettisoning the government’s reform agenda and abandoning a serious attempt to address the deficit — he touched -11 in June, but has now blown out again. Based on Abbott’s experience, it will be early next year before Shorten has clawed his way back to mere mild voter hostility. 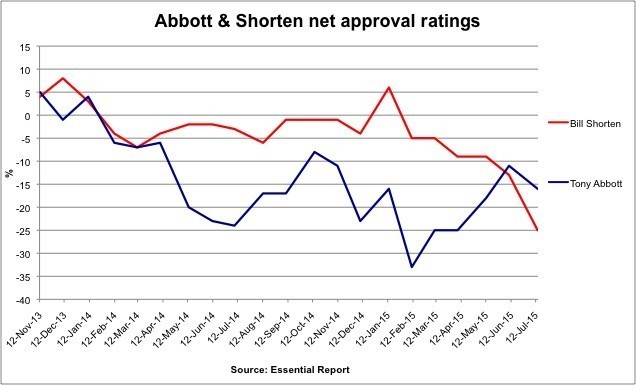 As the voting intention figures indicate, this need not be an impediment to electoral success for Shorten; indeed, Tony Abbott’s entire period as Liberal leader has been a demonstration that voter antipathy isn’t an impediment to electoral success if your opponents are bad enough. But given how poor Abbott’s performance as prime minister has been, Labor’s four-, and occasionally six-, point lead is not much of a return. Particularly problematic is how Shorten has been unable to convert the opportunity presented by voters not knowing him. As they’ve become more familiar with Shorten and what he offers, his disapproval numbers have steadily risen.

It’s impossible to avoid the sense that if Labor had a competent, experienced leader who could communicate effectively, Tony Abbott and the Coalition would be staring into the political abyss. Instead, Labor’s leadership woes, having delivered Abbott the prime ministership, may well mean he keeps it into a second term.

All you see from Bill Shorten, when he isn’t being put on the rack by Tony Abbott, is short little media grabs of him daily saying something a 10 year old (like the kid on last night’s Q&A)would say in response to Abbott and the government’s latest snafu.

Where is the whip-smart Opposition Leader that we all crave?

Like today, for example. As a result of Abbott’s cack-handed, “More Jakarta, less Geneva” ‘diplomacy with the Indonesian government, whereupon he has landed the Live Cattle Industry in more cow poo than Labor ever did, what do we get from Shorten by way of commentary?

“I’m very concerned at these developments today.” That’s not a guy champing at the bit to get into the Lodge by tearing down the Prime Minister of the day, it’s some mealy-mouthed C-grade politician afraid of his own political shadow! Tony Abbott and the Coalition will eat him for breakfast in the upcoming election. Which is exactly what the country needs least-another term entrenching the petty dictatorial inclinations of Tony the Two-Bit Tyrant.

Shorten needs to smarten up his act. And fast. He needs to take a leaf out of John Howard’s playbook and start scheduling some Headland Speeches to introduce himself and his ideas to the electorate. Then maybe he needs a heart starter every morning to give him some ticker because the best performance I have seen from Shorten was the one he gave to Young Labor last week at the Covent Garden Hotel when he was half cut.

it beggars belief that abbott is beating shorten as preferred PM.. it is not dissimilar to losing a popularity contest with Ivan Milat

Why is he still here? Is it Labor policy, having put Abbott in to start with, to keep him there forever?

Albo and Tanya. Show some solidarity, leadership, and opposition with a plan. Shorten started off as an unknown, and has gone rapidly downhill since then. And Labor – get over your bullshit aggression towards the Greens, and work on a collaborative plan that achieves both of your objectives. If you can do this you will flog the Libs. Ignore the crap coming from the increasingly irrelevant Australian newspaper and Jonesy et al. A partnership with the Greens in a mature manner is sensible politics. Look to the Inner West of Sydney as a guide. Young, smart tech savvy and informed voters have deserted Labor and gone to the Greens. Patch up this relationship and you are good for three terms.