Loopholes more like gaping holes. Here’s yet another example of how our Commonwealth political donation disclosure laws are rubbish. Controversial mining company Whitehaven Coal gave a total of $20,000 in two lots to the federal Liberal Party after the 2013 federal election. The company then reported the donations to the AEC. Did the Liberal Party report the donations from the company now chaired by former Nationals leader Mark Vaile? No. The donation is missing from the party’s 2013-14 donations declaration — and justifiably, because under Commonwealth laws, a party doesn’t have to report any donation under the disclosure threshold (now $13,000), even if the total of donations from the same donor to the same party exceeds the threshold in a single financial year. Only the donor needs to report them. So you can give a branch of a political party as much money as you like, and as long as each donation is below the threshold, the party doesn’t have to mention it. Of course, you might point out that as long as the donor has to reveal it, it’s OK. Except for all the foreign donors who don’t bother filing a return to the AEC because, well, what are they going to do about it?

More selfies than a teenager’s Instagram. How many photos of a politician can you fit in one newsletter? We think Michael Sukkar, the federal Liberal MP in the marginal Victorian seat of Deakin, may have set a record with his latest effort. A tipster sent us a link to Sukkar’s six-page winter newsletter, which features a total of 49 photos of the MP with various constituents in Melbourne’s eastern suburbs. While Sukkar’s face is unavoidable, one mug that is missing is that of Prime Minister Tony Abbott — and his name doesn’t get a mention once. Our tipster also pointed out the lack of mention of the Liberal Party, thinking that it could mean that Sukkar was avoiding the reference to his party, but MPs and senators aren’t allowed to reference their parties in communications paid for under their parliamentary entitlements. No conspiracy there, but these photos just scream “most marginal seat in Victoria”: 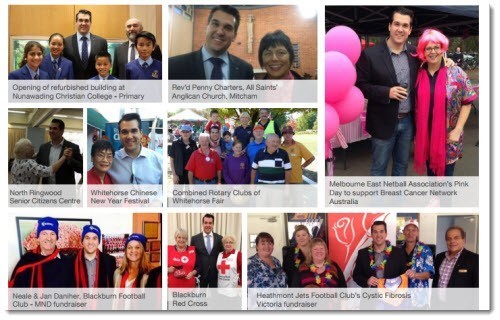 If you receive a newsletter that beats Sukkar’s 49 photos, let us know.

Advice we don’t need. America’s 1st Freedom, a publication of the National Rife Association of America — staunch defenders of the second amendment and believers in guns above all else — has published a letter warning against America following Australia’s example on gun laws. Titled “Australia: there will be blood”, it claims that the 1996 buyback of guns gave us only “an unexamined resolution that things were somehow better now”:

“This is the gun-control regime that our president applauds for its decisive resolve. It robbed Australians of their right to self-defense and empowered criminals, all without delivering the promised reduction in violent crime. Australia’s gun confiscation is indeed a lesson to America: It is a sign of what is to come if we hold our rights lightly.

“Somehow better now”, is how they refer to the 59% drop in homicides by guns in the 10 years following, and 65% drop in suicides with firearms.

The eye of the storm. The eastern states have shivered through some of the coldest July days on record, with snow, hail and rain leaving many of us wishing we were also stuck in Bali. Of course, these events need to have a catchy name for the media — and this one has ended up with “Antarctic Vortex”, which is quite punchy. But it turns out that the term isn’t really a scientific thing — according to Sharri Markson in today’s Media Diary, it was made up by News Corp journo Anthony Sharwood on Friday. Sharwood spent the weekend tracking and bagging news organisations that used his word — because it’s his word right, no one else is allowed to use it. Markson also took aim at Fairfax for using the phrase. Unfortunately, no one told Strewth second-stringer Christian Kerr that the term was out of bounds, or are only News Corp journos allowed? 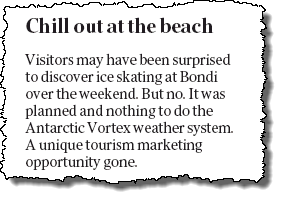 One for the ladies. This was spotted at the Bull and Mouth pub in Horsham, Victoria, by a tipster — where “ladies” get a separate menu item. We’re not sure if the cheaper parma (or parmie for those in the northern states) is because the serving is smaller, or a reference to the gender pay gap, but we’re choosing to believe the latter.