Think journos of competing news organisations can't get along? Turns out they can when they have a common enemy. Plus other media tidbits of the day.

Journos unite over ASIC registry proposals. Journalists from The Australian, The Australian Financial Review, The Sydney Morning Herald, The Age, the ABC, Sky Business, The Courier-Mail, The Guardian and The West Australian have signed a letter today emailed to Assistant Treasurer Josh Frydenberg urging him to scuttle any proposal to reduce the amount of information on company directors that is publicly available through the ASIC database. A total of 104 working journalists have signed the letter, which Crikey reported on last week. High-profile journalists such as Adele Ferguson, Nick McKenzie, Richard Baker, Kate McClymont, Linton Besser, Malcolm Farr and Janine Perrett have urged Frydenberg to “reject a misguided and wrong- headed proposal to remove important information from the public domain”:

“It would be a disastrous move, completely out of step with the requirements imposed on Australia by the worldwide trend towards greater transparency of ownership that has developed to combat tax evasion and terrorist financing.

“The Governance Institute’s statement that ‘making public, birthdates and place of birth details serves no useful purpose other than for persons with criminal intent’ (GI press release, July 6, 2015) represents, at best, total ignorance of how journalists use the database in their day-to-day work and, at worst, a shameful equation of journalism with criminality that you should reject out of hand.”

As Crikey reported last week, the Governance Institute argues its proposal is aimed at protecting directors from crimes such as identity theft. The Governance Institute’s director of policy, Judith Fox, told Crikey that the institute’s proposal was intended as a first step to addressing the concerns of the institute’s members, who fear the information everyone can access about them, which includes their residential address and date of birth. “We need sensible discussion about how third parties who need access to information can have access to the information they need,” Fox said.

“We put forward a really sensible proposal … to try and start the conversation about how to make it work.”

Media, Entertainment and Arts alliance Victorian media president Ben Butler described any proposal to remove the personal information of directors as “a proposal to gut journalism in Australia”. He said the information was vital for journalists to cross-reference directors across different databases. — Myriam Robin

What a load of croc. Crikey appears to have ruffled a few feathers with our media brief on Friday citing the success of the NT News’ departing digital team. While they didn’t say this to us, your correspondent wrote that the NT News’ recent digital success during the tenure of digital editor David Krantz and deputy digital editor Corey Sinclair (traffic has tripled, social media followers have doubled, etc.) was partly due to their strategy of tweeting in ALL CAPS.

But the all-caps strategy actually predates Krantz and Sinclair — it goes back to the former digital editor James Dunlevie (now at ABC News Darwin), who was understandably rather miffed about his successors being given the credit.

Dunlevie also objected to Sinclair’s comment to us saying under Dunlevie’s tenure, the Twitter account was used “strictly for branding with an occasional tweet”, telling Crikey that was a “load of croc”. He pointed us to this story, which details how the publications’ larrikin social media strategy, which includes the all caps, goes all the way back to 2012. For what it’s worth, it was Dunlevie who created the Twitter and Facebook accounts, and he was the first to start playing around with how to best represent the paper online.

It appears like many good ideas, the NT News’ online persona owes its birth to a few different people. Sinclair says Dunlevie built a “solid foundation” that he and Krantz expanded on. — Myriam Robin

Bad sports. Here’s some more bad news for embattled free-to-air and cable TV operators — sports, the biggest market of all, is losing its clout so far as ESPN, the world’s biggest sports network, is concerned. Cost pressures at ESPN, falling profits and especially a sharp slump in subscribers in the past year have sent a big signal that live sport is no longer the TV ratings and revenue nirvana that many in TV think it is (and are depending on, such as the Nine, Seven and Ten networks and Foxtel).

The latest Nielsen ratings data show that ESPN has lost around 3.2 million subscribers over the last year. That’s a fall from around 100 million homes to just under 93 million in the past four years. The pace of lost subscribers has picked up dramatically — for example, ESPN shed 912,000 in the year to July 2013. Live sport is seen as the last bastion for free-to-air and cable TV companies because it can’t be torrented and is the last bit of programming cable of assembling big audiences with the sort of demographics advertisers want. And ESPN has one of the biggest sports rights bills — it went up US$1 billion a year over the past two years. Coupled with the slump in subscriber numbers and income (around US$240 million a year in the past year and over half a billion a year based on 2011 subscriber numbers), it’s no wonder ESPN is looking to slice US$300 million from its costs over 2016 and 2017, according to US media reports.

But there is one bigger loser in the US cable TV world — The Weather Channel shed more than 10 million subscribers in the past four years, down to 89.7 million this year. — Glenn Dyer

Front page of the day. They’re even shivering in Queensland today … 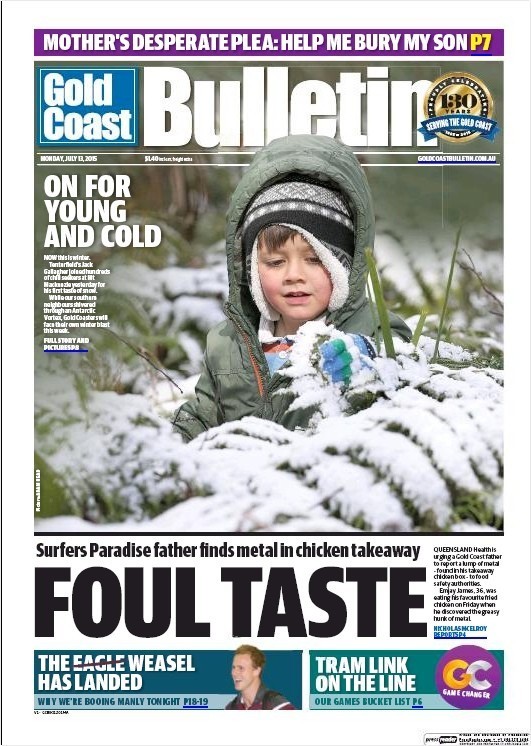 Frydenberg’s watchdog: is an ex-banker the best person to assess bank regulators?

Oh no, ‘Fowl Taste’ would have been much better. Missed opportunity …