In a hippie heartland, trying to sway the intractable anti-vaxxers

Is the government's new No Jab, No Play, No Pay policy designed to increase vaccination rates or raise money? Freelance journalist Kath Kenny journeys to a town at the heart of the debate. 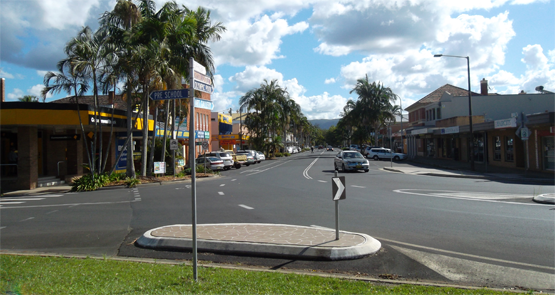 Mullumbimby, NSW, a hippie heartland since the 1970s, is one of those places where all the contradictions of rural life bump up against each other in the most incongruous of ways. To get there you pass through Queensland’s sugar-cane belt from the north, or the dairy and cattle farms of the NSW coast from the south. But once you land on the main street, it’s all sugar-free, vegan “raw bliss balls”, in a town where the old bank building has been turned over to an organic grocer and juice bar selling acai berry smoothies, a folk singer busking out the front.

Peruse the noticeboards and you can enrol in a Tigress yoga workshop, or organise an inspection of a demountable yurt (“$35,000 ono”). Or you could, like me, go straight to the conflict zone and meet with the Northern Rivers Vaccination Supporters (NRVS) — a voluntary group of mainly doctors and other health professionals (most of whom are also parents) who are trying to increase the rate of vaccination in the area — said to be among the lowest in the country.

“Fifty percent of kids here under five are not vaccinated,” says Rachel Heap, an intensive care specialist who has seen more vaccine-preventable diseases on the NSW north coast than anywhere else in 10 years working in regional and remote areas, including Alice Springs. In recent months, she’s seen whooping cough, chicken pox and at least three cases of epiglottitis — a potentially life-threatening infection that can cause the windpipe to swell, blocking the airway. “It used to be a nightmare 20 years ago. Thank god the vaccine came in and it vanished [from other places].”

For doctors such as Heap, the horror scenario is a bus coming through town from Byron Bay carrying a backpacker just in from Bali, where measles is endemic. “That bus is infectious for two hours after that backpacker leaves. It’s a chink in the armour.”

She says about half of the region’s unvaccinated children are registered as conscientious objectors — a category Social Services Minister Scott Morrison announced back in April would be scrapped from January 1 next year. Under the No Jab, No Play, No Pay policy, non-immunising families stand to lose thousands of dollars in benefits (exemptions will still apply to children who can’t be immunised for medical reasons).

The policy — and the scrapping of the exemption for “religious” objectors a few days later — was widely reported. But far less attention was paid to the item in the May budget, just a few weeks later, which claimed the measure would recoup savings of half a billion ($508.3 million) over five years. Is the policy designed to promote potentially life-saving vaccinations, or is it merely a cost saving measure?

The policy is already having an effect. “Pharmacists and immunisation providers up here reported that there was a big increase in vaccination uptake around the time of the announcement,” Heap said.

But it’s hard to pinpoint a single cause. Around the same time as the No Jab policy was announced, the widely reported death of Perth baby Riley John Hughes led to a spike in whooping cough awareness, and funding also became available for third-trimester booster shots for pertussis (whooping cough). “It was a perfect storm of three things that came together,” Heap said.

Dr Sue Page, a north coast GP, tells me “more people are coming in and getting more information, and more people are getting catch-up vaccinations. The biggest impact [of the policy] is it’s opening up the dialogue.”

Page has spent the best part of three decades in the region trying to counter anti-vaccine groups, which have advertised alongside doctors in the Yellow Pages and have relentlessly promoted “links” between vaccination and autism, cot death and arthritis. Now, the “money factor” seems to be kicking in, she says.

Often couples will be divided on the issue, and the one who has “felt most strongly about the issues has held sway”. The money has “given the other person another argument, it’s changing the dynamic between parents,” said Page, who has tried everything to help increase the rate of immunisation — mobile clinics, creating a shopping centre immunisation mascot, an echidna called “Spike”, hand-delivering information packs to journalists.

The anti-immunisation mindset is clearly a problem, she says, but so is the disorganised or disenfranchised mindset: one of the biggest non-vaccinating groups are families with more than three children where one of the adults has a chronic illness. And here’s where the more you talk to experts, the more the problem starts to look like one of those lenticular books, where the picture keeps changing depending on the angle you’re looking from.

Back in Sydney, I talk to Dr Julie Leask, a public health researcher at the University of Sydney and an expert in immunisation behaviour. She’s no apologist for anti-immunisers, but she has a number of reservations about the No Jab policy. While nationwide immunisation rates are at around 92%, the conscientious objectors represent less than 2% of non-immunised children aged six and under (as of December last year, 39,523 children were on the register).

Of the remaining 6% of families who are neither immunised nor recorded as conscientious objectors, about 2% are up to date, but their immunisation hasn’t been registered — perhaps “the doctor has simply not put the right forms in”, Leask says. The remaining 4% are those families who face various “barriers” — economic or social barriers, or they’ve been given incorrect medical advice, and so on.

That larger group of non-immunised children currently aren’t receiving the relevant benefits — and the new policy will do nothing to affect them, says Leask. At best, it has the potential to “publicise” the financial benefits people could receive if they fully immunise; but she thinks any benefit has to be weighed up against the downsides, including the potential to “radicalise anti-immunisers”.

Registering as a conscientious objector requires parents to have a conversation with a doctor, who must sign a form to say immunisation has been discussed. Doing away with a conscientious objector status “removes the opportunity for that conversation”, she fears. It could see some families go off the grid, medically speaking (and rumours of pop-up childcare centres for non-immunised children are already circulating).

At the moment, conscientious objectors only have to visit the doctor once. “It would be fairer to have vaccine objectors have to submit a form at the one-, two- and five-year-old milestones, not just once,” she has written. Leask also wonders if it’s fair to introduce what “amounts to a form of mandatory vaccination for lower-income families” without an accompanying “no-fault vaccine injury compensation system”. And there is no comparable welfare benefit that requires a particular health behaviour, she notes.

Failing to understand anti-immunisers will only produce “anger-based policy, not evidence-based policies,” Leask says. In the meantime, no one seems to be able to say for sure what’s working: the data showing whether vaccination rates are indeed up will take a while to come in, say health department officials I contact. Calls to Scott Morrison’s office were not returned.

It’s easy to find yourself nodding in furious agreement whomever you speak to (on the pro-immunisation side) in this debate, whether it’s those who talk about the responsibilities that come with rights, or with Heap, who has nursed a baby struggling to breathe, who is concerned for a friend with cancer who’s vulnerable to a child with measles, and who quotes the $10,000 per day it costs to maintain an intensive care bed.

At the rainbow-signed Mullumbimby Herbals, a homeopathy “dispensary”, I asked if the dispensary helped people who wanted alternatives to vaccination. “We don’t comment on that,” the manager told me, still smarting from a recent visit from Channel Seven,which “misquoted us”. Pressed, she just said: “We support choice.”

Mullumbimby might be a place where it’s possible to believe in almost anything, but it’s also more than possible to forget almost everything here too. To forget that — and there’s no subtle way of putting this — it was once home to a Bundjalung people, before diseases such as smallpox, measles and whooping cough did their deadly work.

And the vaccination rates of the indigenous community now? Up at 90% and higher, they are sky high, says Heap. Some groups, it seems, can’t afford to forget.

Anti-vax lawyer crowdfunds challenge to his suspension for crowdfunding

I sometimes wonder why such articles do not say much about vaccines that are withdrawn, restricted to age groups or that attract class actions.

Surely both sides of the argument should be shown.

There’s nothing like a measles outbreak to send hitherto non vaccinating parents rushing their kids to a clinic.

I have no problem with anti-vaxxers. Let them declare some uninhabited island or equally isolated place where they live in conscientous bliss, embracing whichever epidemics they like.

It seems however that Tony Abbott is across the Gardasil problems.