Back to the ’90s with Treasury’s right-wing reform boilerplate

The economic reform agenda of the head of Treasury is the same right-wing stuff we've been hearing for decades, Glenn Dyer and Bernard Keane write. 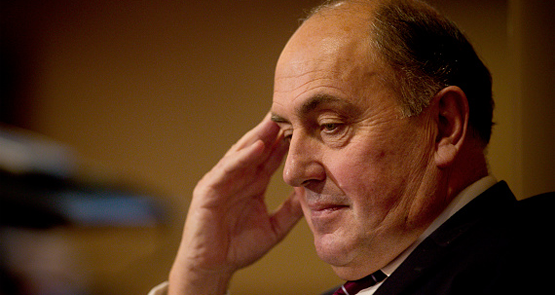 Last Friday, Tony Abbott’s hand-picked Treasury secretary John Fraser — he’s the one who replaced Martin Parkinson, who was deemed guilty by Abbott of Thought Crime and subjected to the world’s slowest sacking — gave the best economics speech of 1993.

It was an address to business economists called “Australia’s longer-term economic challenges“. “Longer-term” is right. This was a speech that could have been given a long, long time ago, the sort of stuff you’d expect to hear from an economist who rose in Treasury under the patronage of people like John Stone, the hard right head of the department in the late ’70s and early ’80s, back when industrial relations was heavily regulated (and, ironically, labour productivity growth was far higher than now). That accounts for why one of Australia’s greatest long-term economic challenges, climate change, was entirely missing from the speech (there is literally not one mention of climate). It’s not merely political convenience under a climate denialist government — Fraser hails from an era when climate change was just some greenie problem that could be safely ignored by economists living firmly in the real world.

Instead, Fraser offered the usual right-wing reform pabulum — cut taxes and deregulate industrial relations, although we’re intrigued by a quote from “John Stewart Mill”, presumably one of the lesser-known Scottish contemporaries of Adam Smith. And sadly there was no mention of the Prime Minister’s Grocery Code of Conduct, now one of bulwarks for the economy against the slide in the Chinese sharemarket and the instability in Greece and the eurozone.

Also missing — again, literally not a word — from Fraser’s speech was any mention of infrastructure, although he does talk vaguely about “road reform”, whatever that is. As we’ve noted recently, infrastructure is a key area of economic reform that has been allowed to collapse under the Abbott government, to the chagrin of both the Reserve Bank and the International Monetary Fund. Fraser sits on the Reserve Bank board with Glenn Stevens and would know that the RBA governor has been urging more, and more consistent, infrastructure investment by government, calling for “an agreed story about a long-term pipeline of infrastructure projects, surrounded by appropriate governance on project selection, risk-sharing between public and private sectors at varying stages of production and ownership, and appropriate pricing for use of the finished product”.

The absence of infrastructure was a bizarre omission, and perhaps reflects the growing embarrassment within the government over its awful infrastructure performance. Fraser’s speech was perfectly timed on that score, given we found out shortly afterwards that the government had given full vent to its passionate hatred of renewable energy infrastructure by demanding the Clean Energy Finance Corporation withdraw from wind and small-scale solar power PV investment.

While we’ve heard it all before on industrial relations reform — Fraser carefully skips over the rise in labour productivity and flat wages growth under the Fair Work Act compared to WorkChoices, and wouldn’t dare mention that Treasury itself told Peter Costello WorkChoices would cause a fall in labour productivity — he also articulated the new normal on tax. Under Fraser, Treasury has in effect surrendered to multinational corporations on tax, and now advocates a “don’t bother” approach to trying to force large transnationals to pay something even close to the level of tax Australian companies face:

“Unashamedly, I believe we are better-placed as a lower-taxing country than a higher-taxing one. That is a choice that we must make as a society. If society chooses to go down the high taxing, high spending route then that’s fine but the consequence will, I believe, be lower growth. The tax reform debate should also consider our international competitiveness – and that means looking at both our relatively high rates of tax and the tax mix.”

What Fraser doesn’t mention — this is a speech that is far more interesting for what it doesn’t say than what it does — is the massive scale of multinational tax avoidance. Our “relative high rates of tax” is a competitiveness straw man if you can treat the Australian tax system with contempt, as so many companies do, apparently without any concerns from Treasury.

It’s also profoundly hypocritical. Fraser wants big corporations to pay less tax (or, more correctly, go on paying little tax), but he wants the rest of us to pay more. In the budget he helped draft for the Abbott government, bracket creep will be the only thing making a serious dent on Joe Hockey’s budget deficit in coming years. It will also force middle-income earners to pay more in tax over the next three to four years than people on higher incomes.

There were other omissions, too. There was no acknowledgement that the budget’s forecasts for growth, jobs, exports and terms of trade look too optimistic given what is happening across the globe and the way the IMF keeps downgrading its forecasts for global growth (last week it cut growth to 0.2 points to 3.3% from its April forecast, the weakest since the financial crisis). Instead, it was a wishlist from for a right-wing world where the only real economic problem is how to make life easier for big companies.

If that’s the best Fraser can do, we’re in deep trouble if there’s another economic crisis.

Yes, Fraser’s 1993 speech was quoted in full with implicit approval in the Fin. But the Fin also looks at issues from the days when appeals for low tax, no security of employment and low wages are wanted by business and an firmly right wing government will deliver. Now they are talking about a double dissolution election built Abbott’s use of taxpayer’s funds to destroy the public credibility of his political opponents. Some might think this worse than the mis-use of taxpayers funds to promote the government, as Howard used taxpayer funds to promote the GST and Work Choices. The public needs a voice.

Also not getting a guernsey: education, research or science. All our future skilled workforce needs are going to be met through immigration, it seems.

And we pay these people?

Since John Stone was finally ousted from Treasury, Australia has been blessed with the best the public sector (or private sector) has to offer in the head of Treasury and the head of the Reserve Bank.

Forgiving their one miscalculation, the depth of the Paul Keating recession we had to have, the non-partisan heads of these two institutions have been the best thing Australia has had going for it, and have consistently come up with better policy than any other western democracy.

Another vital public sector position appears to have been politicised with this aberration. That may costs us very dearly.

To Mr Fraser, your right wing malarkey lost the argument, you guys have been consistently wrong. Learn from your errors instead of desperately seeking to repeat them.

This is what you get when you politicise the Public Service.

Sir Humphrey Appleby might have been a conniving so and so, but he was politically neutral and smarter than the politicians he served. I don’t think we can say the same about John Fraser.