Heydon’s history. It was a bruising encounter for Bill Shorten at the royal commission yesterday, and while he showed off his knowledge of mushroom sheds (which allowed those very clever subs and digital wizards at the Daily Tele to have a field day), he was taken to task by Commissioner Dyson Heydon, who asked Shorten to curb his rambling answers and questioned his credibility as a witness. It was quite the intervention, which one tipster found interesting, as Heydon has long advocated for a non-interventionist judiciary. In a speech at a Quadrant dinner in 2002, Heydon took aim at activist judges, saying that law making should be left up to politicians:

The party’s over. The Australian Electoral Commission’s list of parties that it is considering deregistering is getting quite long, which isn’t too surprising now that we are almost two years on from the 2013 election (yes, almost two years, can you believe it?), which had a plethora of minor issue parties to take up the ballot paper. Eleven parties are currently facing the axe from the AEC, including a few that came close to getting elected last time. The Australian Sports Party was added to the list this month, and when we tried to contact them to find out if they’d fight the ban, their website didn’t have any reference to sport anymore — or at least we think it didn’t, it was all in Japanese, and it seems to be about getting loans through loan companies. Luckily for people who like added sport in their politics, the Glenn Lazarus Team was officially registered today. Other minor parties on the way out include the Coke in the Bubblers Party, the Voluntary Euthanasia Party and the Wikileaks Party. We couldn’t get official word from anyone at the Wikileaks Party on whether they planned on fighting to stay registered, but one insider was resigned to the party’s demise, saying that the controversy over the party’s preference flows at the last election lost them an opportunity to get elected. For those who were hoping we may have seen peak micro-party already, it doesn’t look like it — the Australians Against Paedophiles Party and the Australian Liberty Alliance applied for party status last month.

How embaressment. Most NSW fans tried to disappear inside their couches on Wednesday night, hoping never to hear the words State of Origin again. Not the Daily Tele though, which seems to have no shame. Now we know why — they can’t spell “embarrassing”. This headline was captured by one of our spies last night, but has been changed now.

Who watches the watchmen? It’s the lens through which we view our politicians, but we don’t often think about the parliamentary press gallery itself and the role it plays in our political discourse. Now the press gallery has turned its eyes on itself, publishing a comprehensive history on its website. Written by ABC cameraman Nick Haggarty, it chronicles the way journalists covered the first sittings of Parliament in Melbourne, and the rise of radio, television and the internet as well as the way relationships between politicians and journalists have changed over time. It was hard to pick an anecdote to share (read the whole thing), but we particularly liked this one about press gallery pioneer Gay Davidson:

“The blokey culture of the Canberra Press Gallery never caused Gay Davidson [the first woman to head a press gallery bureau and the first female press gallery president] to pause. Indeed, at one point, she sought and obtained permission to use a male toilet, near her office in the Press Gallery, because the nearest women’s toilet, at that stage, was ‘too far away’. Gay explained, as she pressed her case, that there would be ‘no embarrassment’ as most of the men in there would be ‘facing the wall’.”

Beauty’s in the eye … As well as the winner of the Packing Room Prize, yesterday also marked the announcement of the 47 finalists in the Archibald Prize, with many familiar faces across the list. While the portraits of Jacqui Lambie didn’t make the cut, Stewart MacFarlane’s portrait of Cory Bernardi did. It’s an unsettling image, in which Bernardi looks quite menacing. It’s like a scary Mona Lisa — what is making him stare so intently? 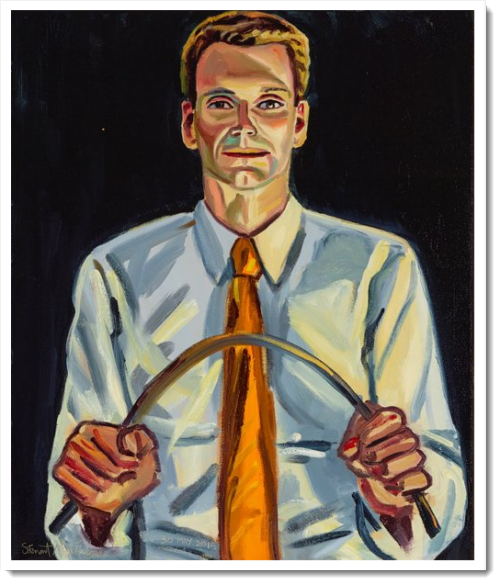 Away they run? We hear there’s movement at the station at Ernst and Young in the nation’s capital. A tipster says “Apparently Ernst & Young is going through another round of senior staff walk-outs in Canberra. At least eight have moved to Deloitte in just the past few weeks with others going to other competitors.” We put that to Ernst and Young, but a spokesman denied it: “There hasn’t been any significant increase in people  turnover in the Canberra office — in fact we have just recently announced a record number of partner appointments, with other appointments soon to be announced.”

Perfect one day… The Queensland LNP conference is on at the moment, and they have nailed the perfect merchandise for the occasion: 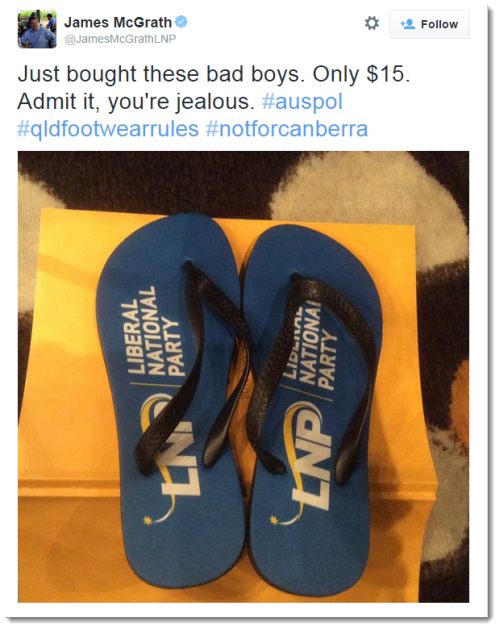 The LNP thongs are a good example of kultur difference – it is a constant trope in muslim lands that the Other (Shia/Sunni depending on locality)writes the name of allah on their sandals.

Perhaps Bernardi is witnessing someone proposing to their dog?

Heydon has taken Shorton to task for treating the RC and Stoljar as a joke.

Shorten has certainly treated this Royal Commission as a joke.

But when Shorten is asked to comment on an email from four years after his exit from the union, it kinda shows the fact that this RC is nothing more than a joke. To be kind, you might suggest it as a smear campaign.

This drivel will hurt Shorten no more than previous drivel has hurt Gillard.

The real victims are Heydons legacy and the non-existent future reputation of Stoljar. He has turned himself into the Federal version of Tim Carmody without even making it to the bench! By going through this charade, they had prostituted themselves and all future RC’s.

The one upside of this clu——ck is the series of new royal commissions for the next government.
RC into sub tender process.
RC into Liberal Party fundraising.
RC into Liberal Mafia connections. (Julie Bishop will be a star performer for THAT one.)
RC into Lib mining agreements. Barnaby?!
RC into illegal maritime activities. (ScoMo? Dud?)
RC into Newscorp tax arrangements.
The list goes on and will no doubt be HUGE fun for the punters.