Barnaby Joyce has rejected Tony Abbott's efforts to accommodate his grievance about the Shenhua mine. And that means he should resign from cabinet. 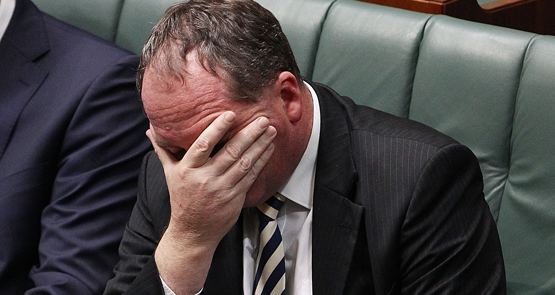 Cabinet government has proved a reasonably resilient and worthwhile institution in Australia. The idea that the senior members of the party in power should be able to discuss policy confidentially, without worrying about how their views would be interpreted in the media or publicly, is a good one, and cabinet documents are rightly protected from public view until a sufficient period of time has passed to make their revelation politically innocuous. Central to the idea of cabinet government, too, is that once a decision is made, all ministers back it and defend it, regardless of their personal views.

That doesn’t mean cabinets don’t leak, of course. And leaking has become a more persistent feature of Australian politics in recent years. The Howard cabinet was well-disciplined until after 2005. Labor had its own well-known cabinet leaker. Neither can compare, though, to the Abbott cabinet, from which leaks flow with such detail that one feels as if one is there in the cabinet room with the Prime Minister and his colleagues. Education Minister Christopher Pyne has publicly acknowledged this, saying he’ll be keeping his cabinet comments circumspect from now on, out of concern that anything he says will end up in a newspaper.

That’s highly damaging to good government. Whatever you might think of Pyne or any other minister, the national interest is served by he and his colleagues being able to debate policy freely in-house.

That brings us to the other cabinet problem, Barnaby Joyce. The problem with Joyce isn’t leaking. His problem is, he wants to be both cabinet minister and backbencher, according to the issue. Whatever the merits or otherwise (generally, in my view, the latter) of Environment Minister Greg Hunt and his approval of the Shenhua mine, Hunt has a legitimate expectation that his cabinet colleagues won’t undermine him publicly — indeed, that they will support his decisions. Being a cabinet minister is hard enough without your own colleagues getting stuck into you in public. Whether you win or lose the debate in-house, as a minister you go out and support the government’s position — which in this case is that, subject to further state government processes, there is no reason for the Shenhua project not to proceed.

Apparently, though, that doesn’t apply to Barnaby, who has blown up about it — reflecting the fact that he and seemingly every farmer in the affected region are deeply concerned about the effect of the project on groundwater. Their concerns may well be valid. But that doesn’t get Joyce off the hook. Fortunately, he has been indulged by the Prime Minister, who has tried to downplay Joyce’s renegade act by saying he’s merely acting as a local MP.

But today, Joyce directly contradicted him, saying he opposed the mine in his role as Agriculture Minister.

Just be clear on that — the Prime Minister specifically gave Joyce an out on this, by portraying his dummy-spit as Joyce acting purely in his local capacity. That still doesn’t fit within the idea of cabinet government — you can’t be both cabinet minister and backbencher — but it could have covered the situation politically. But Joyce refused to take that opportunity, preferring to highlight his opposition as a cabinet minister.

That’s the red line, both politically and in terms of what’s left of good cabinet process under this government, and Joyce has crossed it. The Prime Minister has bent over backwards to accommodate him, and had his efforts thrown back in his face. Both Abbott and Hunt have a right to expect Joyce will follow the basic rules of cabinet solidarity, and Joyce has failed to provide it. Why should any other minister who takes a dislike to a government decision now defend it publicly? And what sort of example does Joyce set for his colleagues, given he is Deputy Nationals Leader and likely leader of the party after the departure of Warren Truss?

Joyce should resign. You can’t be both backbencher and cabinet minister — especially after you’ve ostentatiously rejected the efforts of the Prime Minister himself to accommodate you in exactly that manner.

Abbott and the Cabinet are probably sympathetic to Joyce’s plight and will be O’K to let him Whinge for a while in the hope that this issue will soon blow over and the status quo restored. The problem for Joyce is that this issue has the potential to get significantly worse. People are already calling the Liverpool Plains “the next Franklin” and as the mine development gets close or indeed commences operation, people will gather from all over Australia to fight it. And Tony Windsor will become their champion. Barnaby Joyce’s whole political future in what is a safe National Party seat may well end up in ruins

Then again this government has trashed so many conventions, what’s one more?

I do like seeing a safe ministers seat, become not so safe.

Am I right that Tony Windsor was a National MP? How long did he hold the seat as an independent?