What would happen if we in the West realised how imaginary and counter-productive vast debt levels are? 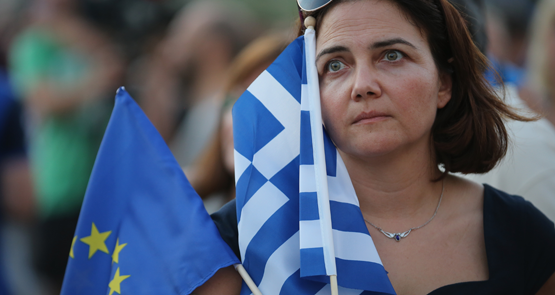 The Syriza government of Greece has concluded a deal with the European Union, five days after a referendum in the country overwhelmingly voted to reject the terms of the last deal demanded by the financial powers. The new deal — which the EU had said would not be made — enacts the substantial will of the people, pushing the emphasis for increased revenue onto tax gathering, rather than cuts to services, especially pensions. However, there is some phasing out of certain pension payments and a raise of the retirement age. The deal also includes a haircut for the creditors, though this will be disguised by extension of yield terms and changes to debt-servicing conditions — to allow northern politicians to conceal it from their voters.

The deal represents a victory for Syriza, though it won’t be portrayed that way by either the right, lazy financial journalists, or sections of the further left. Syriza was faced with a dual challenge: to end the ideological austerity war being waged on the Greek economy, which was pushing it deeper into depression, and to lessen the burden on the poor, with starvation and lack of medical care cutting a swathe through Greek life. The Syriza centre never wanted to leave the eurozone, nor did the majority of the Greek people, so their room to manoeuvre was strictly limited.

The reporting of the deal as a “tough new austerity deal” is bewildering, parrot financial journo groupsquawk, which appears to lump in tax increases with service cuts as all being austerity. The new deal keeps budget surpluses at 1%, 2% and 3% for the next three years — down from the EU’s initial demands, which started at 3% and went to 4.5%. Other measures are increases in VAT on luxury and non-staple items to 23%, a special luxury tax on other selected items, increased tax on shipping companies, and a raise of the corporate tax rate. The one major austerity is a phasing out of the “ekas” pension supplement payment — simply a part of the pension paid as a year-end lump sum — which will be gone by 2019. Some austerity. In return for this, Greece gets 54 billion euros in debt relief. It’s a measure of how ideological the demands on Greece are that the corporate tax rate is lower than Syriza wanted to make it — 28% instead of 29%. What Prime Minister Alexis Tsipras’ government has been fighting all along is the demand that the EU be able to dictate the minutiae of Greek economic reform, emphasising spending cuts, which are, in turn, deflating the economy.

The making of the deal has ended the blackmail being practised this week by the European Central Bank in denying liquidity to the Greek central bank, with the tap turned back on — until Sunday, when all representatives of all 28 EU heads of government will meet to ratify the deal. This will, as always, come down to a German lead. Any deal with any debt forgiveness faces challenges from small nations with new right-wing governments such as Slovakia and Finland, but they should be brought into line by Germany.

Should the deal not be ratified, liquidity will cease once more — with cash reserves exhausted — and the country will be plunged deeper into crisis. At that point emergency food and medical aid will need to be supplied, and some form of IOU/parallel currency system introduced for civil service payments, pensions and benefits and the like. The EU would return to the old deal that Greece rejected in the referendum, Greece would reject it, and then all bets are off. Tsipras and the Syriza centre might try a switcheroo — suing the EU in the European Court of Justice for illegally denying them ECB liquidity. Since there is no provision to throw someone out of the euro, they may be on solid legal ground — the strategy could be far from Pyrrhic, since it would allow for the legal cancellation of all Greek debt to the EU.

Alternatively, Tsipras and Syriza would resign, and let someone else try to accept and implement a deal. Or they could stay, and (with or without Tsipras as PM) de facto take Greece out of the eurozone with a fully parallel currency, while maintaining that it’s still in it. Or Greece could bite the bullet and perform the much-spoken of “Grexit”. Though many of its supporters, and an increasing number of Greeks are pushing for such, Syriza believes that they are not fully aware of how difficult such a move would be, and how much of a crisis it would prompt. Were they to leave the eurozone, and even the EU, nationalist politics of the ugliest sort would be given a boost, and a rationale. The winner might well be the neo-Nazi Golden Dawn Party.

Whether Greece should leave the eurozone and try to tough it out — immediately shaking off 100 billion euros debt in a stroke — is a purely political question. But Tsipras has got a far better deal out of the EU than anyone else has managed. Nevertheless, beatings will continue until morale improves. A 100% forgiveness of all Greeks debt would be about 20% of the debt forgiveness handed to the banks after the 2008 crash — so that the brave “free enterprise” economies could continue. The true function of the sadism applied to Greece is to enforce the idea that debt is something that applies absolutely to people, without negotiation. People in the West, bent double under unaffordable housing, student loans and usurious credit card interest rates, can then be encouraged to see themselves as good and dutiful debtors, compared to those “bad” debtors elsewhere. More than a touch of white skin/brown skin racism helps.

For if it were truly revealed how negotiable debt is, how imaginary much of it is, if that were done over there, what then over here?

Well it looks like a handsome win for Syriza to me. The ongoing problem of course is that the EC has yet again failed to address the problem that pervades is across the whole continent – the lack of political will to address eternal deficits, locked up in the straightjacket of onerous labour and social welfare regulation.

So Greece can celebrate but the whole continent is headed for a dismal next five decades where tourism of historical sites by Chinese tourists will most likely become Europe’s economic mainstay.

And even that will collapse, David, as readily available cheap non-renewable resources funding our current lifestyles plunge.

The pro-One Percenter Eurozone and IMF demand timely repayment of Greece’s Government Debt but ignore the huge Carbon Debt of major industrialized countries like Germany that measures huge and deadly global environmental damage. The per capita Government Debt plus Carbon Debt (2013 data; US dollars ) is much greater for Germany ($36,219 + $108,298 = $144,517) than Australia ($29,958 + $85,858 = $115,816) or for Greece ($38,440 + $52,765 = $91,205) which should insist with indebted Developing Countries that inescapable Carbon Debt is also put on the repayment and global action discussion table (see Gideon Polya, “Germany’s Per Capita Government Debt Plus Carbon Debt Greatly Exceeds Greece’s”, Countercurrents, 8 July, 2015: http://www.countercurrents.org/polya080715.htm ).

Indeed the direst 2015 estimates of Carbon Debt (taking into account methanogenic livestock and the upwardly revised Global Warming Potential of methan) are that the World (2015 population 7,325 million) has a Carbon Debt of US$270 trillion (about 3 times the annual world GDP of $85 trillion and about $36,860 per capita) that is increasing by about $10 trillion each year – Australia (2015 population 23.9 million) is a world-leading annual per capita GHG polluter with a Carbon Debt of US$5.6 trillion ($234,309 per capita) that is increasing at $300 billion per year or at $30,000 per head for under-30 year olds (see “Are we doomed?”: https://sites.google.com/site/300orgsite/are-we-doomed ).

Read FAIR (Fairness and Accuracy in Reporting, ) on the performance of US media on Greek debt: it’s precisely as Rundle describes – apart from columnists like Nobelist economists Stiglitz and Krugman, who know a crock when they see one. And NPR, which interviewed Costas Panayotakis, professor of sociology at NYC College of Technology at CUNY and author of Remaking Scarcity: From Capitalist Inefficiency to Economic Democracy, whose point of view is stated in the title of his book. You don’t get free markets by giving predatory capitalism free rein. Oligopolistic anarchy at the top does not result in free and democratic process – the price of THAT freedom IS eternal vigilance, and action, by ‘we the people’. You forget that at your peril – which of course is where we are.