Maverick candidates have caused a lot of headaches for the LNP over the years, both in the states and federally. Now Queensland's state branch wants to do something about it. 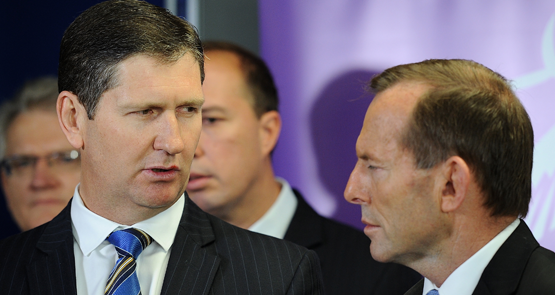 Six months on from a bruising state election defeat, Queensland’s Liberal National Party gathers today at the Brisbane Convention and Exhibition Centre for the start of its three-day state convention.

Wide-ranging insights into the concerns of the party membership are provided by the resolutions scheduled for debate, including proposals to abolish bike-helmet laws; require that foetuses be given pain relief in late-term abortions; demand of new immigrants an affirmation of support for “fundamental human rights”; and hold off signing an international climate-change agreement that “jeopardises Australian national sovereignty”.

Interesting as such discussions may well prove, the event is perhaps more notable in being one of the five-yearly conventions that are empowered to change the party’s constitution, and only the second convention to have this status since the state’s National and Liberal parties merged in 2008.

To this end, the party charged a three-person constitution review committee with evaluating proposals put forward by party branches and offering recommendations of its own.

Whereas Labor has responded to recent electoral disasters by taking hesitant steps towards democratising preselection and empowering party members to participate in leadership ballots, the LNP review committee recommends only technical changes to preselection procedures, and has rejected a branch proposal to broaden leadership election by granting a say to the state council.

Instead, a rather curious theme emerges from the sum of its proposals — the need to spare the party from embarrassment at the hands of errant candidates and members.

One proposal involves giving teeth to the rule that preselection candidates are not to discuss the process with the media. Those who do so would find their candidacy terminated, to be reinstated only by leave of the party’s upper echelons.

The state executive would further gain powers to disendorse candidates, which, at present, is effectively the preserve of the much larger state council, and have an easier time of rejecting preselection applications from candidates it deems unsuitable.

It would also become easier for the state executive to expel, suspend or censure party members over matters including “conduct substantially embarrassing to the party”.

To a large extent, the impulse behind such proposals is understandable. Since parties are charged with enlisting the services of many dozens of election candidates, it’s an inevitable hazard of the game that one or more will betray ill-discipline or inexperience at a sensitive moment.

This can all too readily put a scent of blood into the nostrils of journalists eager to add a bit of colour and controversy to otherwise stodgy campaign reportage.

That such candidates are often just ballot-paper fodder in unwinnable seats tends not to feature in calculations as to their news value.

At the last federal election, the Liberals were left unrepresented in the Newcastle electorate of Charlton after it emerged that their candidate, Kevin Baker, had run an online forum for car enthusiasts that contained numerous blokey indiscretions relating to women and racial minorities, some of the milder examples of which were from his own hand.

During the 2010 campaign, the Liberals disendorsed David Barker in the Sydney seat of Chifley after he wrote on Facebook that Labor threatened to bring Australia “closer to the hands of a Muslim country”. This was particularly ill-judged given that his Labor opponent, Ed Husic, was shortly to become the first ever Muslim member of federal Parliament, and had been on the receiving end of a bogus pamphlet playing off his background when he ran for the seat of Greenway in 2004.

Neither of these indiscretions related a seat the Liberals had a realistic chance of winning. However, this was also presumed to be the case in 1998 when the party cut Pauline Hanson loose in Labor’s Queensland stronghold of Oxley, after she criticised welfare to Aborigines in a letter to a local newspaper. On that occasion, the publicity Hanson attracted enabled her to pull off a surprise victory under her own steam, thereby initiating her brief but tumultuous political career.

That Queensland should furnish an exception to the rule is instructive, as the state’s remarkable record of electoral volatility means it can never be taken for granted that even the safest of seats won’t produce a boil-over. Campbell Newman discovered this to his cost, suffering repeated headaches from troublesome backbenchers who were swept into Parliament by the 2012 landslide.

Similarly, Labor’s lax candidate vetting procedures have been causing Annastacia Palaszczuk’s government trouble from day one, on account of Cook MP Billy Gordon being kicked out of the party days after his election for his lack of candour in relation to past criminal convictions.

With all that in mind, it’s perhaps no surprise that the LNP should be sensitive to the need to keep its foot soldiers on a tight leash.

But it’s no less true that the party can ill afford to be too repressive towards dissenting voices, given the fruit borne of Newman’s dictatorial approach to party affairs in his short tenure as premier.

Proposed changes to the party constitution are far from the only indication that this lesson may not have sunk in.

The most troublesome member of the LNP’s retinue of federal MPs over the past few years has been Teresa Gambaro, who served throughout the Howard years in the marginal northern Brisbane seat of Petrie, and returned to Parliament in 2010 as member for Brisbane.

Gambaro has been a frequent critic of Tony Abbott’s policies and performance, and was one of the most vocal dissenters at the time of the Liberal Party leadership spill vote in February.

For her troubles, she now finds forces being marshalled against her in support of a preselection challenge from National Retail Association chief executive Trevor Evans.

According to The Courier-Mail, Gambaro stands in serious danger of losing, despite fears in the party that such a result could end up costing it her crucial marginal seat.

Election review reminds us that nobody does failure like Labor

Round and round: the perennial appeal of the campaign bus

I assume this means you’re hoping the Coalition don’t become as hard-line and bloody-minded as the ALP has been throughout our History? If so, why not spell it out more vigorously?