THE GENIUSES BEHIND THE NT NEWS' TWITTER STYLE ARE MOVING ON. Plus other media tidbits of the day.

NT News’ digital gurus move on. In the past year and a half, the NT News’ social media followers have doubled, while its web traffic has tripled. That’s largely come down to a radical rethink of its digital approach about a year and a half ago, led by digital editor David Krantz and deputy digital editor (and columnist) Corey Sinclair.

But both men are now moving on to other roles. Sinclair has been promoted to News Corp HQ in Sydney, while digital editor Krantz, who also managed social media, is soon to join the Daily Mail Australia as homepage editor.

“Dave and I have been managing the social media accounts and website for about a year and a half,” Sinclair told Crikey. “Before we took over, the Twitter account was just used strictly for branding with an occasional tweet, but we made the conscious decision to expand it and make our presence more known.” This has taken the form of tweeting only in all caps, starting tongue-in-cheek Twitter wars with other outlets, and doing all they could to reflect the irreverent tone of the print NT News. 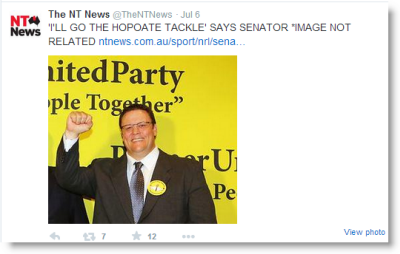 Asked what they’ll miss the most about running the accounts, Sinclair nominated developing the paper’s online larrikin persona. “There’s not many places where you’d be able to create cheeky mischief and write dick jokes or innuendos as part of your job.”

Krantz says he’ll just miss the power. “I’ll miss starting pointless Twitter wars with other media outlets like The Guardian and having a platform to denigrate ‘freelance writer’ J.R Hennessy.”

J.R. Hennessy is a freelance comic writer from Sydney. Your correspondent has never met, read or had anything to do with him, but it’s fashionable in some media circles to pay him out for some reason. — Myriam Robin

Seven cashes in. Here’s a spoiler. On Monday the ABC’s Australian Story will screen part two of its Gina Rinehart special, which will focus on her life following her first divorce, a period that includes plenty of litigation, including a battle with her children that stretches on to the present day.

Channel Seven’s Sunday Night is clearly aiming to cash in on the attention, as over the weekend, it will screen an exclusive interview with Olivia Mead.

Mead is the granddaughter of Peter Wright, Lang Hancock’s long-time business partner, who earlier this year secured a $3 million payout after suing the executor of her father’s will. Seven is playing up the parallels with the Rinehart family dispute, calling it the “untold story from the other side of the Hancock partnership”. — Myriam Robin

Rundle v Hendo, the magic continues. Readers wishing to end their own lives and unable to obtain Nembutal may have been following the ongoing dispute between myself and Gerard Henderson’s Media Watch Dog, regarding things that were said and done about Pol Pot’s Khmer Rouge government in the 1970s. To recap: former Whitlam minister Tom Uren made a couple of stray remarks of praise concerning the Khmer Rouge, which got Gerard excited. He got even more excited when we pointed out that he — Henderson, that is — was a staffer in the Fraser government, which recognised the Khmer Rouge as the legit government of Kampuchea/Cambodia after they had been turfed out of power by the Vietnamese invasion of 1979. The Fraser, Reagan and Thatcher governments backed the Khmer Rouge as it regrouped in a jungle enclave, with the intention of retaking power in the country. Such support extended the life or the organisation and its reign of terror by years — indeed, the Thatcher government extended SAS training to KR militias, even when they were raining terror down on the peasants under their control.

We suggested that governments giving material support to the KR was a lot more significant than a few remarks made about them when it was still believed (by some) that stories about their regime had been fabricated by Western propagandists. Hendo responded with some inaccurate remarks alleging that the magazine Arena (which I once co-edited, long after) had supported the KR. We hadn’t, though Hendo found a piece with some pro-KR remarks by the Maoist Albert Langer, later a left supporter of the Gulf and Iraq wars, and much feted by the right for such. Hendo apparently missed a long piece Arena published by Robert Manne, savaging Western apologists for the KR, and published in the spirit of pluralism that right-wing magazines such as Quadrant never managed at the time.

Now, fresh meat. In the intervening period, Wikileaks released 250,000 new documents into its “Plus D” website database. Declassified diplomatic cables from the Carter years, they include this gem from November 22, 1978:

Plus D is a great resource for stuff hiding in plain sight. In this case, reports that the Oz government (GOA in the cable, Government of Australia) was moving forward on recognising the Pol Pot government even before they were turfed out by the Vietnamese — which is often taken as the pretext for recognition of the KR by Western governments. As the report notes (summarising and confirming an insider report in the AFR), Gerard’s employers weren’t hugely concerned about the human rights angle:

“GOA DOES NOT WISH ISSUE TO BECOME EMBROILED IN HANOI/ MOSCOW PEKING/PHNOM PENH CONTROVERSY” BUT RECOGNIZES THAT ANY GESTURE TOWARD KAMPUCHEA CANNOT AVOID THE APPEARANCE OF FAVORING ONE SIDE OVER THE OTHER. … AUSTRALIA’S FORMAL LINK WITH KAMPUCHEA MIGHT BE ARRANGED THROUGH BANGKOK, RATHER THAN PEKING AS IN THE PAST, THUS GIVING THE APPEARANCE OF MORE BALANCE REGARDING SINO-SOVIET DIFFERENCES IN INDO-CHINA. EVIDENTLY GOA HAS NO THOUGHT OF OPENING AN EMBASSY IN PHNOM PENH IN THE FORESEEABLE FUTURE.”

So there you have it. We have the Liberal-National government for which Gerard worked, actively seeking to bring Kampuchea in from the cold. Gerard has, most recently, a Noam Chomsky book he appears to have fished out of the $2 bin at a second-hand bookshop. Seems to me, by Nuremburg rules, Gerard’s involvement verges on active collaboration. Still, I’m sure he can find some stray pro-Pol Pot remarks from the time. Try the works of Keith Windschuttle, Gerard — he was a big wrap for the men in black at the time. Till then …. — Guy Rundle

Videos of the day. We could not decide between Clarke and Dawe’s wonderful take-down of Malcolm Turnbull, Charlie Pickering de-flagging the Prime Minister, or Jacqui Lambie’s confusingly edited attack on Barnaby Joyce. But what the hell, it’s Friday, and everyone just wants to watch YouTube clips. So we present all three: 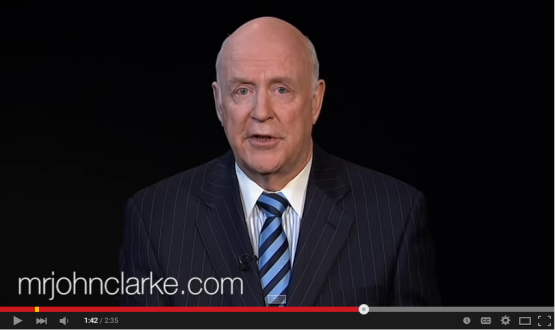 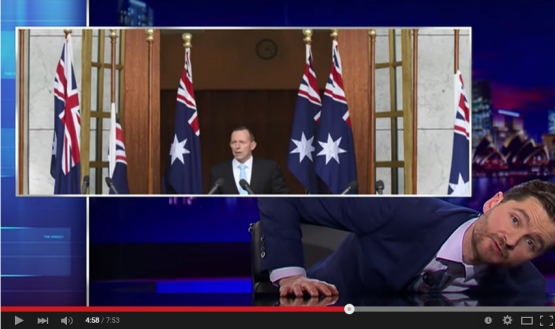 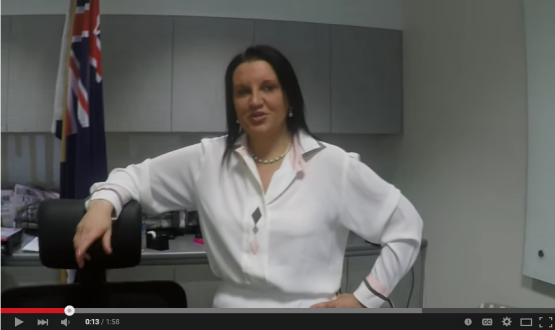 hahaha, the de-flagging video is great. Thanks.

It’s good that you’re raising (an admittedly small and misleading sample of) the currently ignored important issues of that period. As someone who was heavily involved at the time I’ve frequently sent Crikey relevant information but [as is the case with so many Crikey Censorship positions] readers will be lucky if they’re allowed to see them.

Good on you Guy for further exposing Australia’s connivance in the fate of poor Cambodia. That sad sack Henderson will never admit defeat however. I am in Cambodia again today and the building boom continues unabated, more 7% growth this year. But the war was very long and totally devestated the country and its people.Although the Vietnamese invaded on Christmas Eve 1979 and within weeks rolled up the KR thanks to our support the war continued. Battambong, the second largest city was taken briefly by the KR as late as 1997. And we know now that US bombing started in 1965, so thats a war that lasted more than thirty years.
And the greatest irony of all? The current government are nearly all ex KR commissars.

Henderson engaged us during his nitpicking conflict with Mark Latham, has Rundle now replaced the latter as Gerard’s plaything?