If Greece defaults, it will join an illustrious club of debt welshers (including Australia)

Most of the world's economic powerhouses (including Australia) have been in sovereign default at one time or another, writes economist and freelance journalist Jason Murphy. 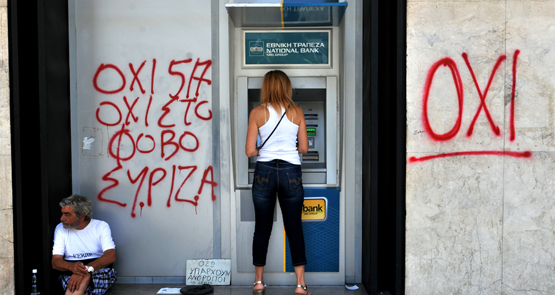 Greece has missed its big payment to the IMF (1.5 billion euros) and — unless a last-ditch effort to secure a bailout is successful — is set to miss an even bigger payment to the European Central Bank on July 20 (3.5 billion euros). In theory, this is a shock. Governments should be able to pay debts. Should we be worried about Greece going into default?

Unlike businesses, governments can change laws to appropriate funds from their citizens (we call that tax). This unique power is why government debt is seen as the safest asset class. If government debts aren’t repaid, it starts to look like the whole fabric of the global financial system is coming apart.

But in fact, sovereign defaults litter the economic history of the world. They cause stress at the time, but curiously, have failed to punch a hole in the economic growth of the globe.

The list of nations that have defaulted in their history includes the rich and powerful: Germany, the United States, Canada, France, Japan and Australia.

That’s right. A little-remembered incident in Australia’s history is when the NSW and the Commonwealth governments failed to repay creditors. That happened in the midst of the Great Depression — 1931. Australia’s government debt-to-GDP ratio was over 200%.

Debt defaults don’t always involve debt being written down to zero. In some cases they are restructured so creditors get cents in the dollar (aka a haircut). Much like trimming the locks of a screaming toddler, a haircut is not always easy.

Take Argentina’s case. The country defaulted in 2002. Argentina was able to get 93% of its creditors to agree to a reduced payment. They accepted around 30% of the value and deferred payments.

The remaining 7% held out and took Argentina to court in the United States (which had jurisdiction, for complex reasons) and won the right to a full payout. Argentina isn’t paying these creditors, and because paying anyone at all might trigger a right to the original full payout, it is now not paying the other 93% either.

Debt restructuring may be common, but there is no simple single set of rules about it. That’s something many observers think must change. As Joseph Stiglitz argued in 2014:

“With recent court rulings showing how unfairly countries may be treated without an international rule of law on debt restructuring, it is becoming ever more urgent that world leaders make its creation a priority.”

“If there is one lesson from Argentina’s experience, it is that debt sustainability and economic growth go hand in hand,” wrote Argentina’s ambassador in a letter this week to The New York Times.

Luckily, in a democracy, re-establishing trust can be as easy as having an election. A nation is not like a person, cursed forever with a reputation. It’s reputation can change with its leadership.

In the case of NSW, after it defaulted, premier Jack Lang was booted out by the governor of NSW. The new government passed laws committing it to good behaviour, and smooth sailing resumed.

In Greece this can happen via a new election. Syriza, which has got Greece to this point, may have to be replaced to get Greece out the other side again.

The process looks crazy. Greece will write off its debts, only to start accruing new ones. But that is the way out for Greece. It needs to free itself from the over-valued euro, from crushing debt repayments, and from grinding austerity. Only then can the natural growth capacity in the economy be re-established.

That’s not to argue the above is sufficient. Greece also needs to change its ways. Tax evasion has always been a major problem in Greece, with some claiming the amount of missing tax is greater than the amount that would have been needed to pay the debts. Tax must be paid in future.

But a unique opportunity exists thanks to recent advances in technology. In moving back to the drachma, Greece could move to a cashless, or near-cashless society. Cashlessness is being mooted as a potential boon for governments combatting tax fraud.

If drachmas are printed, they will circulate in the black market, and that will mean the government misses out on tax. But if Greece goes cashless, it could help create an honest, functioning economy. That would be a real triumph.

I would think that restructuring the taxation system and closing loopholes would be one of the first things a government would do, left or right, this transcends politics. It may be unpopular but there is simply no other way for the country to pull itself out of this dreadful economic contraction and subsequent spiralling into depression. Whilst it wouldn’t solve this current situation – a massive injection of stimulus is needed to restart the economy- it would demonstrate to its lenders that it is serious at structural reform. Imposing further austerity on the poor Greek people is akin to flogging a dead horse.
I can’t help but recall the period in which Germany was forced to pay war reparations after the first world war, further dragging a defeated populace into misery. This created a fertile environment for the rise of the National Socialists. There is already a neo Nazi party in Greece. We don’t history to repeat itself. The Greeks need help, and we cannot abandon them to misery, poverty and penury.

I visited Southampton in 1971, when the Southampton Bank was taken over by the National Westminster Bank. It made the BBC news that there was a deposit to the credit of the NSW govt. for the amount that the former Premier Lang had said had been paid to “the English bankers”. The Commonwealth Bank was built of the bones of the State Savings NSW Bank, and the pennies of my aunts, during the depression, because they believed the bankers, not JTLang. So NSW did not default after all, and my poor aunts had their savings misappropriated by a gormless Commonwealth. NSW lost a Premier, a credit rating, and who won? The English bankers! Shame. Rosemary Lynch