Australia … waiting endlessly in the desert of disillusion

Voters sense neither Tony Abbott nor Bill Shorten are up to the job of leading the country. But there's no clear prospect of change to that dynamic. 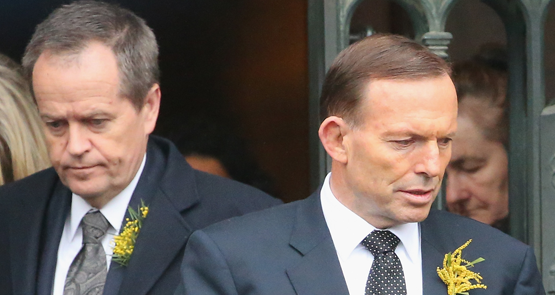 One was the moment when Prime Minister Tony Abbott reacted to a question about the twin macroeconomic threats of China and Greece by invoking his new grocery code of conduct. The other was Bill Shorten being quizzed on the minutiae of his job — or, often, the job before that job — before he entered politics, while the Shanghai and Hong Kong stock markets fell off a cliff.

The Abbott thing was surreal, if not batshit crazy, as if David Lynch had popped in to direct a media conference. Abbott’s great problem is communication of any idea more complex than “no” or “stop”, and his reply suggested either that his communication strategy now consists simply of uttering whatever his key talking point is regardless of the question in the vague hope that he’ll get his point across or, more worryingly, somewhere in his head he actually believes a grocery code (ostensibly aimed at reining in Coles and Woolworths, but sufficiently unthreatening that Woolies was happy to host its launch) is some sort of shield against major economic events offshore.

The latter isn’t so implausible given that, together with Barnaby Joyce’s agriculture white paper aimed at preserving Australia’s farming sector as it were 1975, the code represents the only economic policy announced by the government in recent times.

Bill Shorten of course is the victim of an indecently costly and politically motivated smear campaign dressed up as a royal commission. The exercise has struggled to lay a glove on anyone, mostly due to the dearth of actual wrongdoing uncovered, but partly due to the poor preparation of counsel assisting — on display again this week when it came to Shorten’s undeclared political donation.

But in a way the grilling of Shorten is entirely fair. Bill Shorten’s career has been about propelling himself onwards and upwards to his goal of leading the Labor Party, even before he carefully demonstrated his media training with statesmanlike hand gestures before the cameras at Beaconsfield in 2006. The commission hearing was in a way a long review of Shorten’s performance as “future prime minister” rather than about what specific wrongdoing he is supposed to have done –which, apparently, was to be less militant and more business-friendly than the CFMEU. Certainly, nothing was said or done by Shorten that didn’t reaffirm that he’s still a few parliamentary terms away from being a compelling political leader. Julia Gillard used to drop her stultifying mask of prime ministerial calm when she was under attack. If angered, a more lethal, altogether more compelling and effective Gillard would emerge. There was nothing like that from Shorten, who seems to calibrate his performance as if constantly glancing at a nearby sheet of paper marked “what does a leader look like”.

While that interrogation “unfolded” to the breathless tweeting of much of the press gallery, Shanghai’s sharemarket collapsed, forcing the Chinese government to suspend trading in about half the entire market. The possibility of damage to the actual economy of real Chinese people is significant, with direct flow-on effects for our economy, beyond the fact that iron ore had blown all its recent gains and dipped below the budget forecast of $48 a tonne.

Chinese stocks, and the iron ore price, might recover quickly, and the actual economic damage might be limited. Some market volatility might make for white knuckles among policymakers but leave the real world intact. But what if major problems emerge in the Chinese economy? Here’s the rub — does anyone have genuine confidence that either Tony Abbott or Bill Shorten has the leadership capacity to handle a genuine economic challenge?

And even without a sudden jolt from overseas, Australia’s economic challenges continue to mount in the absence of any apparent capacity for genuine reform from the government because Abbott is so terrified of upsetting his backbench or key friends like the Murdochs. Abbott’s idea of big-picture reform at the moment consists of handouts to farmers via cheap loans and a few dams and an innocuous and unnecessary guideline for supermarkets that dare to try to offer consumers lower prices.

With Abbott and Shorten nearly as unpopular as each other, there’s a dynamic of disillusion working through federal politics, a sense that neither man is up to the job, or if they are, of not actually communicating how they intend to go about it. There’s no clear way forward from this. Labor lacks a means to remove Shorten even if they thought it might be worth the risk of reviving the memories of the Rudd-Gillard years, and Abbott is willing to do virtually anything — or more correctly, do virtually nothing — to stay in power. Malcolm Turnbull has been incessantly performing his Dance of Seven Veils of Product Differentiation, but the prime ministership still won’t fall into his lap with cross-party room support (try Shenhua, Malcolm — you might win the Nats back with that quick smart).

If the polls stay locked at 52-48, with the occasional leap for 53-47, so the country will remain locked, Labor unwilling to think seriously about its leadership, Abbott insisting he can recover to win an election. waiting for something, or someone, to come along. Perhaps it’s not Lynch but Samuel Beckett in charge, as we perform our very own Aussie version of Waiting for Godot.

Labor post-rudd are behaving like someone who’s gone through a bad breakup, and then decided to “settle” for the very next one who came along..

Shorten epitomizes playing it safe at the moment – he is so risk averse in every way that even mavis at heavenly meadows retirement would be a more compelling leader.

The meek might not yet have inherited the earth, but, we’re making progress; the feeble are at least governing it this country.

They’ve grown into their mediocrity well.

The economy, well, that’s one thing, but I think the almost complete disregard of liberal democratic values in the pursuit of ‘security’ is even more worrying. Neither party has articulated a policy in relation to international relations broadly that is not just domestic politics writ a bit larger. Meanwhile, fighting continues across the Middle East, refugees from fighting or economic attack continue to seek asylum, inequality continues to increase between the have and the have nots. What is going on? How can we ever know when the government creates a flap about words on television and the opposition sits quietly for fear of being portrayed as ‘soft’ on something or other. Get. A. Grip.

A desert with no trace of a mirage in sight Bernard.

Is there no man/woman of reason and conviction on the horizon?