Media briefs: will he or won’t he? … draft terms released … Tele looks on the bright side …

Will Malcolm Turnbull turn up to Q&A? Plus other media tidbits of the day.

Will he or won’t he? As of Thursday morning, Malcolm Turnbull had yet to inform the producers at the ABC’s Q&A whether he would be abiding with the boycott of the program that forced Barnaby Joyce to pull out on Sunday night. And as the days to his scheduled appearance pass on Monday, the odds are against him showing up.

Online betting firm William Hill was on Monday betting he would, offering punters odds of $1.72 if they successfully predicted Turnbull would show up, but $2.03 for successful bets on him being a no-show. The odds have since dramatically reversed, with odds of $1.72 offered on a successful no-show bet and $2.05 for him turning up.

A William Hill spokesman told Crikey the odds on a Turnbull showing lengthened considerably after multiple large bets were placed on him adhering to the Q&A boycott. One punter put down $500 at $2.05 on a no-show, and yesterday, 75% of  bets placed were on the no-show side of the ledger.

“Betting on entertainment and politics is definitely on the rise in Australia, but when it comes to these type of markets it’s more the bet amounts and not so much the number of bets that creates the interest and eventual market shifts,” the spokesman noted. So given the market is shallow, a few big bets dropped can have a big effect.

Sportsbet has also opened up a market on the minister’s potential appearance. On Tuesday, it was far more skewed towards a no-show by Turnbull, but in the days since the market has narrowed significantly, with most punters more than happy to take up Sportsbet at those odds, suggesting it was a little too bullish on the chances of Turnbull obeying the party line. The price of Turnbull appearing has reduced from $3 to $2.75, while the odds of a non-appearance have drifted from $1.33 to $1.40.

“The punters definitely disagree with our odds on this one and seem sure Turnbull will risk the wrath of Abbott by making an appearance,” said sportsbet.com.au’s Will Byrne. — Myriam Robin

Still on Q&A …The ABC has released the terms of the review being conducted by Ray Martin and Shaun Brown.

They’ll look at the topic, panel and audience makeup of Q&A, to assess whether it’s “sufficiently  broad”, the presentation and adjudication style of presenter Tony Jones, and the choice of questions chosen. They’ll also be asked to look at audience behaviour and whether this affected the reviewer’s perceptions of impartiality. Also coming in for review is the program’s use of social media.

Not included in the terms of reference is anything about security fears, which were one of the things Malcolm Turnbull was concerned about (he says Q&A is a high-profile target, though presumably a journalist and a media executive aren’t the best people to assess security).

Martin and Brown will prepare a draft review of the first 23 episodes of the year, which will then be sent to the head of television and shown, under confidentiality clauses, to any staff mentioned in the review (presumably Jones and Q&A executive producer Peter McEvoy). The reviewing team will then have “the option of revising their final report in light of any issues raised”. The report will then be submitted to the ABC board and released with a response from the ABC at a later date. — Myriam Robin

Front page of the day. The Daily Tele was never one to let a crushing defeat at the State of Origin dampen its spirits … 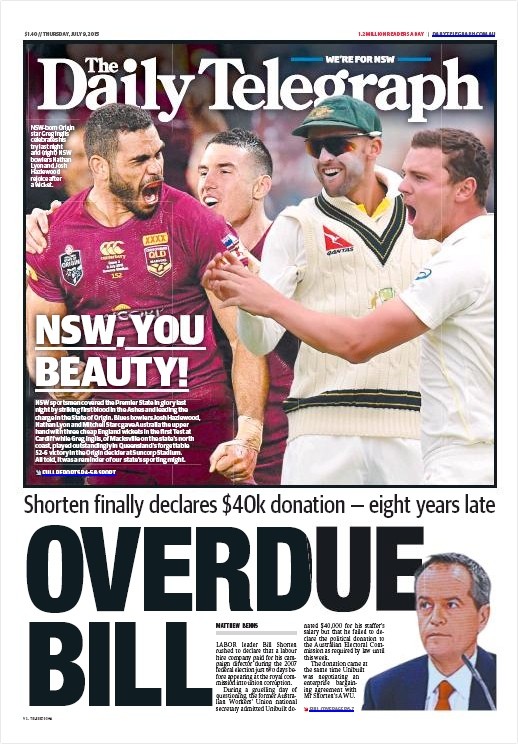 Turnbull won’t appear. His presence on the Q&A panel would precipitate too many questions about defying his PM, splits in the Cabinet etc.

Not to mention that his appearance would prompt LNP colleagues to dislike Turnbull even more than they do now.

Zut – I agree, Bullturn’s non appearance will be nothing to do with principle, pure political pusillanimity.