Five things everyone misunderstands about the Greek debt crisis 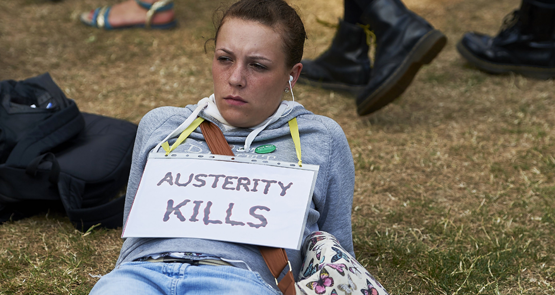 The fallout of the Greek “oxi” referendum has caused commentators, analysts and politicians to warn of the dangers of accruing a “Greek-style level of debt”. Social Services Minister Scott Morrison took to the airwaves to warn that, for all the human tragedy associated with the Greek economic collapse, they “had their warning back in the ‘80s and chose to do nothing about it”, suggesting Greece’s bankrupt pensioners and 40% of children who are living in poverty are “reaping what they sowed”.

But plenty of steps led Greece to where it is today, and plenty of steps could have avoided it. If politicians are really concerned about avoiding a Greek tragedy, they should look at the facts:

1. Greece is, and has long been, a low-tax country.

Indeed, in the last 50 years, Greece’s tax/GDP ratio has only once been higher than the OECD average.

The deficit hawk is not a species unique to Australia. The universal prescription to every economic problem, “cut taxes and restore business competitiveness”, was loudly apparent in the early days of the collapse.

Soon after the global financial crisis, Greece cut its corporate tax rate from an already low rate of 25% to 20%. The tax cut was justified at the time by Greece’s conservative prime minister, who suggested the cut would provide “a strong incentive for investments and competitiveness”.

Unfortunately, the cut helped neither the Greek economy nor its budget. Tax revenue plummeted, and the economy contracted by 17%. It did help the foreign shareholders of companies operating in Greece though.

3. Greece is not a big spender on social welfare.

Greece’s irresponsible, fiscal freewheeling image is widely accepted, but the characterisation is a sloppy one. In reality, Greece’s public spending on social welfare has been about average for the OECD for the last 30 years. (Well, a little bit lower than the OECD average, but let’s not split hairs.)

In fact, as a share of GDP, Greece spent less on social welfare than Germany every year between 1985 and 2010.

Nonetheless, Germany continues to run surpluses, so much so that it’s becoming a problem. Germany can do that, unlike Greece, because it’s collecting plenty of revenue. 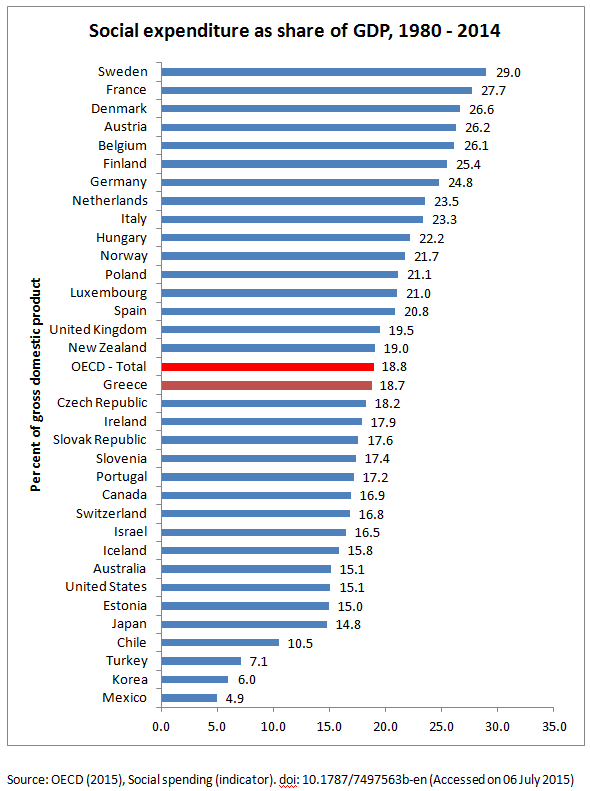 4. When Greece started dramatically cutting government spending, it made things much, much worse.

One of the key conditions to bailout talks was that the Greek government implement the IMF-designed set of cuts to spending and increases in tax. When Greece adopted the austerity solution, the effect was disastrous.

A 2013 review by the IMF’s chief economist found that, for every dollar of public spending the Greek government cut, Greece’s economic output actually contracted by $1.50. The organisation has since acknowledged it “significantly underestimated” the impacts of austerity and recognised it made many “notable failures”.

Greeks do tax avoidance like they do weddings: bigger than anyone.

The best way to reduce the Greek deficit would be to increase tax collections, particularly by closing tax loopholes and ensuring better compliance. Unlike cutting welfare and spending on health, such an approach would impact on the country’s high-income earners who can most afford to hide their cash, rather than the most vulnerable members of the community.

If Greece simply reduced the tax system’s loopholes, its fabled “spending problem” disappears. As the graph below shows, if Greece did no more than limit its tax loopholes to the OECD average, its budget would have been in surplus for 11 of the last 12 years. 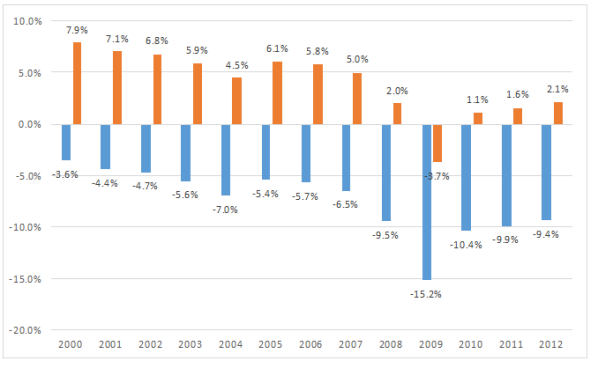 Critics of Greece typically attack it for spending “too much” on welfare, but they are strangely silent about the shortage of revenue.

In a speech to London’s Institute of Economic Affairs in 2012, the then-shadow treasurer Joe Hockey cited the example of Greece as he declared that the “age of unlimited and unfunded entitlement to government services and income support is over”.

Greece indeed offers plenty of advice for Australia, but the Treasurer and his allies aren’t seeing it. Which is strange, because the advice is plain as day:

If Australia’s politicians actually want to learn anything from Greece, they must look beyond ideology towards reality. Greece had a long-term revenue problem. Successive governments were too afraid of losing the votes of their core constituents to do anything about it. And that’s the real lesson for Australia.

Very useful information. The moralistic nonsense about the Greeks has been and continues to be sickening.

Keith1: it’s hard to avoid moral conclusions – implicit or explicit – about a country so completely dedicated to tax evasion. It is the Greeks’ cynical behaviour now (Merkel as Hitler, threatening to ‘flood’ Europe with migrants, complaining about not being excused for choosing not to pay debts, while private capital outflows are massive as these good citizens stash their debt relief offshore, etc.) that really galls those who are familiar with their clientilist government structure. The authors of this piece are flat out wrong in asserting that Greece’s critics are “are strangely silent about the shortage of revenue.” On the contrary, the tax evasion is front and centre in most analyses I’ve read.

Gee, “Successive governments were too afraid of losing the votes of their core constituents to do anything about it.” sounds familiar, where have I encountered that sort of pusillanimous politics…?

Agree with Decorum. No one is hiding from the rampant Greek tax dodging – it’s the national sport.

And anyway, I get peeved by the constant suggestion in many articles (either explicit or implied) – this inclduded – that everyone else is to blame for the Greek’s financial mess but them.

This is an interesting read