Apple leaves musicians up shit stream without a paddle

Will Apple Music be a game-changer for recording artists? Perhaps, but not in a good way, writes freelance journalist Gram Morris. 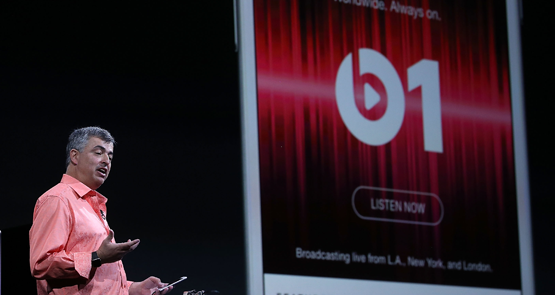 The launch of Apple music last week reignited one of the most reliable conversation-starters of our time: is streaming bad for artists? Because, if my newsfeed is anything to go by, it seems that while most of us are just fine with the fact that our iPhones are being put together by exploited workers in Asia, we start to get shirty when we hear Taylor Swift isn’t being paid properly.

Last month, Swift publicly criticised Apple for its decision not to pay artists during Apple Music’s initial three-month free trial period. Within hours, the company reconsidered its position, and both sides came out looking like winners. Swift was painted as a champion for musicians while Apple was seen as a company willing to take artists’ rights seriously.

Billed as “the only battle on planet Earth in which in which she might have been the underdog” the headline was that Taylor Swift had taken on Apple and won. Except not really. Because even after Apple reconsidered its plan, the company was still offering more or less the same shitty deal that Swift had very publicly turned her nose up at just six months ago. When Swift’s 1989 album was released last year, her label not only refused to make the album available on Spotify but also removed her entire catalogue from the service.

Swift’s abrupt change of tune left some wondering whether the entire dispute with Apple was an elaborate charade and the two sides had been working together all along. Alternatively, it might just be that Swift is ready to acknowledge you can’t fight city hall forever. Despite impressive first-week sales for 1989, Swift fans did not behave as planned by rushing out and buying the album after it was removed from Spotify last year. Instead, they just decided to stream it on YouTube (which pays artists even less than Spotify does) or download it on Pirate Bay, where the album was also No. 1.

Like it or hate it (and a lot of people hate it), digital revenue has become increasingly important for the music industry. According to a survey conducted by Merlin, a global digital rights agency, the industry has reached a tipping point, with more than half of its members stating that income from digital services was now their main source of business revenue.

Almost 15 years since iTunes was launched in 2001 the money has moved from owning to listening, buying to streaming. Like Spotify, Apple music doesn’t sell music; it sells access to it. Instead of buying albums, users pay $11.99 a month for access to an “all you can eat”, premium music service.

There are some who believe streaming will restore at least part of the revenue that has been lost to piracy. After Spotify was introduced in Sweden in 2008, the record industry’s total revenues grew by more than a third between 2008 and 2011 while piracy plummeted. As one Stockholm music executive enthusiastically told The New Yorker “we were an inch away from being buried, and Spotify single-handedly turned that around”.

Others, particularly the artists themselves, are less impressed. In a Wall Street Journal editorial last year, Swift argued that streaming was no better for artists than piracy. Ironically, Swift was one of the few artists making any real money from Spotify (about US$500,000 a month before it was pulled). Those who have yet to see any meaningful income from streaming services are mid-level, mid-career musicians, for whom Spotify has further eroded their CD and download sales without coming close to making the difference in streaming revenues.

Dan Luscombe from Australian band The Drones has yet to see any meaningful income from digital streaming services. He says he has concerns about the new system but feels that rallying against it too hard would be pointless: “I’m 40 this year, so I have to be careful I don’t veer into ‘old man yells at cloud’ territory. But I have serious concerns about the sustainability of an artist’s career these days.”

“One of the pros that always comes up [with digital music] is anything that gets music out into the world and heard has to be a good thing. People who might not have got attention under the old model now have an opportunity to get heard.”

The problem, according to Luscombe, is not the technology but what it has done to our attention span. “There’s a huge bloom in emerging artists now. New artists are popping up everywhere, but when discovering new music becomes the fascination then it doesn’t leave much left over for the mid- or later career artist. When you look at your Madonnas and others who had really long careers, they benefited from having a focused audience [because] they weren’t dealing with the constant new thing every two weeks. Millions of people have records now, and they are all vying for the public’s attention.”

Luscombe is also unconvinced that touring is a sustainable alternative. “Part of the argument for [digital music] is that touring should sustain you. But I wouldn’t endorse touring for the rest of your life as a way to make a living. It can be a stress on the brain, maintaining relationships is hard, keeping family units together becomes hard. After a while you reach a point where you wish there was another way to make money that didn’t involve constantly getting in a van.”

Another problem is that the system for calculating digital royalties is enormously complex and artists basically have to trust that labels will treat them fairly. When Tame Impala frontman Kevin Parker participated in a Reddit AMA recently he claimed: “Up until recently, from all of Tame Impala’s record sales outside of Australia I have received zero dollars. Someone high up spent the money before it got to me.”

Establishing who owes what to whom is difficult, and the complex formulas involved often go over the artist’s head entirely.

When I asked Luscombe what he thinks about Apple taking a 30% cut of the revenue from Apple Music, he said: “To me, when you think that all they are doing is handling data it seems a bit mean spirited. It seems an unfair amount of profit to me.”

“There’s an attitude of ‘Why should we feel sorry for musicians who do what they love? That should be their reward.’ I do love it and I’m fortunate that I’ve gotten away with it for so long, but it’s still work.”

Did Swift sign with Apple bc they are paying higher royalties to rights holders (70% – i believe this is higher than spotify) or is really the ‘same shitty deal’? I read this interesting statistic on Music Business Worldwide:

if it converts 13% of its paying customers: “that equates to $1.3bn a month – or $15.6bn a year… more than the entire annual recorded music industry’s revenue as we stand.”

Doubling the music industries income seems to be leaving it an a pretty good state. Seems like the issue, as you mention, really falls on the labels fairly compensating their artists and sharing this 15-30bn more evenly.

The last two overly verbose articles have been utter filler – is the Curse of HelRazer overwhelming Crikey?
We pay for this thing, give us something worth reading.