Feel the breeze. Just when we thought games of political brinksmanship couldn’t make us feel any more uncomfortable — after the PM was threatened with sexual assault by Senator Glenn Lazarus yesterday — the Australian Sex Party’s Fiona Patten has stepped things up a level. This morning it was reported that planning laws would be changing in Victoria to make Campbells Cove, one of the state’s four nudist beaches, no longer a place where clothing is optional. The reason, according to Planning Minister Richard Wynne, is increasing development and more families living in Werribee, south-west of Melbourne’s CBD. Patten hit back by calling the government wowsers, and made this offer: “I invite Minister Wynne to accompany me to picturesque Campbell’s Cove or Sunnyside North on the Mornington Peninsula or to the gorgeous Point Impossible or Southside in Torquay to experience the freedom and enjoyment of nude bathing. Clearly he needs a day to clear out the cobwebs and get back to nature at its purest.” Wynne said this morning that he had never been skinny dipping before and declined Patten’s offer. His cobwebs are staying put, and here’s hoping Lazarus leaves Abbott’s alone as well.

Every sip you take, we’ll be watching. This morning, Bill Shorten finally got the chance to give testimony at the Trade Union Royal Commission, and although he said beforehand that he “relished” the opportunity, it’s hard to find anything to relish in the testimony so far this morning, which focused on who was paying members of Shorten’s campaign team in 2007. The appearance has blanket media coverage, which, as the questioning got into specifics about the number of “U”s and “I”s in Unibilt (as compared to Unibuilt), has been a little dry. The dryness was picked up by the Oz, which tweeted (and soon deleted) an update on Shorten’s hydration:

While the royal commission is all about getting into the minute detail, the water intake of a man being questioned for more than an hour at a time probably isn’t the biggest news angle.

Just between you and me. While some parts of the government are hoping that the debate around section 18c of the Racial Discrimination Act would stay in the background, there are others who aren’t keeping quiet on that front. In Liberal Senator Sean Edwards’ most recent newsletter, the South Australian wrote hundreds of words on 18c and the Liberal Federal Council decision. It’s all beneath this fetching photo of Edwards with Prime Minister Tony Abbott (perhaps taken at Abbott’s most recent photo call?). 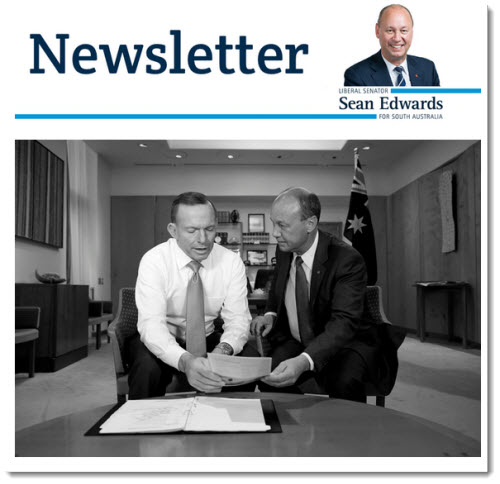 Edwards launches into the debate by linking section 18c to the fight against “the cultural cavemen of the global islamist movement”:

“If we consider what most fundamentally distinguishes Western Civilisation from the cultural cavemen of the global islamist movement, it’s the free and forceful exchange of ideas and the way those ideas influence the evolution of our society. The recent Federal Council raised once again the issue of Section 18c of the Racial Discrimination Act and its impact on reasonable debate in Australia.”

Edwards also used the debate over recognising Aboriginal Australians in the constitution as a reason that 18c needs to go:

“The Government plans to specifically recognise Aboriginal and Torres Straight Islanders in the Constitution but discussion of who is and is not an Aboriginal person for the purpose of this amendment may well fall foul of the law. So Section 18c may literally prevent Australians from commenting freely on changes to their own Constitution.”

Trawling for trouble. In correspondence from pollies, one Reddit user emailed Senator Claire Moore about the controversial Copyright Amendment (Online Infringement) Bill, and received a reply that didn’t quite answer the question:

“Thank you for contacting me regarding super trawlers. This issue has raised concerns for many people. I have spoken with our Shadow Minister Mark Butler about the issue, who has has provided the following information on Labor’s position and commitment to our marine enviromnent.”

A lesson in the pitfalls of computer shortcuts: copy-paste with care, people.

Russian selfie guide. The Russian government has decided that its citizens are putting themselves in danger by taking too many selfies and released this guide to ensure that Russian selfies are safe selfies. The common subheading on each segment is, in fact, just a phonetic translation of the English “selfie” into Russian (spoken with a Russian accent, of course). So now Ms. Tips can’t help but picture Ernst Stavro Blofeld, stroking his cat, and saying: “Selfies are a dangerous game, Mr. Bond.” We’ll leave you to guess what the rest of it means: 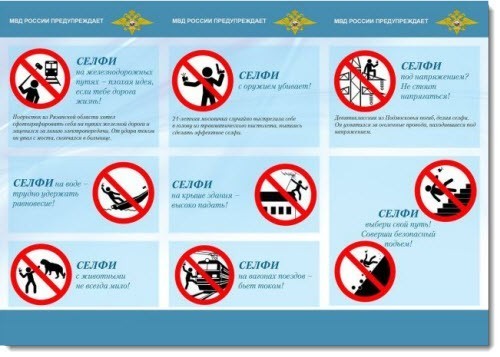 Thank you, no, thank you. Fergus Hume’s classic 19th-century Melbourne crime thriller The Mystery of a Hansom Cab centres on the ghostly passage of a hansom cab through the darkened streets. The audience at the launch of Blockbuster!, Lucy Sussex’s new book on how Hume’s mystery became a global publishing phenomenon, might have felt the same way. At the end of a well-received Q and A about the book, Sussex began her thank-yous, which ran and ran and ran, through her editors publishers, colleagues, librarians, friends, family, academics and producers of a TV show she liked, for doing another season. As the laughter went from appreciative to nervous, Sussex thanked the Abu Sayyaf terrorist organisation for not bombing the plane she was on coming back from Asia. And with that, we streamed out into the dark Melbourne night …

As I recall, Lucy Sussex thanked the Abu Sayyaf for not bombing a restaurant she dined at on the night she dined there. They did so another night. There is a 20 minute interview with Ms Sussex on this week’s edition of Arts Alive.

“Why did you order that – they couldn’t be ‘all they had’? You know Wasabi subs give me heart-burn!”

Every sip you take, we’ll be watching. That just about sums up the professionalism of NewsCrap numpties, churnalist, stenographers, muppets and sock puppets.

Why Crikey concentrates on this sort of trivia instead of, for example, breaking questions about serious money issues at a NSW Central Coast Local Government body isn’t easy to justify.
If small newspapers without the big pockets needed for lawyers can run important breaking news, shouldn’t Crikey be able to at least dip their toe into the story?