The Opposition Leader looked for all the world like he loves spending his days answering questions at the union royal commission. 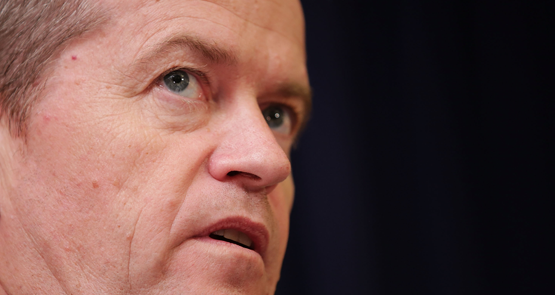 It was a very low-key morning at the Trade Union Royal Commission this morning. Although we were expecting counsel assisting Jeremy Stoljar SC to lead off on large payments made to the Australian Workers’ Union by construction giants, in fact we started on a relatively minor matter. Stoljar has been questioning Opposition Leader Bill Shorten about an arrangement in 2007 by which labour hire company Unibilt paid the $50,000 salary of Shorten’s campaign director, Young Labor member Lance Wilson.

Shorten was examined on the wording of the contract, which stated that Wilson was a “research officer” for Unibilt rather than describing his real role, which was to get Shorten into federal Parliament.  The former union leader admitted that he knew about the arrangement, but vehemently denied that he had received a personal advantage from it. He won the safe Labor seat of Maribyrnong in the Kevin ’07 election and is now involved in this royal commission because he was national secretary of the AWU from 2001 until 2007.

Although the subject matter is relatively minor, the presence of Shorten at the royal commission, widely regarded as an $80 million witch-hunt against the union movement and the ALP, means that there is a packed house. The media room and the public gallery are both overflowing, and the footpath outside is thronged with cameramen. Shorten looked calm and cheerful when he arrived this morning, presenting a smiling face to the public. Apart from a couple of snappy moments, he’s also looking fairly relaxed in the witness box, cracking a few jokes with the commissioner and even chuckling away at a few private witticisms.

Shorten told the commission that Wilson was employed by Unibilt and donated his services to work on the Labor campaign. Asked by counsel assisting how he had managed to attract this donation, he said he had asked Unibilt boss Ted Lockyer for it.

“I find, in my experience, in terms of donations, either you have to ask or someone has to offer; and that is what happened here,” Shorten said.

Counsel assisting put it to Shorten that he should not have been discussing a political donation with Unibilt at the same time as the company was negotiating enterprise bargaining agreements with the AWU. Shorten said it was incorrect to describe this as “untoward”. At some point, Unibilt stopped paying Wilson’s wages and the AWU took over the payment, but Shorten said he wasn’t sure when this occurred.

Later, he was asked about the issue of companies paying the union dues of members, rather than the members paying it themselves, which is the usual practice.  Shorten said this was not a problem, that people would “walk and chew gum at the same time”. In other words, the union was able to look after the interests of its workers and receive political donations from companies without it being a conflict of interest.

Later on the commission is expected to question Shorten about various payments made to the AWU by builders Winslow and Thiess John Holland, cleaning firm Cleanevent and others. They are trying to find out whether the employees knew that the companies were paying money to the AWU and whether these funds were used to increase the influence of the AWU within the ALP.

Employers on construction projects often preferred to deal with AWU as they were seen to be more reasonable than the other relevant union, the CMFEU, which has a long and colourful history.

We are two hours in and the Opposition Leader is still managing to look as though he is happy to be here. Last night, Shorten’s office released a statement saying that he “relish[ed] the opportunity to talk about what I believe to be every Australian’s right — a good, safe job with proper pay and conditions”.

It would be a delicious irony if Shorten’s appearance at the Royal Commission improves his standing with the Australian public. Justice indeed!

Graeski, the word you need isn’t irony it’s miracle. Even Sgt Schultz’s “I know nothing” was far more convincing than Bill’s theatrics.

He may be pronounced, if not found, clean but it’s that very “cleanliness” that bothers me.
I don’t a union leader, and certainly not the peak leader of an amalgam, say something like the ACTU, purely as an example, to be so well regarded by the captains of industry.
Does not compute, shurely shome cog-diz there?

These union foibles involve pitiably small amounts of money and were good for business generally. Who would want to deal with hard nuts like the CMFEU?
The criminality of our finance industry and the damage done to small investors has been massive, yet no Royal Commission. I think this interlude may strengthen Shortens position.

Ken I have few doubts that Margot, should she decide to spell out the scandalous details about this and other abuses of Union rank and file members’ Union Contributions, could convince you that it was an abuse, sometimes legally sometimes not, of Union Powerbrokers’ positions.
The more that comes out the less it will as you hope, “strengthen Shortens position.”