Harper Lee's new novel is about to be published, as the literary world holds its breath. Plus other media tidbits of the day.

Literary world holds its breath. Fairfax’s metropolitan “compacts” will publish the first chapter of Harper Lee’s eagerly awaited Go Set A Watchman on July 10. The first chapter will be released online simultaneously through a variety of global publishers, such as The Wall Street Journal and The Guardian, ahead of the July 14 launch.

The novel, Lee’s second after To Kill A Mockingbird, has been tightly held by publisher Random House. Bookseller+Publisher reports Random House “hasn’t sent any proofs to reviewers, and has asked that international publishers interested in purchasing the rights fly to London to read the manuscript at the office of literary agent Andrew Nurnberg.” Review copies won’t be available until after the book launches. Go Set A Watchman, which is a sequel to Mockingbird, is already at the top of the various bestseller lists entirely due to pre-sales. — Myriam Robin

Inside the cult of Vice. In recent years, former street mag Vice News has exploded onto the news scene in a big way. But it’s done this while trying to convince readers and viewers its ethos hasn’t changed. Through numerous interviews with company reps and anonymous insiders, the Columbia Journalism Review takes a deep look into the “cult of Vice”:

“For a 2011 Vice documentary, [Vice founder] Shane Smith travels to Libya, meeting the rebels who were then fighting former leader Muammar Gaddafi’s forces, and arrives in the port city of Misrata, more than 12 miles from the frontline. Towards the end of the documentary, creative editing makes it appear that Smith is in a car traveling to what he describes as the frontline although, according to a source with direct knowledge of the production, Smith did not make the trip. According to the source, a sole cameraman went to meet the frontline fighters, even as Smith describes in a voiceover how “we finally got to the front” and “while we were there they got word that a major offensive was about to start.”

“It comes down to the edit and the edit at Vice is always about entertainment,” said the source. “There’s no mystery about it: [Shane Smith] is not a journalist, he’s a showman.” Vice did not respond to multiple requests for comment. In another instance, a former female editorial employee spoke of covering a story involving sex workers in a developing country where she was sent to a strip club. She was also asked to go undercover as a prostitute, which she refused to do.

“They wanted to sensationalize and exploit these sex workers in a way that I just couldn’t engage in,” she said. On another shoot, she said, a producer told her to swear more on camera… That is the irony, and the tension, of Vice. To sustain its appearance of being the genuine article — among employees, viewers, investors, and the media — it needs to be both rebellious and dependable, to have the credibility of The New York Times with the posture of a drinking buddy. Vice must balance these often contradictory qualities as the company strides toward its future as a bona fide media giant. ”

Vogue-ing. Looks like Julie Bishop’s had some (digital) work done … 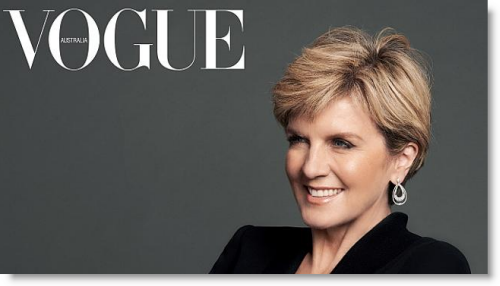 Front page of the day. The Advertiser links a sporting celebration with a sporting scandal, as our Aussie cricket team goes back to where they came from. 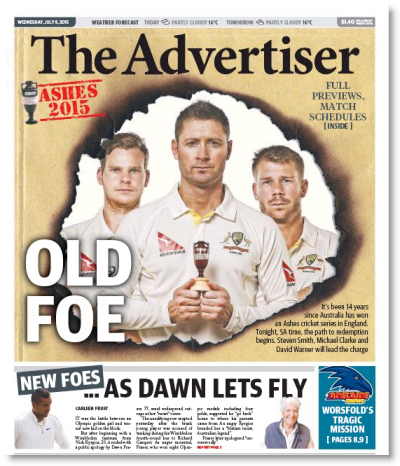 You’d think Vogue would have pictures less than a decade old?