Isentia Index: ‘Isn’t this the Asian Century?’ And other concerns

Barnaby Joyce dominates media coverage, but not in the way he'd hoped.

Agriculture Minister Barnaby Joyce has catapulted into the top five thanks to his Agricultural Competitiveness White Paper was released on Saturday; his cancelled appearance on ABC’s Q&A following Prime Minister Tony Abbott’s boycott of the show and comments against same-sex marriage, with Employment Minister Eric Abetz joining him in his concern about how our Asian neighbours will perceive us if such legislation passed. Leichhardt MP Warren Entsch and Brisbane MP Teresa Gambaro are in sixth and seventh place respectively as rumours of their cross-party bill leak, supported by independent MPs Cathy McGowan and Andrew Wilkie.

Criticism about the ABC program Q&A continues from the PM and federal government, with industry veteran Ray Martin appointed as head of an independent audit, only to be asked to step down after he labelled the federal government’s program boycott as ‘silly’. Foreign Affairs Minister Julie Bishop and Immigration Minister Peter Dutton have taken a tumble in the rankings as issues of national security and asylum seekers ebb from focus, and Social Services Minister Scott Morrison holds his seat warm for a second week in ninth place, commenting on everything from Greece to Q&A to his own portfolio, calling on the private sector to invest more in welfare. 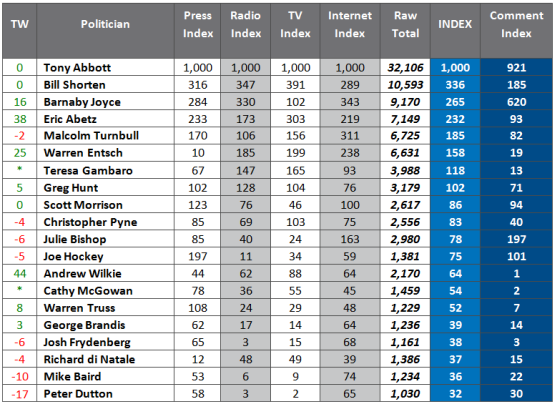 Opposition Leader Bill Shorten is knocked out of his usual second place spot and drops to fifth, omitted from discussions surrounding same-sex marriage, the budget and climate change.

Barnaby Joyce was mentioned alongside foreign ownership and the white paper, his Q&A boycott, and comments that same-sex marriage would make Australia appear too decadent for Asia.

Former Olympian Dawn Fraser got into trouble for comments about tennis player Nick Kyrgios. Yet another chapter in the life of highs and lows.