Do Australians really love women's sport? The viewership numbers do not bear this out. 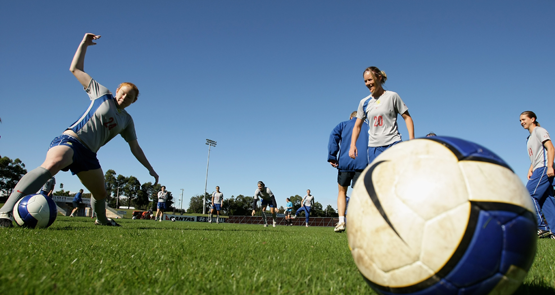 More than half of Australians say women’s sport is just as exciting as men’s, according to Essential polling released yesterday, and an overwhelming majority think that sportswomen make great role models for girls.

Some 350,000 people woke up early to watch the last Matildas game during the 2015 Women’s World Cup, as compared to 2.2 million who watched the first Socceroos match last year. Both matches took place out of prime time, with the Matildas taking to the field at 6am AEST, and the Socceroos at 8am AEST.

The United States had much better viewership numbers for the World Cup-winning game against Japan, with 25.4 million Americans tuning in to watch, more than any other soccer match in history. However, their winning team’s $2 million bonus is $33 million less than the $35 million bonus awarded to the winning team of the male competition. The remuneration of Australia’s competitors also featured heavily in the local news cycle over the tournament, with 72% of people polled believing that sportswomen were underpaid compared to their male counterparts and that the financial rewards were inadequate. The top players in Australian women’s cricket can earn up to $85,000 a year after a pay rise earlier this year, and Cricket Australia says it is working towards paying the players a professional living from the sport.

Sixty-eight per cent of respondents told Essential they thought that the media didn’t pay enough attention to women’s sport (and the Socceroos got five times as many media mentions as the Matildas during their respective World Cups). In Australia, women’s sport makes up just 7% of programming, and 8.7% of sports news bulletins, with horse racing receiving more coverage than women’s sport. The ABC no longer broadcasts the W-League (soccer) or the WNBL (basketball) after budget cuts last year.

Some 27% of respondents thought that most women weren’t interested in playing or watching sport, though 90% of women disagreed with the statement.

Eighty-four per cent of those polled thought that women athletes were “great role models” for girls, with just 7% thinking that they weren’t.

While Australians say they find women’s sport just as exciting as men’s, they don’t have many opportunities to watch it. Even though prime-time TV viewers have the option of four different sports tonight — the rugby league final, the Wimbledon men’s quarter final, the Ashes and the Tour de France — none of them feature female athletes.

Whoever would have thought people don’t always respond honestly to pollsters? Unless of course they’d read this same story in previous Crikey editions.

I’m not sure that’s a judgement that can be made across the board.

For example, I found the women’s soccer to be at least as interesting as men’s soccer (they seem to pass and shoot more), but I find women’s tennis to be generally boring compared to the men.

“Wimbledon men’s quarter final”. Well duh. They alternate men and women at this stage in proceedings. In general though most people want to see the best at a particular sport and again, in most cases, that’s the men. Sure women’s sport can be exciting though. One of the great sporting memories for me is the 400m at Sydney OG.