Across a number of key economic areas, the government appears unable or unwilling to undertake reform, even when there is strong agreement it is needed. 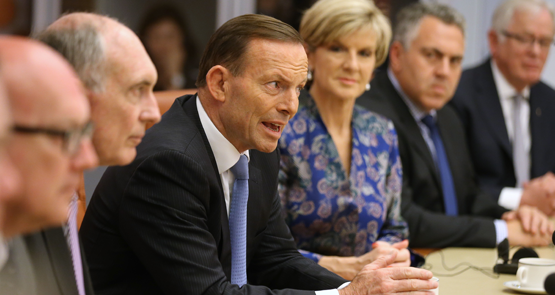 A couple of months short of two years into its first term, the Abbott government should be hitting its stride. No more ministers on training wheels, the inevitable post-election period of “hitting the ground reviewing” done with, a government comfortable in its own skin starting to tackle key issues and embark on significant reforms for an economy facing genuine issues around its budget, infrastructure, financial system, future growth drivers and climate policy.

Instead, economic policy has ground to a halt. Across nine key areas of policy, the Abbott government is frozen, apparently incapable of any significant movement because of Tony Abbott’s weak political position or the Liberals’ inability to convincingly articulate the case for reform.

Joe Hockey deserves credit for persevering with the idea of a new financial industry inquiry in opposition and into government. But he’s now had David Murray’s unexpectedly rigorous report for eight months, and the post-report consultation process has been over for three months. During that time, the already serious problems of the financial services industry have grown significantly worse as a succession of scandals has roiled major institutions, consumers have lost confidence and all three major regulators have attacked the culture of the industry — an issue that Murray also highlighted. The government’s only priority, however, has been the prosecution of an ideological war against industry super funds rather than taking on some of its biggest donors, the major banks. Hockey’s overdue response to the report is now a key moment for a troubled but critically important sector.

There’s virtually universal agreement among markets, international institutions and all but a few fiscal hairshirt commentators: Australia’s public finances are strong, but we have a medium-term fiscal problem and need to establish a plausible path back to surplus, especially in the face of an ageing population. The government would argue that it has been stymied by the Senate in its savings plans, but remember it gave up around $12 billion over four years in tax revenue by dumping Labor’s carbon price, mining tax and super tax rises, as well as rejecting other super tax reforms (and genuine multinational tax reform despite a succession of revelations about the contempt with which large overseas companies treat Australian tax authorities). Instead, the government will rely heavily on bracket creep and very optimistic growth forecasts to begin slowly bringing the deficit down, and now prefers to ignore what it used to hype as the “budget emergency”. Since being elected, the Abbott government has increased Australia’s borrowings from $273 billion to $373 billion.

Malcolm Turnbull had undertaken the policy work to progress a reform almost universally recognised as required in the increasingly beleaguered television broadcasting industry — dumping the analog-era 75% reach rule so that regional and metropolitan broadcasters can consolidate. Except, Tony Abbott is terrified of upsetting either Kerry Stokes or the Murdochs, so the proposal is dead in the water — even as regional TV broadcasters cut staff and local services to regional communities.

The much-vaunted review of competition policy by Professor Ian Harper was submitted to the government more than three months ago. Despite a speech to the Committee for Economic Development of Australia last week having been suggested as a possible venue for the government’s response, Small Business Minister Bruce Billson only used it to explain how complex and lengthy the government’s response to Harper would be, with Billson repeatedly noting the need to closely consult and work with the states and territories. The review was first announced in December 2013; whether there is any substantial response two years later remains to be seen but looks decreasingly likely.

Another area of policy near-unanimity, the need to rein in tax concessions for superannuation, was the subject of calls for bipartisanship from the government itself earlier in the year and, and for Treasury to actually undertake work to develop reform options. That was rapidly abandoned by Abbott once he decided to take advantage of Labor’s decision to respond with its own policy. And bear in mind that Hockey had, within months of becoming Treasurer, done away with previous Labor super tax reforms in this space — in effect taking us backward on the issue. Now, the government has been locked by Abbott into a no-change stance on super tax, and it seems retirement incomes more generally, for the rest of its life.

Despite a white paper, tax reform is dead, buried and cremated, with the government ruling out any GST changes at the outset — exactly as Labor did — to forestall a rerun of Chris Bowen’s successful scare campaign during the election campaign. The federation reform white paper, which is supposed to accompany the tax reform process, has yet to even emerge, after a discussion paper blew up in the government’s face after Labor leaked it. Having invited Labor to engage in a bipartisan and constructive debate on tax reform last year, Abbott has instead used any Labor suggestions — including possible consideration of a long-overdue switch of negative gearing to new housing — as political weapons. Which leads to the government’s problems on …

Having rejected targeting negative gearing at new housing stock, the government’s only policy on housing affordability involves demonising foreign real estate buyers (leading to racist abuse at property auctions). What little demand this removes from the property market in Sydney and Melbourne is likely to be offset by investment in new housing stock (where most foreign investment is directed) being deterred by Australia’s hostility to investment in this sector, particularly from China.

The government actually likes to boast of its achievement in taking climate change policy backwards — abandoning an effective, low-cost carbon-pricing scheme, reducing the (less effective, but in the absence of a carbon price, necessary) Renewable Energy Target to stop wind farms. But climate change and its challenges for Australia can’t be wished away. Currently the government, along with Labor, has committed to a 5% reduction in emissions (as measured at 2000) by 2020 and the government is relying heavily on the way Australia’s emissions are internationally accounted for to achieve it, not its woefully underfunded “Direct Action” policy. The Climate Change Authority has recommended, ahead of the forthcoming international conference in Paris, that international action and the need for more substantial action to arrest global warming means we need to be aiming for 30% cuts by 2025. Anything significantly short of this will perpetuate Australia’s growing isolation on climate change.

The most puzzling of all: despite — again — unanimity, including from the IMF and the Reserve Bank, that a “pipeline” of sensible infrastructure spending would be economically beneficial, and Tony Abbott explicitly and repeatedly anointing himself the “infrastructure Prime Minister”, infrastructure spending has stalled badly and the notionally independent body established by the previous government to oversee it, Infrastructure Australia, has only recently emerged from 18 months in limbo. Worse, the government’s infrastructure priorities are decidedly old-fashioned — the increasingly problematic NBN is being switched to a mix of 19th- and 20th-century technologies, and the most recent announcement of major infrastructure is for new dams, almost half of which will be in northern Australia, far away from existing areas of economic activity.

What’s striking about this list, even ignoring infrastructure, is that so many items are not major political challenges. The argument that the electorate will no longer accept reform might be relevant on, for example, GST changes, given the likelihood of a Labor campaign against them. And negative gearing changes, even ones that don’t affect existing investors, leave the government open to another scare campaign. But across climate policy, superannuation and financial services and media policy, the government is resisting widespread support — often consensus — because of perceptions of potential risk, the attitude of one or two key stakeholders, or because Abbott is so desperate for political leverage he’s prepared to use Labor’s vestigial willingness to offer serious policy against it. The government has extended standard pre-election tactics — remove or “debarnacle” policy loose ends, shut down risky policy moves and sharpen its differentiation points from its opponents — barely 18 months into its term.

The question thus becomes, how long can the Australian economy afford a roadblock as prime minister?

Windsor and Oakeshott ride again to force parties on climate

Unloved by investors and coal addicts, AGL shrinks into our energy policy vacuum

The delusional dreams of the “business community”, typified by Tony Shepherd’s Commission of Audit, lie in tatters. If they want anything done at all, they are going to have to talk to Labor, barring some miraculous but unsustainable Turnbull ascension.

But persuading News Corp of that is going to be a hard ask. You can expect News Corp’s mad ravings to sabotage any and all sensible policy discussion in the nation for years to come. A case in point: News Corp was key in scaring Hockey away from super reform.

Have royal commissions and coast to victory.

If it wasn’t for Labor’s ineptitude (running dead with a monkey like Shorten in the saddle) this mob would have lost more bark than a Basenji.

As for “performance” – what do you expect when you catch a r’Abbott in the head-lights.
Any wonder he doesn’t want himself and any member of his “Water-Closet Downs” mob caught out in the open of Q&A – and wants it gutted, on any pretext?
Uncle Rupert doesn’t treat him like they do – he’s happy in ignorance.

If we are to assume that “good government’ started as stated after the Near Death early this year then this must be the best we can expect.
Hmmm..