Hackers hacked. One of the more odious “cyber-security” companies in the world, Hacking Team, is in the news for all the wrong reasons. The Italy-based company is notorious for selling spyware products to some of the world’s worst regimes, although it has long insisted it only sells to NATO-approved governments. In 2012, Reporters Without Borders deemed it an official Enemy Of The Internet. In a hack reminiscent of the famous HBGary Federal Anonymous effort of 2011 — which revealed a trove of secrets about US cyber-defence companies and a plan to destroy WikiLeaks — Hacking Team has been broken into and hacked, with 400 GBs (yes, GBs) of files put online by an unidentified source in a humongous cache that will take months to process. Already, many of the regimes that the company sells products to — for example, spyware designed to enable regimes to track down dissidents or take control of their PCs — have been listed. And on the list, as reported by iTnews is our very own Australian Federal Police, which secretly spent over $360,000 in 2011 to buy the company’s spyware and malware. As the HBGary hack showed, the documents are likely to be the kind of gift that keeps on giving, for those with the bandwidth and storage space to go through them.

No sausage fest (or funds) here. Sometimes we wonder if maybe it’s time to leave the Labor Herald alone, but then stuff like this happens. The Pozible campaign to raise funds to pay for contributors and marketing is going along at a healthy pace, with almost $13,000 raised of $30,000 total at the nine-day mark. When the campaign opened, we commented that one of the rewards for more pricey donations was a red tie — which doesn’t seem like much encouragement for women who may want to cough up $150. We’re not the only ones, with this comment left on the page over the weekend: 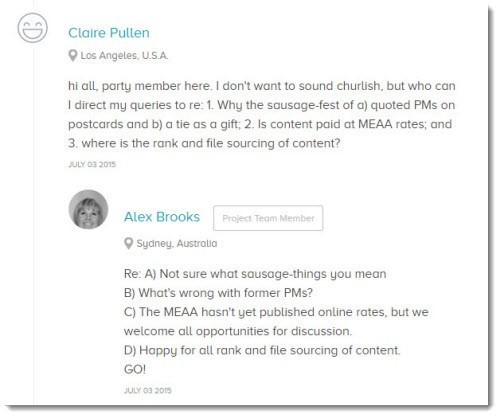 Editor Alex Brooks has been politely replying to almost every comment, but in this one she avoids answering the question by claiming ignorance as to what a sausage fest is. We think it might be a good word for a Labor backer to learn (to describe the current government, for example). Labor supporters also received an email this morning asking for support for the campaign, saying “The Labor Herald wants to be as great as it possibly can to make sure we win the ultimate prize — a change of government.” It also says that the $30,000 won’t be going too far to fund paying its writers: “The Herald operates on a shoestring and will rely on volunteers to publish content — but your pledge will help us carve a strong voice to stand out in the noisy mainstream media.”

Exclusive Watch at the Oz. It’s been quite a while since our last round of Exclusive Watch, but switched-on readers of Tips and Rumours would have been confused this morning when they spied a big red “Exclusive” tag on this story on page 3 of The Australian. “Joint Strike Fighter loses dogfight with aged jet” is the headline from defence editor Brendan Nicholson, on a piece that refers to a post on the War Is Boring blog, in which a test pilot admits that the F-35 Joint Strike Fighter couldn’t outmaneuver an F-16, which was designed 40 years ago. We reported this on Wednesday last week and the blog has been up for a week now. Glad to see nothing has changed at the Oz.

New career time. This advertisement was spied at a women’s gym in Melbourne. Is ASIO looking for more fit women to tackle the StairMaster of terrorism? 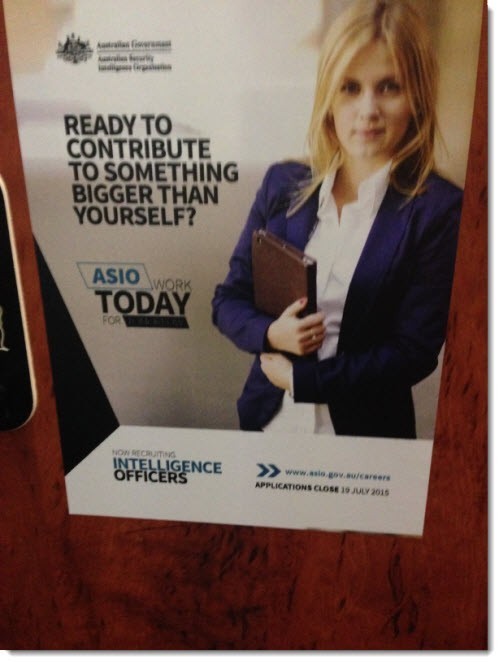 Typo watch. It seems that the worth of a good subeditor is often underestimated. A local man has alerted the Melbourne City Council to a typo he found on a street sign. 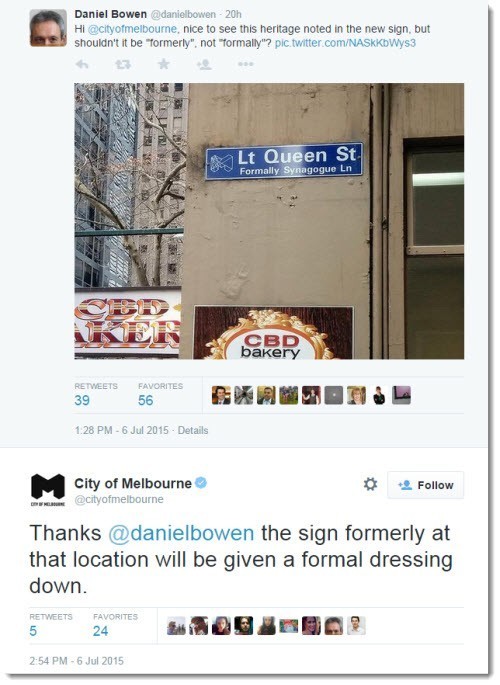 Of course, it’s possible “Lt Queen St” is a nickname, but we doubt it. Though it’s good to see the council’s social media reps have a sense of humour.

Reading the help ads. In what has the potential to be a blow to The Australian and The Australian Financial Review, Australian Public Service Commissioner John Lloyd has said that senior executive service appointments no longer have to be advertised outside of the APS Gazette. It doesn’t mean that advertisements for senior mandarins will disappear from the papers straight away, but some departments will reconsider if they are getting value for their advertising dollar. It’s part of a move to reduce red tape in recruitment, with other changes allowing more vacancies to be limited to current public service employees. The Mandarin is reporting these are just the first tranche of changes to reduce red tape.