It was a soft, though interesting, opening for the ABC's new documentary series on Gina Rinehart and her family history. 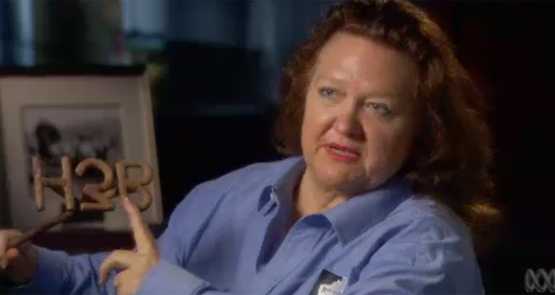 Lang Hancock loved exploring for iron in his plane so much that he sometimes lost track of the time. He’d circle over his home while his daughter, Gina, and wife, Hope, lit kerosene cans left prepared along their Pilbara runway so he could land in the darkness.

It’s anecdotes like this that provided the new ground in last night’s Australian Story, which benefited from Gina Rinehart’s co-operation and from recently released archival footage of a young Gina, but failed to uncover much that was new about the heiress (who denies she is an heiress).

Rinehart has lived her life in the spotlight. She’s been the subject of books, a telemovie and countless profiles and commentary pieces. But these have very rarely been written with her co-operation. Her Australian Story interview was billed as her first extensive interview in 10 years (she spoke to Channel Ten in 2012, and in print she spoke to Women’s Day in 2013 and to The Australian this time last year — nonetheless, an extended interview of this sort on film is rare).

The ABC has understandably sought to milk it for all its worth, telling the story of Rinehart’s life over two episodes. The first dealt with Rinehart’s family history, her father’s establishment, and her childhood and youth, leading up to the birth of her oldest children and divorce from her first husband. The second will deal with the rest of the story — including the controversial bits, such as her father’s relationship with Rose Porteous, her many legal disputes, and her more recent involvement in politics.

Most of the story is told through Rinehart’s words or the words of longtime family friends, such as businessman John Singleton or Rich Lister Imelda Roche. Some of the more critical interpretations of Rinehart’s early days — like the scepticism with which many have approached her father’s famous “discovery flight”, or the story that Rinehart’s first husband was ordered to change his name to Hayward (from Milton) so it sounded more like Hancock — didn’t feature in the program.

But the episode did veer a little from the Hancock mythology towards the end, when former Perth journalist Jane MacLatchy reveals how she realised Rinehart and her first husband, Greg Milton, had split after MacLatchy caught a cab driven by Milton, who went back to his original name after the divorce. When questioned, Milton denied he was Rinehart’s husband, but MacLatchy did a bit of digging and discovered the two had gotten a divorce in Sydney two months earlier. She wrote a front-page story, but she says she was surprised that it wasn’t widely picked up or followed by other outlets. “I thought there would be follow-ups, but nothing came, and I suspect that the heavy hand of Hancock came down at some height, and that was the beginning and the end of the Greg story,” she said.

The claim isn’t contested in the program by Rinehart, who isn’t shown speaking of her divorce at all. Or, indeed, directly addressing anything at all that was controversial even if it was mentioned by the program, such as her father’s more objectionable views towards Aborigines.

The episode got decent if not spectacular audiences, with 1.27 million people tuning nationally, of which 860,000 were in the major cities.

Doco was still pretty interesting, and I didn’t think showed her as the most empathetic of humans. Loved the bit where she was asked in her early days about how much of a role her hubby should be taking in the company, and her fairly direct and firm reply stopped just short of saying “none”.
I had thought that MacLatchy was rung up out of the blue by Greg, but can’t be sure now.

The archival footage was the drawcard, a novelty to see the early years.

It’s unlikely Oz Story could edit the interviews to improve the public’s general impression of Rinehart. No-one could write a screenplay to equal the Hancock saga.

Didn’t watch the program, and have NO interest in that awful woman.
Masterchef was much nicer!!

Myriam – I have have seen a different show. What I saw was silly and inane. I have to ask how it came about as it is hardly of interest to most viewers.

We West Aussies remember Lang well. I can recall him saying in a radio interview that asbestos never did him any harm, suggesting that health concerns by thousands of victims were unfounded. And there was always the story about Lang and his plane and Aboriginals being sniped at from the air.
Then there was his plan to use nuclear weapons for mining, brilliant! And his friendship with that awful commie East European dictator.
Being a building worker in WA I have been told a couple of delicious stories by other tradies who worked at Gina and Langs properties.