Crikey writer-at-large Guy Rundle and Crikey intern Aron Lewin take an in-depth look at one of the most intriguing crossbenchers. 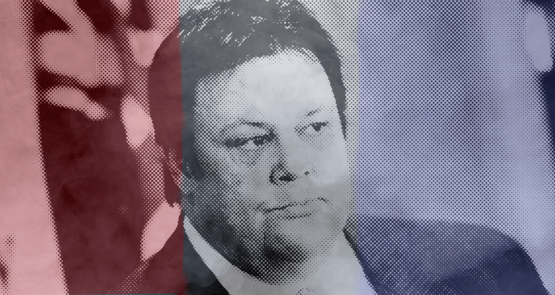 When the votes came in for the Senate in the days and weeks after the 2013 election, both the victorious Liberal-National Coalition and Labor and the Greens baulked at the result. For many it was bad enough that crafty use of above-the-line ticketing and the obscure maths of preference swaps had delivered eight crossbench senators with no major party affiliation. Worse, three of those senators were from the upstart Palmer United Party, whose wily leader quickly negotiated a deal with the Motoring Enthusiasts Party’s Ricky Muir to make it a four-senator bloc, thus controlling the balance of power of the balance of power. With the Greens under Christine Milne taking an oppositional strategy, nothing could get through without the roar of the Palmersaurus.

But that beast has now gone the way of all dinosaurs. The PUP started coming apart almost as soon as it had been formed, with tensions between Clive Palmer himself and Tasmanian Senator Jacqui Lambie flaring repeatedly, before she left the party in November of last year. Ricky Muir, who made an early independent contribution by pushing for the retention of the Renewable Energy Target — something claimed as a coup by “preference whisperer” Glenn Druery — never really caucused or worked en bloc with Palmer. Then in March of this year, Glenn Lazarus, the “leader” of PUP in the Senate, departed, leaving only Dio Wang to carry the banner.

The collapse of PUP has changed the alignment of the Senate crossbenchers. By force of argument and personality, Palmer advanced a centrist-right agenda, well towards the centre compared to the Coalition’s budget, and held off a range of education, health and welfare cuts the government was seeking — while waving through the abolition of the carbon and mining taxes. Most of the other crossbenchers have experience and a recognisable ideological background — senators Nick Xenophon and John Madigan chief among them, with Liberal-turned-Family-First Senator Bob Day bringing up the rear, and Wang still basking in the munificent guidance of the Great Helmsman Clive. Of Liberal Democrat Senator David Leyonhjelm there are two theories: one, that he knows exactly what he’s doing — building a base — and the other that he’s careening across the landscape on a political crotch-rocket.

That leaves the three very junior senators: Lambie, Muir and Lazarus, who are truly orphans in the storm as the Abbott government makes chaos and mismanagement a permanent state in Australian politics. At least one, and usually two or all three need to be rounded up to get business moved on in the Red Room. Yet they are all a work in progress, their politics a mixture of right and left, their opinions often, it seems, unknown even to themselves. Muir has quietly impressed many with his application to the job, Lambie is Lambie, and Glenn Lazarus is …

Well, Glenn Lazarus is a bit of a mystery. When he stormed out of PUP, he alleged that Palmer had been rude to his wife, Tess Sanders-Lazarus. Full of fight, Lazarus declared that he would be starting his own party, the Glenn Lazarus Team, just as Jacqui Lambie had vowed to start her own outfit. Lazarus’ move may have seemed copycat, but in fact he had more scope for success — a public hero of sorts, seen as a “decent bloke”, the “Brick With Eyes” turned his rugby league high profile into a 9.89% primary in the 2013 election, easily enough to gain a following with Palmer for a vote in 2019, if he wanted it.

Yet since then, there’s been no sign of the Glenn Lazarus Team, and not much sign of Lazarus himself. The most forceful and compelling of the juniors, Lazarus, insiders say, is feeling the pressure of the split with Palmer — especially now that Palmer is going after him. In April, Palmer declared his intention to launch a multimillion-dollar lawsuit against Lazarus. PUP national director Peter Burke released a statement on the party website saying that the lawsuit reflected the accounting cost involved in getting the Senator elected and that Lazarus “deserted the Palmer United Party, betraying all those who voted for our party and our many members who worked so hard to get their representative elected in Queensland”. The lawsuit is a Palmer special, but some say that it is getting to Lazarus.

Lazarus’ office denied that this was the case — his wife, Tess Sanders-Lazarus, in her role as his media adviser, dismissed the suggestion, saying that nothing was impacting on the senator’s performance. Sanders-Lazarus has outlined her role as limited to media work, telling Fairfax Media: “I write all his speeches and questions; I do all his media releases and social media.”

But a source who worked on his campaign goes further, saying that in fact Sanders-Lazarus is running the seat from behind the scenes because of Lazarus’ political inexperience.

That was certainly the impression gained from Lazarus’ first performance, at Palmer’s Coolum gathering for a weekend of seminars, dinosaurs and vintage cars at his quiet — very quiet — resort after the election victory. There Lazarus gave a 10-minute speech (four times over the weekend) comparing politics to sport, but he quickly became flustered by questions from the floor and had to be steered back to ground by PUP media adviser Andrew Crook (currently embroiled in a police investigation): “Arrr, Glenn, can you tell us about some of the torrid tussles you’ve had on the field and how they might influence your thinking about strategy?”

Perhaps Lazarus has gained some political smarts since, or perhaps Lazarus-Sanders is directing strategy. But she is no political A-lister either. She is director of the Invigorate PR agency, which seems to offer a wealth of political and showbiz A-list speakers on its carousel website — until you read the fine print and see that Invigorate only promises to try to arrange the speakers you request via the speakers’ own agencies. The testimonials on Invigorate are from Queensland frock shops and landscape architects.

Rounding out the office is the chief of staff, Scott Higgins, former goalkeeper for Gold Coast United, Palmer’s soccer team.

Other crossbench offices say that it is difficult to speak to Lazarus. A source close to the Greens told Crikey that the party did not work closely with Lazarus but wanted to do so in the future, and media adviser for David Leyonhjelm, Gavin Atkins, said: “We would like to work more closely with Senator Lazarus on matters of common interest.”

Yet Team Lazarus are going in one definite direction: left. Lazarus’ voting record shows that he has busted out of the PUP idea of being leftish on social issues and to the right on the environment, which might be a product of Palmer’s Catholic beliefs. In his days with Palmer, Lazarus backed the Coalition’s “Direct Action” emission reduction scheme, with the understanding that “Australian families cannot bear the responsibility” for climate change when Australia’s trading partners are not united.

Almost a year since making that statement, Lazarus’ ideology has changed. He has since consistently voted in alignment with the Greens on a heterogeneous range of issues ranging from SBS advertising flexibility and higher education regulation to calls for a referendum as a means of achieving marriage equality.

Pinned to his Twitter account is a 55,000-strong petition for a royal commission into coal seem gas mining and for a wholesale ban of fracking, stating: “CSG companies knock on the door [of Queenslanders] and through bullying, intimidation, threatening behaviour, relentless pressure and other tactics force their way onto peoples land.” He has avoided being swept up in the moral panic over the health impacts of wind farms and has remained staunchly opposed to the wind farm inquiry, which has been led by his fellow crossbenchers.

He was also the sole crossbencher to vote against the slashing of renewable energy targets. Lazarus said:

One possibility for Lazarus’ switch green is that he always was so, and was constrained by the PUP negotiations. Another, suggested by some, is that he had a desire to “stick it to Clive” after the break-up. But a third possibility is that Lazarus remains oriented to the Australia Institute, whose leaders Ben Oquist and Richard Denniss worked closely with Lazarus during the early days of the 2014 Senate, when much of Abbott’s legislative agenda was stood on its head (the Australia Institute would not offer comment to us for this piece).

That may well be the case, but it doesn’t cover all the bases, and many still find Lazarus’ political leanings unpredictable. One persistent rumour is that Team Lazarus is being besieged by the anti-vaccination movement, with Lazarus’ home turf of the Gold Coast having one of the largest proportion of anti-vaxxers in the country — approaching 10% (beaten out only by … the Sunshine Coast). Sanders-Lazarus equivocated about contact with the anti-vaxxers when we spoke to her, but she did not deny that Lazarus had met with them in his official capacity, saying that a senator has the obligation to meet all of his constituents, not just the ones he agrees with.

Which marks the current dilemma for the crossbenchers, really. To have any chance of heading off a Senate restructure that makes their continued existence impossible, they will have to show Australia that they are both open to new ideas and unchampioned causes, and rational enough to advance a consistent program. We’ll wait with interest, but with quiet scepticism to see if the Glenn Lazarus Team ever takes to the field.

Hopefully Lazarus is becoming what this country needs from its Senators – an evidence-based enquirer and advocate. Not a rubber-stamper.

Excellent article. Agree with the first comment, we do not need a chamber full of rubber stampers.

And the more independants in both chambers the better. It makes them harder for the ruling party to muster.

Agreed, and just think, if the rules were changed how the govt wants now, had it been so way back when, then their precious (supposed) Liberal Party might not have been born.

“Fanfare for the Common Man” would seem to be appropriate. As hippiedom died in the mud of Woodstock, so progressive politics lost the will to live when the wonks became MPs.
I’d rather have a mad eyed Lambie than a dead eyed Minchinite or pulseless extrusion like the tiny but imperfectly formed, Mini Mr Bean