Ray Martin invites criticism by telling everyone to calm down about Q&A. Plus other media tidbits of the day.

Have a Bex. Asked about the Q&A saga this morning on Sunrise (which he was co-hosting), journalist and Q&A reviewer Ray Martin said everyone should take a Bex and have a “good lie down”. Asked specifically about the Q&A ban (which Barnaby  Joyce cited when pulling out of his scheduled appearance late on Sunday night), Martin said he couldn’t believe it:

Martin said that given Malcolm Turnbull, who is still booked on for next week, probably wants to be Prime Minister still, he likely won’t appear on the program. “But I think it’s silly … a politician giving up access like that … it’s a great forum for people to talk.”

“I thought it was about time for a little balance. I thought the rants and raves were a little crazy about that thing so it was time to at least have a look at what it was about …

“I can’t imagine Australia without the ABC, so I’ve got a lot of time, but that doesn’t mean that it can’t be better … I can’t believe, it’s clearly a political issue at the moment in terms of terror. I think we’ve already started looking towards the next election ….

“I think everyone has agreed it was a mistake to have him [Zaky Mallah] live, there’s no question about that, but the rest I’m going to wait and see.

“I’d like to see what happened last year … when there was a Labor government. I expect Tony Jones was just as tough on the Labor government as he has been on the Coalition right now. I think a Bex and a good lie down may help at the moment.”

As has been recently pointed out by the Oz’s Strewth columnist, the inimitable James Jeffrey (all you other Strewth columnists are just imitating), Bex can kill you and was banned in 1977 after being linked to kidney disease . But we applaud the sentiment. And note Martin’s likely to get a bit of blowback for voicing it — particularly as Abbott has already said the reviews commissioned by the ABC are likely to be a “whitewash”. 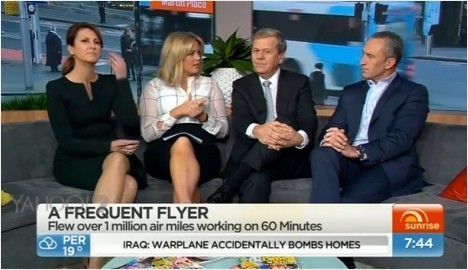 World Cup a winner. It helps having a winning team in the final, but yesterday’s World Cup final — which the US won, 5-2, over Japan — also produced not only the biggest audience for any soccer game in America, including men’s World Cups, but also one of the largest ever TV audiences for women’s sport anywhere. According to early overnight ratings 25.4 million watched the World Cup final on Fox TV (which has scored a massive goal with the finals). That was more than the size of the audiences watching Big Brother on CBS or Celebrity Family Feud on ABC.

That was after the semi-final against Germany drew more than 12 million people. Both audiences were larger than the deciding game six in this year’s Stanley Cup ice hockey finals in the US. It was also an audience larger than the first five games of this year’s NBA finals between the Golden State Warriors and the Cleveland Cavaliers. Only the audience for game six (won by the Warriors) was larger at 23.25 million people.

Nielsen data showed the game beat the 18.2 million strong audience who watched the USA v Portugal men’s game on cable channel ESPN at the 2014 World Cup in Brazil. The final audience was nearly seven times the size of the USA’s opening game against Australia, which averaged just over 3 million viewers (and was the largest every audience for an Australian women’s team event). — Glenn Dyer

Jones tumbles in Brisbane. While his audience share in Sydney grew by a healthy 2%, Alan Jones’ 4BC audience has taken a tumble, with the broadcaster’s ratings for the breakfast slot falling 1.2% to give Jones an audience share of 5.2%. It’s a fraction of the audience he can command from his Sydney stronghold, where 16% of morning listeners tune into 2GB to hear the talkback host.

After the Fairfax/Maquarie Radio merger, 4BC lost most of its local hosts, instead beaming up Ray Hadley and Alan Jones from Sydney to fill airtime — a somewhat novel approach to radio programming in Australia. The station as a whole lost 0.5% audience share in Brisbane, which isn’t great, but isn’t as bad as you might expect. It’s audience share across all timeslots fell to 4.5% from 5%. — Myriam Robin

NME goes begging. For the second time in three years, a major UK entertainment magazine is going free to try to avoid being sunk by a collapse in sales. The 63-year-old NME (formerly New Music Express) will go free from September, according to a statement in London overnight from its owner, Time Inc UK, which is attempting to breathe new life into the struggling magazine.

Front page of the day. As Greece woke up to an uncertain future, Efsyn put a startled Eurogroup president Jeroen Dijsselbloem on the front cover … 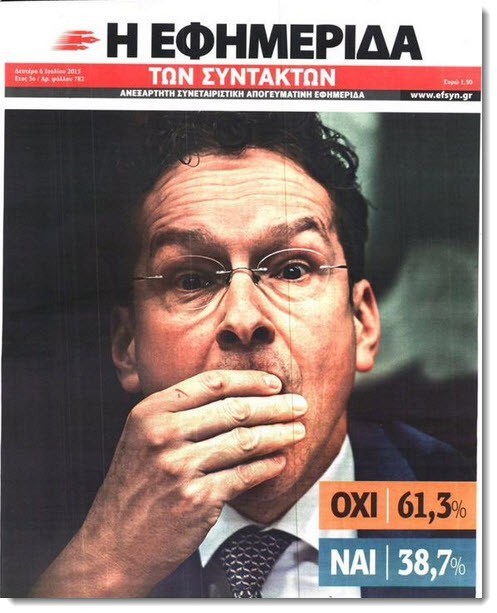 Re World Cup a winner

I am not sure what you mean by the WWC final being the ‘biggest audience for any soccer game in America’. If you mean the people actually at the game then it isn’t as the game was not in America but CANADA 😉 If however you mean the TV audience then perhaps more clarity of expression is needed.