After six years, Broadsheet getting off the streets and into the kitchen

The food-and-drink publication has opened its own pop-up restaurant in Melbourne. 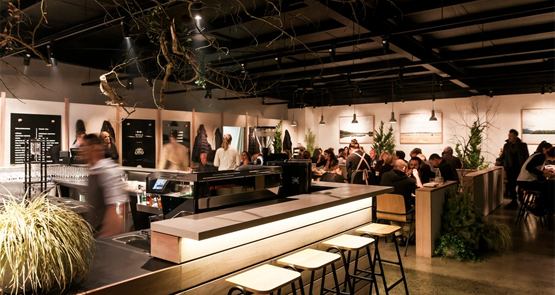 Since the start of June, Melbourne and Sydney city guide Broadsheet has taken physical form.

The Broadsheet Restaurant opened in Melbourne on June 5, to largely positive reviews. Critics mostly point out the novelty factor of a restaurant owned by a publisher, but Broadsheet founder Nick Shelton says the restaurant is not such a departure from what the publication has always tried to do.

As far as possible, Broadsheet has “curated” a dining experience, rather than creating one from scratch. The food comes from a selection of Broadsheet‘s favourite restaurants, which have given out recipes in the hopes of greater publicity. The drinks come from local cocktail bars and cafes. The decor and fittings draw on other venues Broadsheet has written about.

The restaurant, Shelton told Crikey at the Fitzroy restaurant last week, focuses on showcasing the best of Melbourne, which is what Broadsheet‘s publications try to do. And at the Melbourne Food and Wine festival in 2011, the publisher opened a pop-up cafe, which showcased a different brand of coffee every day.

Running a restaurant is expensive and a logistical challenge for the publisher’s 20-person team. Shelton says it’s unlikely Broadsheet will end up making money on the restaurant, but he hopes it will build relationships and brand recognition with both diners/readers and collaborators/advertisers.

Since being founded in Melbourne in 2009 and expanding to Sydney soon after, Broadsheet has picked up the slack on food and wine coverage that resulted from Fairfax cutting back on its specialised supplements. Its seven editors commission dozens of writers who pull in 2 million monthly readers. These are big numbers for niche publishing. Although Broadsheet covers things like fashion, retail and entertainment as well, it’s in dining that it’s made the biggest impact. “People are very interested in food and drink right now,” Shelton said. But Broadsheet covers the sector very differently from a traditional media outlet.

For one, it doesn’t do critical reviews. “If we review, it’s by omission,” Shelton said. “What’s the point of reading about something that’s not worth a visit?” Broadsheet‘s restaurant write-ups are often interview-based and illustrated with beautiful photography of a restaurant’s interiors, which Broadsheet itself commissions. While longer pieces and more experienced writers can command higher rates, Broadsheet‘s base rate is $50 a piece, usually without expenses paid. But Shelton says it’s no problem that writers have to pay their own way, as they are usually doing interviews, rather than doing a review in the traditional sense.

Many of Broadsheet’s writers are young and often leave the company after a few months or years, but the editors tend to stick around. The restaurant wouldn’t have been possible without Broadsheet‘s first editor, Caroline Clements, who now oversees special projects as publications director.

Six years on, the company is rethinking how it does things and is axing the quarterly print edition that was a key part of establishing relationships with bars and restaurants. Asked if the closure of mX and the decline of street publishing more generally has led to the closure, Shelton says he always felt Broadsheet’s print product, which featured long-form articles, was different to many of the other free print publications. He says moving away from the print edition doesn’t signal a move away from print altogether, but rather a rethink of how best to use print. The company is working on a Christmas cookbook and a long-form printed guide in partnership with BMW on the upcoming trends in food and drink.

When Broadsheet started, the quarterly print rag brought it 40,000 readers. That was a big number at the beginning, but it’s a drop in the ocean of Broadsheet‘s larger digital reach now.

It’s been a heady six years for Shelton. He started Broadsheet after working in commercial kitchens in London and New York, thinking there was space for a guide to what’s worth doing in a city while steering clear from the stale weekly review model. So far, agility and the company’s small scale have been Broadsheet‘s greatest assets. “There’s a lot of energy at our end of the media market,” Shelton said. “It changes every six months, which can be hard. But we can respond and figure out what change means for us. So far, we’ve been able to change along with it.”

New Kid on the Block: a Broadsheet approach to lifestyle online

[“What’s the point of reading about something that’s not worth a visit?” ]
Oh dear, that would mean missing out on the most enjoyable and memorable part of restaurant reviews.
The evisceration of bad food experiences by great writers.

I suppose the fact that Broadsheet pays its writers around $30 a thousand words means they can afford all sorts of good things. Scumbags

Paddy and John, I agree with both of you.
Paddy, I can recommend a very slim volume called “My Dining Hell. Twenty Ways to have a Lousy Night Out” by the Observer’s food critic Jay Rayner. It’s a collection of his worst restaurant reviews and one of the funniest books I have ever read..

Ta Margot. I think I’ve read some of his reviews. Pure gold.