Move, nourish, measure up.Fitspo brand Lorna Jane quietly removed a job advertisement from Seek this morning that asked for a “Fit model/receptionist” to work for the company, which specialises in overpriced leggings — with very specific requirements when it comes to the job-seeker’s physical measurements. The job, which seems to be for a receptionist who tries on the clothes, said applicants must adhere to strict size requirements, which were mentioned before the requirements of the role or experience needed. Interestingly, the advertisement seems to assume that applicants will be female, without any exemption from Fair Work Australia to say the company has permission to advertise what is basically an admin role to only one gender (and a specific shape therein). It looks to us like an excuse to hire a receptionist who fits a certain look — but it looks like someone within the company has thought better of it. We asked Lorna Jane why the ad had been taken down and were told by a spokesperson “The ad was removed from Seek this morning as we received a fantastic response, with a large number of applicants responding straight away to be part of our team”. The spokesperson clarified that a “fit model” doesn’t refer to a person’s fitness, but making sure the garments are “true to size”. The spokesperson said:

“As a fit model is only required in a part time capacity, Lorna Jane felt it appropriate to combine this position with the part time receptionist role which is also currently vacant. This combination will be hugely beneficial for the brand allowing the successful applicant to liaise directly with customers on a day-to-day basis, receive their feedback and allow Lorna Jane to deliver an even better product to benefit our customers and their active lifestyles. There are a number of positions within our business that combine roles to accommodate the needs and interests of our staff.”

Lunch now with less source. In a global transparency initiative coming out of New York, News Corp journalists are now required to list exactly who they are meeting in their expense reimbursement forms to management.

The new initiatives has been fiercely opposed by journalists who fear it will compromise their confidential sources, They’ve taken up their concerns to the union, which says management is well aware of the problems with the initiative but “has not offered a suitable alternative”. Crikey understands the local operation to some extent has its hands tied over the measure — it’s come down from on high as a bid to comply with US foreign bribery laws, and is partly in response to claims journalists were regularly bribing cops in the UK.

Of course, journalists could simply lie on their expense forms, but those Crikey spoke to said that wouldn’t be wise in the event the expense forms were used in court. If a journalist is asked why she had lunch with Saucy McSource, and it’s revealed she made the name up, it would cast aspersions on the reliability of the rest of her testimony.

Editors hold a great deal of sway at News Corp, and it’s hard to see any editor loving the new policy. But no solution has yet been reached.

Guess who, don’t sue. Speaking of all things News Corp, which Australian correspondent sent an email asking for, among other things, a pay rise, while accidentally copying in all staff?

Hear ye, hear ye. A tipster tells us that this flyer was sent out to residents of LNP MP Mal Brough’s electorate of Fisher recently. The locals were informed through a “national security update” that ASIO had more than 400 high-priority terrorist investigations on the go, and “our agencies” had thwarted three terrorist plots already this year. It also warns against the internet, as “the online environments has no borders. Propaganda is reaching directly into our homes and families through the internet and social media”. With subtle bold print there’s only a faint whiff of using fear to drive votes. 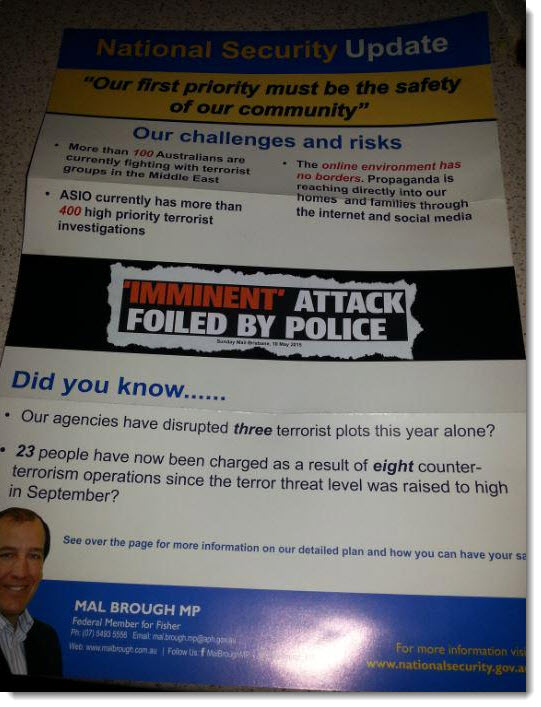 Pollie spotting. Between labelling traditional marriage “marriage integrity” and appearing on The Bolt Report yesterday, our Social Services Minister was spotted out and about in Melbourne:

“Scott Morrison spotted at Luna Park in Melbourne on Sunday afternoon. Lots of clowns at Luna Park. Wasn’t expecting to see this one there!”

Have you seen a pollie somewhere interesting? You can let us know here.

Goodbye dear iPad, we hardly knew ye. It feels like most of Instagram is filled with holiday snaps from Australians who have decided to forgo our winter and enjoy a northern summer, but it sounds like Oz scribe Darren Davidson’s photos won’t see the light of day. It’s been reported that Davidson and his iPad parted ways in Scotland after a fishing accident. Davidson hasn’t had much luck with his iPad, as it was pinched by the Daily Mail‘s Martin Clarke at last year’s Cannes Lions advertising shindig. He must have been so relieved to make it through this year’s festival with iPad intact, only to lose it weeks later.

Deadly (in more ways than one). The NT government has released its own attempt at “dumb ways to die”, but in true territory fashion, it’s not warning against the dangers of public transport, but crocodiles. The message is great, but the cartoon croc in the video seems too nice to be dangerous. 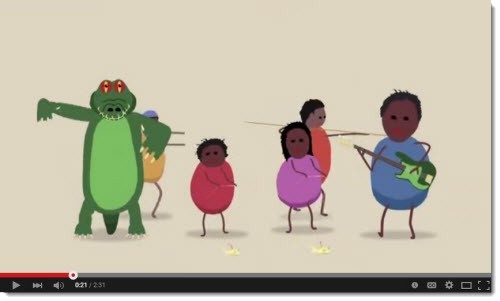 Croc wars: the case for culling

Keep all the retirees in the Sunshine Coast appropriately pacified/distracted and doubly afraid of immigration.

The message is great, but the cartoon croc in the video seems too nice to be dangerous.

During the clip the croc’ devoured three people whole and bit the heads off another three, complete with blood spurts.

I think it’s bloody brilliant and hope no nannies try to have it pulled for being too gory. Heaven knows that there are enough nitwits from the south who need educating.

Howard’s Minister for Intervention – and “big red boxes candidate” – I heard there’d been somewhere between 0 and 37,652 terrorists plots thwarted just this year – but how would we know?

I can think of one company whose clothes I won’t be buying!

I’ll never smile back at a crocodile again – scared the tripe outa me!