Mourning is a private affair, but we have turned it into a ghastly media spectacle. 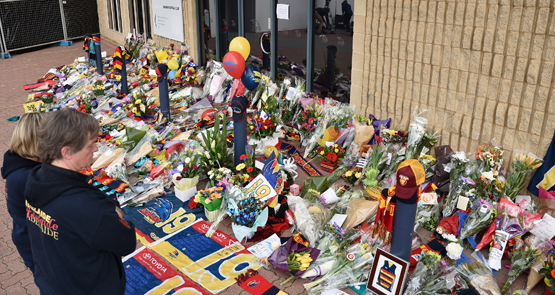 When news of the killing of Adelaide Crows coach Phil Walsh broke on Friday morning I knew we were going to be in for something special, and awful. It was all across ABC radio all morning, shunting out the last part of RN breakfast, spilling over into local radio — even for places where it wasn’t local news — and running all the way to lunch.

There wasn’t much to report, of course. There never is. Walsh had been stabbed to death, his wife had knife wounds, their 26-year-old son was in custody, and was soon moved to psychiatric assessment. Nothing else could be said. Thus the story tended to glow behind the news reports, everyone knowing what they knew, no one willing to say it.

With not much to say about the actual killing, the news switched to the performance of mourning and emotion, across all media. Flowers and tributes began being placed. Speculation began as to whether the Crows game on Sunday would continue, with a confused discussion as to whether it would be cancelled out of respect, or because the players would be too upset to play. By mid-Friday afternoon, it was clear that it would be impossible to hold the game, even if the AFL had wanted to.

The games that were held that weekend included elaborate tributes to Walsh, and bit by bit we moved to the main event, itself, one that surely marks a dividing line in Australia — thousands of fans flocking to the Crows stadium in Adelaide, for a game that would not be held. This was the handover between the two great forces in our culture: sport and safety/mental illness/risk. We’d had a prelude to it with the freak death of cricketer Phillip Hughes. That was a pretty pure event — death in cricket was a thing for decades, a byproduct of its chief thrill, the high speed of a hard ball, before helmets and better emergency medicine reduced the rate — and the ridiculous overemphasis on his death was something everyone could get a bit out of. For the sports tragics, it was a chance to stop talking about the things most Australians don’t give a damn about — politics, the world, indigenous recognition, etc, etc — and be joined in mourning. For the risk managers, the safety-first crowd, it was a chance to try and push the realm of control and prevention even further into the territory of risk, rotten bad luck and irreducible tragedy.

The sports tragics are largely the mainstream. The risk managers are largely the “elites”, drawn from the culture-knowledge-policy class. Hughes’ death marked a point at which their two discourses began to come together. Phil Walsh’s death marks the point at which they have become one. Mark the time when thousands of Australians turned up to a football stadium where nothing was happening except mourning, where the vast curved space that marked the field became a core of nothingness to worship at.

Two things need to be sorted out with this. Had the game been abandoned out of respect to the coach, it would have been ridiculous — how on Earth is abandoning a game a fitting tribute to a man who ate, breathed and slept the game itself and his team’s successes within it? — but if it is also based on the idea that the players would be too upset to play, it is pathetic beyond measure. The cancellation of the game takes a private tragedy and turns it into a public event. The discussion of the players’ “upsetness” turns it into an event of public emotionality — no coincidence that the splay of flowers outside the stadium resembles the Diana carpet of flowers outside Kensington Palace in 1997.

This is exactly the point at which people — officials, coaches, players, news editors, etc, etc — take the decision to go the other way, to talk back to the public need to attach itself to a family tragedy and leach meaning out of it. It is exactly the point at which we need to affirm a public-private split, a resilience of institutions and self. Such qualities are the essential pre-condition of a robust public sphere, an engaged politics and a sceptical and self-reliant attitude to the state and large corporate power. They thus lie at the root of both left and right politics, and people from both sides should be affirming them.

Yet instead of that, the public mourning over Phil Walsh’s death comes at the end of a fortnight in which the government has done everything it could to undermine any sense of resilience or basic public order. The right knew it couldn’t make much of Zaky Mallah’s actual comments on Q&A, so in order to embarrass the ABC and open a new front to avoid any discussion of wider economic issues, they turned it into a public safety issue, with that alleged liberal Malcolm Turnbull leading the charge, alleging that Mallah, an ex-jihadi might as well be an underpants bomber, ready to take Ultimo out with some arse-gelignite. Quite possibly there will be a large-scale terror incident on Australian soil in the years to come; most likely there will be two or three stupid failed operations picked up easily. The unlikelihood is a measure of public resilience — the principal fact about terrorism is how little there is of it, given how many grievances there are — and the possibility of it is the reason for encouraging self-resilience.

That Crows supporters would want to make some sort of tribute to Walsh is understandable; the obvious tribute in a resilient culture would be to play the game and hammer the opposing team into the turf, and then have some sort of ceremony/service. The preference for mourning over sport is a measure of how changed this culture is, from the resilient culture we imagine ourselves, and the past strengths (which often included brutalities) that we now draw on as cultural memory. True, public mood pushes this, but this is only because every time such events occur, media controllers, in both private and public media, ramp up the public mourning just a little bit more, in order to push ratings and sales. This has become a vicious circle. Just about the most sinister and demented event in the Hughes death was the photo of Queensland special forces — suited up in their Robocop uniforms, marking them out as a paramilitary force disciplining the public rather than a police force among them — wielding a cricket bat in memorial. State repression, sport and public mourning as a media event: what you have when society has been so worn away that collective feeling must be mediated through these events, or pseudo-events.

But who, with any sort of standing, is going to start to speak against these things? Both right and left have had their traditions of resilience to draw on, the latter from notions of collective sacrifice, the former from notions of collective tradition, as Newbolt’s great poem reveals (in which some imperial war is figured as the continuation of sport at Eton). But the right has so winnowed away this tradition in favour of fear, and whole sections of the left — especially the so-called cultural left — have become so focused on victimhood and damage as to be unable to speak of a whole subject, one who might one day participate in taking power. The libertarians should be saying something, but they want to pretend that a robust people is being oppressed by a nanny state. The more complex fact — that the nanny state desperately plays catch-up with incessant demands for safety, risk minimisation and public emotionality — undermines their simple mythology of power.

The fact is we are in this predicament is the hard thing to challenge, because we have got into it by stages. But the responsibility lies with those who have some power to talk back to it — news editors who make the decision to run such events as a continuous deathwatch, to make no distinction between public and private events, politicians who join their political project to such an event, officials who lack the courage to talk back to the tide swell of opinion. Coming out of our two-decade boom, with not much to show for it, and into a far more interesting future, we are going to need all the resilience we once called on as our second nature, and which we once located as being at the heart of sport. Now at the heart of things is the empty stadium, the hashtag and the silence rather than the roar of the crowd.

It was perplexing why the game was cancelled. Coaches instil toughness & focus into their players – here was an instance when emotional strength & resilience to proceed with the game would’ve earned universal respect & been an appropriate salute to honour their deceased leader.

Had the Crows lost to Geelong, despite not earning premiership ladder points, they would’ve emerged as the popular winners & a credit to Walsh. They were denied the opportunity to showcase precisely the qualities Walsh held dear.

NEVER shut up Guy Rundle- your ability to write discerningly about the complex tangle of responses engineered for us to feel, is welcome.
I am sick of this engineered grief and reaction to private tragedies made public. If this was my tragedy the last response I would want is the world claiming ownership. Have we no pity? Can we not express support and grief quietly and approriately and then leave the suffering to the comfort of those closest to them without the world media market muscling in for their take.
I am also deeply suspicious of the selectivity of those glorified in grief- there is no pity for asylum seekers, aboriginal kids in prison or any of the people for whom we have some responsibility for their non-care and neglect.
Time for cultural reflection – who the bloody hell are we? real people or manufactured likenesses of some media gurus desire.

The public & media latching onto private grief is one thing. Lumping the crows players and administration and supporters into it is another. The AFL made the right decision in cancelling that game. Who are we from the outside making judgement over whether players should be more resilient and just play? My first thought was that they should go ahead in his honour. In hindsight though, I think we owe some sympathy to all those directly involved and butt out of their decision making.

But the fans didnt decide. They didn’t meet and petition the AFL to cancel the game. Maybe the players decided, i dunno, but the admin and meeja certainly did. Im arguing that we dont need to see that as a passive process which cuts with the grain of the existing culture. We can talk back to it and point out the absurdity of commemorating an ‘all-in’ coach by – ?- not playing his team’s next game.

Guy, would you have expected the Sheffield Shield game that Philip Hughes died in to continue? If not, why should the Crows game have gone ahead?