Media briefs: <em>Hun</em> draws a blank … count on Piers … don’t you forget about me …

The Herald Sun skating close to the sub judice line. Plus other media tidbits of the day.

Hun blanks itself out — but not totally. Those who try to read the Herald Sun today though subscription newspaper-display portal PressReader are greeted with this image on four of its pages, including the front … 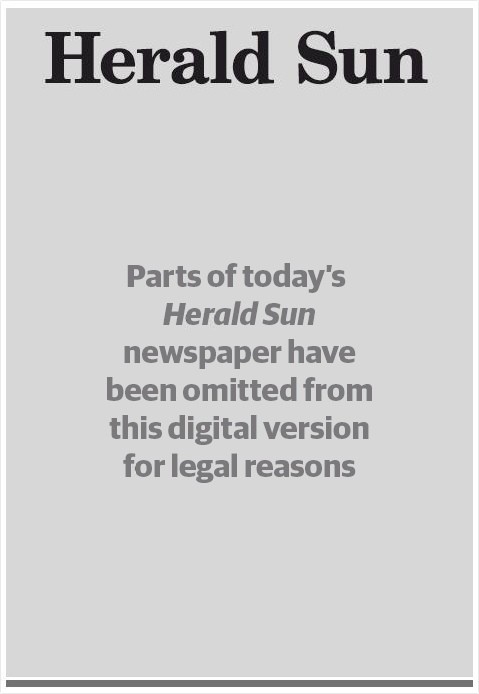 The omitted pages deal with Phil Walsh’s death, and focus particularly on his son, Cy Walsh, who has been charged with murder. The legal case is in South Australia, so papers there and digital publishers Australia-wide are subject to sub judice rules around speculating on the accused’s background or motives (hence we at Crikey are not saying what exactly has been published in Victoria).

But whatever advice the Herald Sun got about its pages, which Crikey has viewed in print form, hasn’t been uniformly applied this morning. A column by Andrew Bolt, blanked out in the digital newspaper, can be read through his blog, while some of the news articles blanked out in the Herald Sun can be read in other News Corp tabloids through PressReader (but don’t appear to be available as standalone online articles). — Myriam Robin

Empty chairs. The ABC has said it won’t bother trying to replace Barnaby Joyce on tonight’s episode of Q&A, after the government Minister — who was expected to be the first to appear since the Zaky Mallah controversy began — pulled out last night.

In a startlingly candid statement, Joyce’s adviser had said the Minister pulled out after the Prime Minister’s office instituted a boycott on frontbenchers. An ABC spokesman said this morning that while the ABC hasn’t been contacted about the boycott, he understands the boycott will stay in place until the editorial review, commissioned last week, is completed. Previous reviews have taken up to three months to conclude.

“Joyce’s withdrawal has given the program little time to work on a replacement and the boycott has made the task of finding a senior government figure impossible,” a spokesman said. “The ABC is disappointed that Joyce’s absence will prevent Australian citizens from asking the Minister questions about the newly released agriculture white paper.”

“At this stage, the plan is to continue as before, inviting ministers to appear on the program to explain their policies and views. The ABC notes that the boycott does not apply, at this stage, to government backbenchers.”

Communications Minister Malcolm Turnbull is due to appear on the program next week — his spokesman told media the minister hadn’t made a decision on whether to appear.

Last Monday, Q&A’s producers were left scrambling when two guests pulled out of appearing on Q&A at the last minute. Parliamentary secretary to the Prime Minister Alan Tudge and the Menzies Research Centre’s Nick Cater waited until Monday morning to announce their boycotts. — Myriam Robin

Q&A follies. You asked for it … no, you didn’t … nobody did, but still it goes on. Nothing other than a commitment to completism compels your correspondent to return to this bizarre morass.

With two polls showing that Labor’s lead has widened — to 53-47 two-party preferred — over the period of Q&A-gate, Mr Tony has decided to dectuple? douzedouble? down on the issue, banning frontbenchers from appearing on the program.

The move is a) sheer surliness, b) an attempt to wedge Turnbull, who is meant to be appearing next week, and has not yet confirmed that he is pulling out, c) a way of saving Barnaby Joyce from being grilled on his assertion that Asian countries will find us “decadent” if we say yes to same-sex marriage, of which more in a moment.

The media pages of the Oz were the usual groupthink, though it is unclear whose side Errol Simper is on: 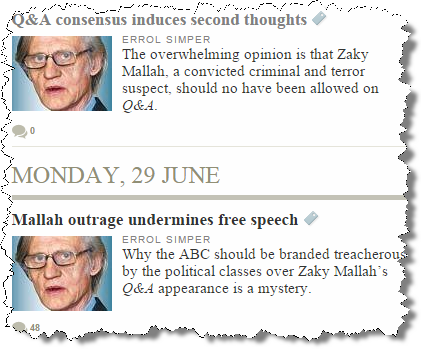 Also featured is David Flint — the chair of the Australian Broadcasting Authority, whose relationship with Alan Jones had him pinged by Media Watch — now advising on … hahaha, reform.

The problem for the anti-ABC jihadis is that not only does the ABC have double the trust rating of the current Prime Minister, it has a higher favourable v unfavourable rating among Liberals.

What is really needed now is a big pro-ABC rally held in one of the liberalish (so-called doctors’ wives) seats, where attacks on the ABC, plus a couple of other things, could change votes — either pushing votes to the ALP, or in a couple of places, bypassing them directly for a Prahran-style victory for the Greens.

Now that would be something for the Oz to squawk about. — Guy Rundle

Loving this same-sex marriage thing, loving it. Meanwhile, that Barnaby Joyce remark is interesting, not merely because it figures same-sex marriage as “decadent”, i.e. degenerate, but because it appears to suggest we should steer the processes of a Western liberal democracy in line with the opinions of our major trading partners such as China, Indonesia or … Saudi Arabia, maybe. But isn’t that relativism? Isn’t that multiculturalism? What a nightmare. Better keep Barnaby off all media for a … oh. — Guy Rundle

Piers’ maths mix-up. Unscrambling and debunking the scattershot daily rants of News Corp columnists is a Sisyphean task. Piers Akerman, for example, has written himself into such a hysterical corner in recent years that his unceasing attacks on the ABC, Fairfax and the Greens have become a formless white noise of negativism. Whatever faint filaments of logic Akerman’s paragraphs might occasionally carry are smothered under waves of sneering rhetoric.

When he runs out of declamatory puff Piers just quotes other people — at length — to make up his required word count. But the real danger arises when he tries to squeeze in a fact. Here’s Akerman in yesterday’s Sunday Telegraph, in his tirade against marriage equality:

“Australia is a substantial nation with a population of 8.4 million …”

Somehow the sage of Holt Street has managed to overlook 15 million of his fellow citizens. Oh well, close enough for News Corp. In fact, the population of Australia reached 8.4 million way back in 1952 — roughly the same time as Akerman’s capacity for rational thought apparently evaporated. — David Salter

Video of the day. Hats off to the ABC for this excellent mash-up of The Breakfast Club and The Killing Season … 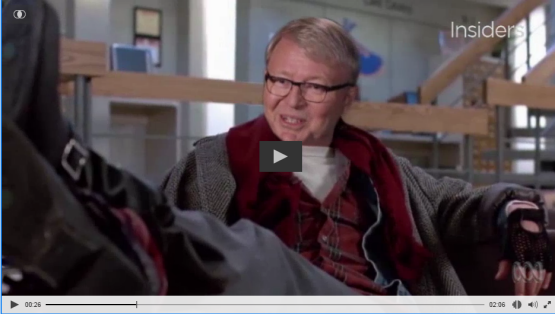 Can’t wait to see the same Insiders staffers have a similar dig at the Limited News Party?
“The Godfather” – I, II or III it doesn’t matter? After the 4 Corners report (which probably took months to do – with politicians co-operation) a week after Ciobo’s rant…..?

I won’t even read a free Terrorgraph at Maccas anymore, so I have been spared Akerman’s witless rants, and his total absence for many years on Insiders has spared me having to gag at his repulsive form as well – the joy..!!

leon – why not try Murdoch’s, for constipation?

Akerman was obviously referring to 8.4 million LNP voters, the other millions don’t count.

Akermanics :- “Those other 15 million aren’t conservatives? They don’t count.”?