Grexit, staged by the left: why Greece voted ‘no’

Greece votes "Oxi" to a bailout. So where to now? Freelance journalist based in Athens Karl Mathiesen reports. 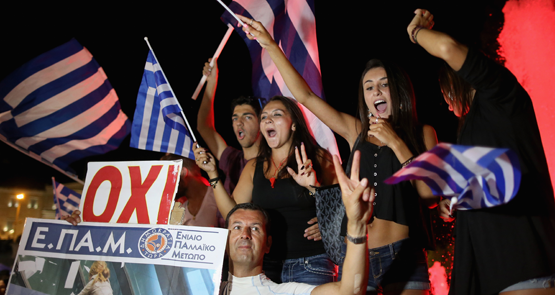 The party in Syntagma Square will go late tonight as Greeks, who have had so little to celebrate, throng their Parliament to dance and yell into the European night.

Will Sunday’s massive victory for rejecting the bailout offer be the moment when the wave of European austerity finally broke and began to roll back, or will it be another victory in Greece’s ancient Pyrrhic tradition? Anyone who claims to know what will happen tomorrow and in the weeks to come is either a liar or a politician — probably both. But tonight, Greeks were clear on one thing: the country is willing to call the troika’s bluff and see this thing through to one of many possible ends, all likely to be bitter.

A cab driver, who picked me up just as the first tranche of counted votes showed a crunching lead for “no”, summed it up: “Oxi, nai, [no, yes] same,” he said, before touching the ends of his thumb and forefinger together and shoving a finger through the hole.

Despite a sense that it may dissipate in the hot Monday dawn, the joy in the air is something of a relief. Athens has been bubbling all week, and a “yes” vote felt like it could have turned nasty. On Sunday afternoon, in a stuffy downtown cafe, two screaming men were dragged out by a waiter and forced to leave. In their Exarcheia enclave, anarchists have torched a couple of cars. And in the bourgie inner-city suburb of Kolonaki on Friday, a man in black clothes and a motorcycle helmet stood in the street screaming at a man on a balcony above.

“I’m going to come back and slit you. Fuck your neighbourhood. Everyone is getting hurt, even the innocent. Fuck your Europe.”

But apart from isolated incidents, Athens has remained pretty noble in the face of heavy propaganda, a media frenzy and the maddening indignities of capital control.

Sophia Drossopoulou, a computing professor from Imperial College London who had flown in to cast her vote (for yes) for just the fourth time since leaving Greece in 1974, said: “I admire the Greek people, who have gone through a very tough five and a half years, and a week of absolute uncertainty, and still have behaved in an orderly manner.”

Unfortunately, despite the 61%-39% landslide, uncertainty remains. ATMs started running dry within hours of the poll result being finalised, choking off even the meagre 60 euro allowance that has kept the coffee flowing this week. There’s little chance the banks will open at all in the next week. That’s a whole country, with no access to cash, for an indefinite period.

When a Sky reporter asked Finance Minister Yanis Varoufakis why people should believe him when he said banks would open on Tuesday, he told her “you are spoiling a celebration of democracy with impertinent questions”. Just after midnight, Varoufakis announced he was considering introducing an electronic currency (banking IOUs) to keep the economy functioning. The government also hinted at emptying safety deposit boxes, which allegedly hold 10 billion euros. Real cash flow now rests on the European Central Bank releasing emergency funding.

If a favourable deal with Greece’s creditors can be delivered quickly, it will be a massive victory for Syriza. Estimates on when it might be struck have ranged from “in 24h we could have an agreement” (Varoufakis) to July 20 (another government spokesperson).

“The mandate you gave me is not the mandate of a rupture with Europe, but a mandate to strengthen our negotiating position to seek a viable solution,” said PM Alexis Tsipras.

But at a referendum celebration-cum-wake in the early hours of Monday morning, centrist yes voters said the result would expose Syriza for the bunglers they believe them to be.

“I think there will be incredible chaos,” said George Momferratos, a corporate financial adviser. “I think the government will come down, and God knows what happens.”

Apostolos Doxiadis, an author and outspoken critic of Syriza, said the ballot question, which asked Greeks if the proposal put forward by the troika (comprising the European Central Bank, the European Commission and the IMF) should be accepted, was the equivalent of asking someone if they would like to get cancer or not. “It’s a surprise it was 60% and not 80%.”

The referendum was much less about securing a better European deal, he said, than ensuring Tsipras’ position within his own patchy coalition of radical communists, former student activists and the far right.

“In that sense, he may think tonight that he has won a huge victory. But it has zero effect on the country’s economy, which is going from bad to worse,” said Doxiadis, adding that he believed a favourable deal with Greece’s spurned creditors was unlikely.

No deal may eventually lead to a euro exit. The vast majority of Greeks, including “no” voters, want to remain in the euro, and they don’t believe the “scare campaign” run by Greece’s creditors, who argued a no vote would precipitate an exit from the common currency.

But at a polling station in a suburban Athens school, Kostas Theodorou, a Syriza member, said the euro was “not a fetish. We can live with the euro, we can live without the euro. I prefer the euro, but I prefer mostly dignity.”

The Europeans who pushed a Grexit-fear narrative underestimated the extent to which Greeks have felt infantilised by the last five years of austerity. Greeks are incredibly proud, seeing themselves as both a modern, Western state and the inheritors of an ancient tradition, literally the epitome of Europe.

“Europe is a Greek word,” said Theodorou. “So if Greece is forced to go out of the eurozone, the eurozone will not have a childhood.”

Syriza have swung this referendum on a populism that hinged on hurt national pride and very real pain, especially among the young. Analysts reckoned on Sunday that 80% of the country’s youth favoured rejecting the EU measures. Youth unemployment now runs at 60%, three times the EU average. Young Greeks are locked out of the cushy, lifetime-tenure public sector jobs thrown around by previous governments to curry favour from interest groups. And they hold no truck with gradual, EU-imposed reforms that only send them backwards.

“Tsipras gave us this power. I can’t describe how big this is for us,” said Ismini Xirogianny, a university student.

As I finish writing, those same young people are still dancing in Syntagma. Walking to and fro past the floodlights that brighten the facade of the Parliament building, casting vast, exaggerated shadows across the halls of power.

Rundle: comrades, Greece is the word

It’s a bit like a condemned prisoner’s last meal. Feast tonight because tomorrow you’ll be dead.

Your use of words is interesting. The Bad guys are “the Troika” The saviour is “The European Central Bank”. There appears to be no hint of irony.

In both cases I think “The German People” is more apt.

Karl – the gesture touching the ends of his thumb and forefinger together and shoving a finger through the hole. does not means ‘same/same’. Think of a fig. Or a shelless mussel.

Why is the media almost silent on the Chinese stock market crash?