No sports for you. Sports and arts organisations have been told by the government not to hold sporting carnivals or festivals in remote areas to avoid distracting indigenous children from turning up to school. In a letter signed by Indigenous Affairs Minister Nigel Scullion and Education Minister Christopher Pyne, sports and arts organisations as well as state and territory governments are told the measure is part of Closing the Gap between indigenous and non-indigenous school attendance by 2018. The letter says “it is important that school is not unintentionally undermined by other activities including sports carnivals, visiting celebrities, and festivals that can result in students being away from school for lengthy periods of time”. The letter also says that there are now clauses in funding agreements “to ensure that funded activities contribute to improving school attendance objectives and avoid adverse impacts upon school attendance”.

Apart from the absurdity of asking cultural organisations to avoid large parts of the country, and the fact that Messrs Scullion and Pyne think its appropriate to do so, it doesn’t actually seem like an idea that would work. Don’t sport carnivals and celebrity visits encourage kids to go to school?

Budget cuts chop news choppers. Before the world of Twitter and social media, the sight of a news chopper emblazoned with Seven or Nine across the side was sometimes the public’s first hint that news was afoot. And while it’s not news that belts have been tightening at commercial television networks across the country, we were surprised to learn that the Seven and Nine network may soon be using the same news helicopter for vision for their evening bulletins. In a statement from Seven and Nine sent to Channel Nine staff on Wednesday, they were told that the networks were “exploring opportunities for the joint management of news gathering helicopters in all major capital cities”. The statement said the move was “exploring a joint approach to allow effective management of costs while ensuring ongoing competition on news gathering between the Seven and Nine Networks”. The networks are already sharing helicopters on weekends in some cities. Geoff Sparke, broadcast operations director at Nine, said “sharing resources is a practice internationally, most obviously in the US”. We understand the move has been pushed by Seven, which has already made cuts across its news and current affairs divisions this year. While Sparke said this was done elsewhere, we wonder what this would mean in the ultra-competitive world of the 6pm news bulletin. Will both networks send up a reporter and crew? Who gets the best seat? Or will we just see more tweets like these ones from yesterday? Does first still count if your rival gets the footage from the same camera? 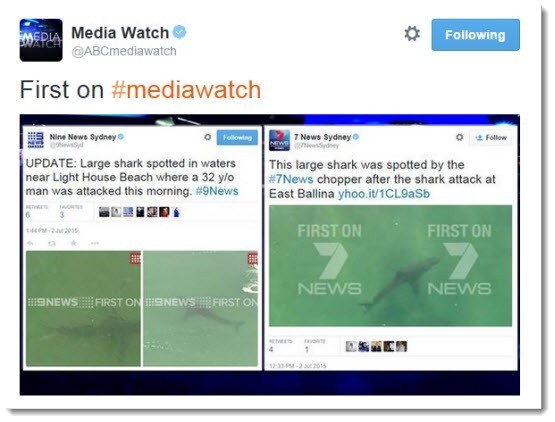 It’s finally here. You won’t be able to avoid hearing from Barnaby Joyce this weekend. His big agricultural white paper is out tomorrow after months of delays. You’ll be able to get your Barnaby fix on Insiders on Sunday morning, and then again on no-go zone Q&A on Monday night. Not to mention the papers and the 24-hour news channels, ABC radio news and public affairs — it will be a Joyce-a-thon of epic proportions. This selling campaign for the white paper exposes the essential hypocrisy of the Abbott government (and News Corp) about the ABC. It is needed to sell policy and other ideas, especially to regional Australia which is the National Party’s heartland.

Nothing to see here. Yesterday we reported on the bumps along the road with the almagamation of the Social Security Appeals Tribunal and the Adminstraive Appeals Tribunal. Now we hear that the problems were only with those whose terms were up for renewal:

“SSAT members with appointments that went beyond 30 June have all transitioned to AAT. The process that was not completed, and should have been, was for those whose terms ended 30 June and applied for reappointment, and others who responded to ads for members. Recommendations to government were made following the interviews in relation to about 40 appointments/reappointments but government has not acted upon them.”

A spokesperson at the AAT didn’t confirm if there had been any issues with the recruiting process, but said “in relation to the transition of SSAT members to the AAT, 115 members of the former SSAT became members of the AAT on 1 July 2015 in accordance with the Tribunals Amalgamation Act 2015“. Along with news of the reduction of members of the Migration Review Tribunal and Refugee Review Tribunal, this is what streamlining looks like.

Getting blood pumping. Over the last week MPs from across the country have been treating their Twitter followers to photos from their morning walks, as part of a challenge between Victorian Nationals MP Darren Chester and Queensland Labor MP Graham Perrett. The pair have been using #morningwalk to prove which part of the country is the most beautiful, which of course has led to some picturesque tweets (and not a green-and-gold tracksuit to be seen): 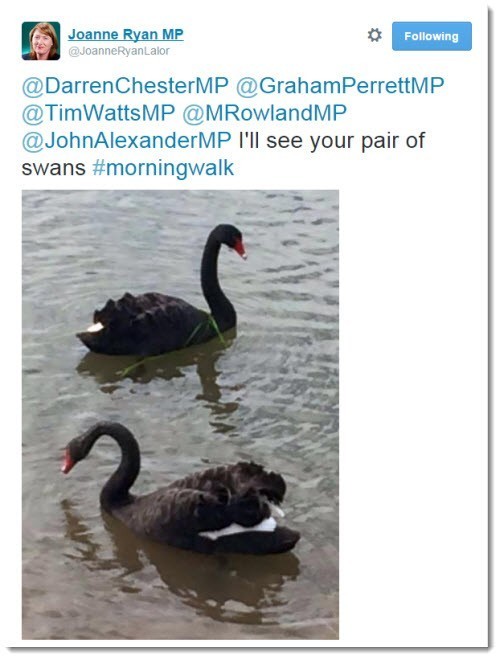 Ms Tips is quite partial to Chester’s pics of Lakes Entrance. Check out the hashtag and let us know who you think is the winner.

“it doesn’t actually seem like an idea that would work. Don’t sport carnivals and celebrity visits encourage kids to go to school”
No it does not seem like a good idea to get kids to school, more like a fucking RACIST approach to remote area kids. Are this mob serious. I wonder what the mums and dads of kids in Melbourne or Adelaide would say if the sports carnivals were cancelled for little Tarquine’s school

“You’ll be able to get your Barnaby fix on Insiders on Sunday morning” Thanks for the warning.

One of my pleasures is watching Insiders via the ABC site, not using iView which does not work where I live. It is such a pleasure because it is available later on Sunday and I can move the show right past Barrie’s guest. The only time I remember watching it in full in the last seven years was for Malcolm Turnbull two weeks ago. The others are mostly politicians and, regardless of party, never worth my time. Bland windbags, all of them. I start out watching and then flick the device along the bottom of the screen to the point where the panel returns.

It’s a catchy headline to suggest sports are to be banned in indigenous communities, but a totally irresponsible when the actual issue is about trying to improve indigenous student school attendance rates.
Will someone in the Crikey Commissariat Bunker please re-read the letter to which you hitched your yellow press article. Here it is in case you can’t find it. The letter said “it is important that school is not unintentionally undermined by other activities including sports carnivals, visiting celebrities, and festivals that can result in students being away from school for lengthy periods of time”. The letter also says that there are now clauses in funding agreements “to ensure that funded activities contribute to improving school attendance objectives and avoid adverse impacts upon school attendance”.
I can’t see any word in that which requires a Dictionary, Thesaurus or other learning aid.