If Labor has nothing more progressive to offer than same-sex marriage, there is nothing left. 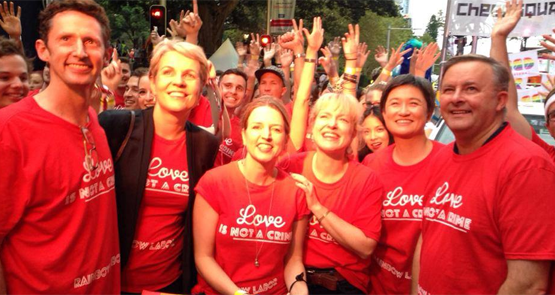 “Tamed by Miltown, we lie on mother’s bed …”

— Robert Lowell, “To Speak Of The Woe That Is Marriage”

This piece on same-sex marriage will of course spend most of its time sledging the right, but it will start by sledging the left. Years ago I had a conversation with a friend, a rueful, ironic but still committed member of the far left/Trotskyist movement, about the future for an old-skool left. He tried his best to defend the remnants of the movement. “The DSP,” he said, “have been in the forefront of the same-sex marriage movement”. Well, whoop dee doo. Twenty years earlier, in the great days of red planet posters featuring Marx’s assertion that marriage is just prostitution on a retainer, the left had a discourse about liberty, and not letting property conceptions overshadow human relations. By the 2000s, before their imminent disappearance, they were hitching Mother Courage’s wagon to an addendum to state-sanctioned marriage.

“God I’m sick of same-sex marriage,” one impeccable inner-urban leftist said to me last week. Pillow talk, ironically. She was as irritated as many of us are at this giant skywhale of a cause, blocking out the sun of more radical adventures. The move itself is simply administrative accounting; whatever occult force marriage might have had before the ’60s, no-fault divorce, etc, and then the reality TV explosion, The Bachelorette, etc, put all that to one side. It was always something of a con anyhow. Marriage and progenity yielded to marriage and markets in the 19th century, and it’s been the same ever since.

That said, same-sex marriage is absurd. It’s absurd. Two husbands? Jesus. The whole point of the energy of marriage, its whole juice is the public celebration of a private wounding. You’re at a wedding of a young couple, and it’s all in a church, etc, but the sole meaning is they’ll be fucking like rabbits that evening, and maybe making a baby. The baby they make will knit everyone at that ceremony related to each other, connected back through time by nature, mediated through culture. That’s what’s so fucking exciting about it. Jesus in the afternoon has endorsed your lubricious fucking in the evening. That’s why everyone else at a wedding gets laid. The wedding of Adam and Steve at a Fitzroy restaurant officiated by Johnny von Goes? Yeah, happy for you guys, but it ain’t the same. Soz. That’s why same-sex marriage doesn’t matter in the way the Jesus freaks think it does. Nothing will take away the pagan energy of the marriage of a fertile straight couple — not even the fascist Church that took it over in the 1100s to guarantee primogeniture and church lands, or the state that took it over in the 1800s to have a reliable baby factory for the factories and the army.

What’s surprising is the utter cowardice of the liberal mainstream in relation to this. Led by the Mad Monk, attended by Senator Erica and Cory BurnMeOhHarderHarder!i, the mainstream of the Liberal Party don’t have the guts to tell these remnant Savonarolas to fuck off — and if they don’t like it, quit and form their own party, and see where that gets them. Australians are a reasonable and unfussy people. Presented with an injustice, they tend to overturn it. Thus same-sex marriage. Indeed, the same-sex marriage moment could prove a modernisation moment for both parties. The centre can tell both Cory Bernardi and Joe de Bruyn to fuck off and form their own party. Let’s move forward a little.

For the ALP… if same-sex marriage is your go-to political wedge, you are more sad and fucked up than we thought. Affordable housing? Student debt? Childcare? Parental leave? The commute? No? You remain a cossetted bunch of student pollies on six-figure salaries who have no idea of most people’s struggles? Your rightists are so indifferent that you’ll take whatever comes along, your leftists are such condescending do-gooders that you won’t focus on the lives of the working-middle class who should be your base, turning instead to the numerically insignificant poor? If same-sex marriage is all you’ve got, you’re not a party, you’re a support group for burnt-out student pollies with nothing to offer. Fuck off to super boards, homes on the coast and endless Chinese meals with Richo, and let someone else create a real progressive alternative.

Think I’ve hit everyone now. Miltown? A popular tranquiliser in the ’50s. The entire ALP frontbench appears to be on it.

I’ve never been much of a Gillard fan, but I think this is one issue where her views stacked up. From what I understand, while not expressed so dramatically and provocatively as Guy’s, they were along the same lines.

Finally someone has said it.
We must see same-sex “marriage” as the minor first world problem, with too much energy expended on it, when there are far more important issues to address.

Labor are now virtually nothing. Before you tag me as on the looney left or right, note that I am a Labor Party member – but not for much longer.

What else can the ALP do as it has ceded ground on so many issues, like refugees and terror?? This is all they have left.