Poll Bludger: can Abbott close polling gap before the election?

Tony Abbott has his work cut out for him trying to chase lost ground in Queensland, South Australia and Victoria. 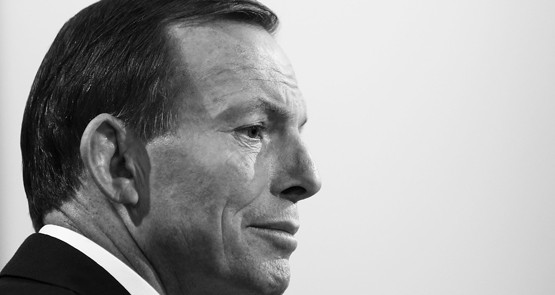 After a dismal start to the year, Tony Abbott now finds himself back within striking distance of victory thanks, in large part, to a slump in the Labor primary vote in New South Wales.

However, his hopes for a second term remain imperilled by the weakness of the Coalition’s position in Queensland, where every one of the eight seats gained since Kevin Rudd’s statewide triumph of 2007 remains under serious threat.

Those are the main findings that emerge from an analysis of all published polling since the 2013 election, based on published and unpublished breakdowns at state level.

After rallying strongly in the second half of last year, and peaking at just over 40% at the time of the Liberal leadership spill vote in February, Labor’s primary vote in its traditionally strong state of New South Wales is now back below 35%, returning it to its disastrous level at the 2013 election.

The situation is somewhat better on two-party preferred, which reflects the other phenomenon of federal polling over the past few months — a surge in support for the Greens, who appear to have lost nothing from the transfer in leadership from Christine Milne to Richard Di Natale, while gaining a good deal from a weakening in Bill Shorten’s personal standing.

Trend data shows Greens support in New South Wales to be up from 8% at the election to 12.5% — effectively enough to guarantee it a seat in an ordinary half-Senate election, something it has only achieved there previously in 2001 and 2010.

Given the 80-20 split that can typically be expected of Greens preferences (with 80% flowing to Labor), this implies a two-party swing to Labor of around 3.5%. However, that only gives them cause to feel confident of recovering about three of the eight seats that were lost there in 2013.

The Greens have gained even more strongly in Victoria, placing their overall vote at around 16% — enough to guarantee two Senate seats at a double dissolution, while leaving Adam Bandt secure in his position in the seat of Melbourne.

Labor has also picked up solidly in Victoria since 2013, with polling currently indicating a two-party swing of at least 5%. However, this is less good news for Labor than it might be due to the state’s paucity of marginal seats, with only the three that were lost in 2013 — Corangamite, La Trobe and Deakin — looking realistically attainable.

For the Coalition, the single gloomiest element of the national polling picture is a drop in its primary vote in Queensland from 45.7% at the election to around 42%, despite the fact that barely 2.5% remains of the 11% vote recorded by the Palmer United Party.

The Coalition has at least managed to improve its position since the time of the January 31 Queensland state election, at which time it temporarily slumped to around 38%. However, Labor remains on course for a two-party swing of around 7%, implying a gain of around eight seats — leaving it only one short of what it achieved in 2007.

The situation in Queensland has a parallel in Western Australia, which has shared Queensland’s distinction over recent elections as the Coalition’s strongest state, as well as its standing as the main beneficiary of the now-spent mining boom.

Both states are now recording parity between the two major parties on two-party preferred. In Western Australia’s case, this suggests that Labor stands to gain three seats to achieve its best result since 2001, when local hero Kim Beazley was at the Labor helm.

The chief idiosyncrasy of polling trends in Western Australia relates to the Greens, whose support appears to have declined slightly over the past six months, while surging everywhere else.

This largely reflects the peculiar circumstance of the state’s special Senate election in April last year, when the controversies surrounding Labor Senate candidate Joe Bullock resulted in an exodus of left-wing voters to the Greens.

It would seem that the unwinding of this effect has cancelled out the broader improvement in the Greens’ standing, leaving Greens support nationally and in Western Australia at around the same level.

South Australia is notable in being the only state to have resisted the shift back to the Coalition since February, whereas Labor appears to have recorded no improvement at all in Tasmania compared with the 2013 election, when the Liberals poached three of the state’s five seats after emerging empty-handed in 2007 and 2010.

In aggregate, Labor has maintained a national two-party lead of around 52-48 over the past few months, with the most recent polling providing little support for the press gallery consensus that Tony Abbott has been asserting his dominance.

With all the advantages of incumbency on his side, Abbott would nonetheless have reason to feel confident that he could close the gap over the course of an election campaign, whenever might that be.

But merely closing the gap will only be sufficient if he can substantially lift his stocks in Queensland, where any swing of the pendulum can be relied on to do serious damage to the party caught on the wrong side of it.

I would have thought that the greens would have lost more than a little favour with their vote on aged pensions.

William – I have yet to see you admit that the Greens’ numbers before the 2013 election were much higher than the actual vote they received in that election, nationally. If my memory serves me correctly, the difference was 3-4%. So when the voting public are faced with another 3 years of the rAbbott, they will return to Labor this time around.
Unless they have completely taken leave of their senses????

The overestimate of the Greens vote in the 2013 pre-election polls ranged from nothing (Newspoll and Galaxy) to 2% (Nielsen and Morgan). My poll aggregation presumes to correct for this.

CML, having you on our side never fails to increase the degree to which it seems to me the Coalition might win.

CML – with preferential voting people don’t have to “return to Labor” to vote Abbott’s idiot government out; they can confidently vote Green and preference Labor if they want to.