Fully half of Junkee Media's revenue comes from native content. And other media tidbits of the day.

Junkee eats Sound Alliance. Junkee Media says 50% of its revenue comes from native content — that is, the publication of articles written for the purpose of promoting their advertiser.

Native content has been booming in recent years, and smaller digital publishers have been some of the first beneficiaries. Junkee travel site AWOL, for example, is a content-marketing strategy formed for Qantas.

Chief executive Neil Ackland said that this move towards native content has been dictated by a need to develop new strategies that return greater yield from its advertisers, and capitalises on the public’s consumption of news via mobile (which limits flashy ads and the like). Noting his company’s rapid uptake of this form of advertising, he said Junkee Media’s size and editorial direction made it an easy fit. “We are not the Wall Street Journal [and] … don’t see ourselves as a hard, breaking news site,” he said.

Junkee Media yesterday changed its name from Sound Alliance to reflect the “transition from a music only publisher a decade ago to the youth-focused lifestyle publisher”. The media company has also integrated its other titles – including inthemix, FasterLouder, and AWOL — into the one domain at Junkee.com. — Crikey intern Aron Lewin.

What price a front page. Yesterday’s Herald Sun splashed with explosive photos of Gold Coast Suns player Harley Bennell seemingly using illicit drugs. Needless to say, the exclusive was promptly picked up everywhere else, but The Age was decidedly sceptical, writing articles on Bennell’s mental health as a result of the exposure instead. To boot, The Age referred back to an earlier article it published on Tuesday, revealing how someone was shopping around photos of an undisclosed Suns player for a minimum price of $15,000.

“A member of the public contacted Fairfax Media seeking an equal or better price than $15,000 offered by the Herald Sun for four photographs of a Suns player taking drugs in a hotel room. The Age declined,” a report by Samanatha Lane noted.

Crikey contacted the Herald Sun this morning about the allegations, but received no response. — Myriam Robin

Consider the source of criticism, Oz warned. The front page of today’s Australian features an interview with former ABC managing director Jonathan Shier, who says he doesn’t think much of Q&A as it’s all somewhat predictable and that he believes Tony Jones makes a bad host.

Shier was a highly controversial managing director of the ABC — he lasted only 19 months (the tumultuous period is charted by Margaret Simons in this piece from The Monthly‘s archives).

Today at Aunty, The Australian‘s editorial upon Shier’s appointment (on March 17, 2000) is being shared around. Here’s part of it:

“Mr Shier’s appointment in November was widely considered controversial and even naive: few in the industry had heard of him … Many of these concerns are well-known. Prime among them is the shadow of his affiliation with the Liberal Party and the question of whether his appointment was political. More obvious is Mr Shier’s lack of public broadcasting experience: his previous post was at a small European commercial station. He has not managed a budget anywhere near the size of the ABC’s and much of his career has been spent in advertising and marketing. His absence of radio experience is also of concern considering the importance of this facet of the ABC’s business. His lack of programming experience raises yet further questions…..

“This focus on producing quality news and current affairs makes it tempting to judge the ABC’s overall performance in the light of this one area of operation. It is a temptation that politicians and interest group leaders frequently abuse. But this focus is far too narrow and may be politically motivated. For this reason Mr Shier must not be tempted to change the ABC’s news and current affairs without considering the source of criticism. To jeopardise the ABC’s independence is contrary to the legislation under which it operates.”

Meanwhile … The ABC has issued a correction over how Emma Alberici relayed comments by Tony Abbott and Zaky Mallah in a Lateline segment last week:

“Emma Alberici stated that Tony Abbott referred to Zaky Mallah as a ‘convicted terrorist’. Mr Abbott’s exact words were that Mallah was a ‘convicted criminal and terrorist sympathiser’. The presenter later quoted Zaky Mallah saying on Q&A that Steve Ciobo’s comments would ‘encourage [Australian Muslims] to join Islamic State’. Mr Mallah said that Mr Ciobo had ‘justified to many Australian Muslims in the community tonight to leave and go to Syria and join ISIL’.”

Even the Beeb is cutting jobs. The BBC is cutting more than 1000 jobs and looking to make up a 150 million pound (around A$300 million) shortfall in its licence fee income as UK TV viewers cut the cord and move online. The latest cuts are in addition to the savings of around 1.5 billion pounds identified in two previous rounds of hacking and slashing that has more than 4000 staff chopped or scheduled to go .

In a speech to staff overnight and in a memo BBC boss Tony Hall said the cuts would occur mainly in middle-level management and cutting the back-office areas of marketing and communications. Most of the job cuts won’t start until early 2016. The shortfall has come as people drop their TV licence fees and abandon terrestrial TV and move to watch TV online via broadband offerings, such as streaming, or via mobile devices. part of that change has been driven by the BBC itself through the growing success of its iPlayer catch-up service (which is the model for the ABC’s iview here, but at a considerably cheaper price).

Some 50 million pounds will be saved by merging divisions and cutting layers of management. Senior management roles will be cut across the board. In some places there are currently 10 layers of people, and this will be cut to a maximum of seven in all areas. The original driver for the cost-cutting was the freezing of the annual licence fee until 2017 (negotiations are already underway for a new five-year funding period from 2017-18). On top of the frozen fee, the BBC has been told to pay other costs, such as its broadband rollout. The Cameron Conservative government, which detests the BBC like the Abbott government does the ABC here, is about to issue a green paper on the BBC’s future in the next month or so. Proposals floated in selected leaks from the government have included making the BBC cover the cost of free licence fees for the over-75s, (which will cost hundreds of millions of pounds) as well as decriminalising non-payment of the licence fee, which could also cost the corporation 200 million pounds. — Glenn Dyer

Front page of the day. A sad day for Adelaide and the AFL. 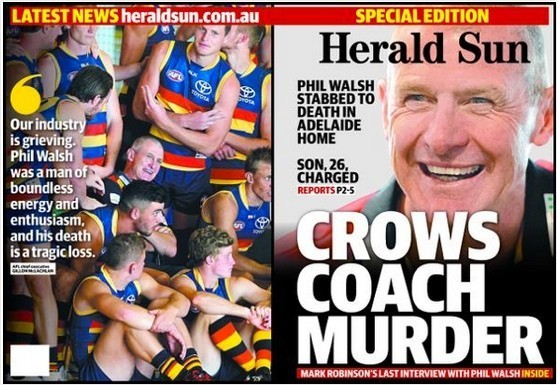