Greece should just use bitcoin. Actually, bitcoin can run the country

Greeks face a choice: stay in the euro or return to the drachma. But RMIT economics professor Jason Potts says there is a third option: bitcoin. 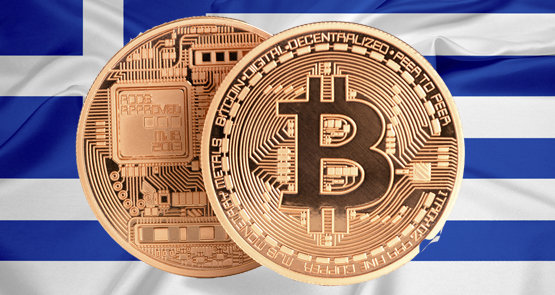 One of the great lessons of the 2008-09 global financial crisis was the folly of trusting a government-controlled banking system, and of permitting government interference in financial lending. The current meltdown in Greece is teaching a closely related lesson on the private costs of using government money. But there is another option: the Greeks could all use bitcoin.

Governments regularly abuse the trust of their citizens by debasing the currency through printing money or accumulating public debt in order to pay for its spending. They also abuse that trust by controlling private access to money and its movement (e.g. capital controls), as the Greeks have become painfully aware this past week.

But an economy does not actually need government money — it can, and often has, run on privately issued currencies. Gold is one example, and up until 1911 Australia had numerous private currencies. But the best-known newly fledged private money at the moment is bitcoin, which is a crypto-currency.

A crypto-currency is an internet-based electronic money and payments system that is backed not by trust in government, banks, or any organisation, but by trust in mathematics, or, to be precise, in the competitive distributed computation of cryptographic hash functions. It is, in essence, electronic gold, which is better in many ways than real gold.

When a nation and its economy begins to collapse because of the long-run effects of government abuse, which usually occur to finance government projects such as wars or channeling resources to politically favoured groups, what happens is that the real parts of the economy are driven underground. A cash economy, or worse, a localised barter economy materialises, which is highly constraining and burdensome. The economy shrinks as the parts of it that rely on even moderately sophisticated financial intermediation or extended networks of exchange collapse. The shattered economies of the myriad failed states throughout the 20th century are testimony to this.

But with a crypto-currency, a radically different prospect could in principle occur: namely a state could collapse, but it would not take the economy with it. The Greek economy might not necessarily collapse underground, shrinking as it goes, but might instead disappear behind the veil of cryptography, shedding its government parts completely.

This is an intriguing possibility that few seem to have noticed. It certainly explains the spike in the bitcoin price this week. But most of the attention seems to be on Greece running out of money, and of the awfulness of the choices that Greek citizens face. But there is actually a third option: abandon government money altogether.

The “yes” vote would have Greece stay with the euro, and the “no” vote would invariably require a return to the drachma, or similar. But a shift to private money, such as bitcoin, completely bypasses the basic problem, which is the mess that the governments, over many years, have made of the Greek economy.

By shifting to a bitcoin economy, individual Greeks would simply cut the government out of the equation as they then got on with their economic lives. That cuts out its debt and taxes, but also the services the government furnishes. So it’s a form of secession.

Now such an option will be painful for those who have their own economic fates tied to the government, which obviously includes a large number of Greek citizens dependent upon welfare payments, and it would be unpopular among those holding the other side of the Greek public debt. Plainly, it would be devastating to the extant ruling political classes, both in Athens and in Brussels.

But such a “conscious uncoupling”, to use a phrase popularised by Gwyneth Paltrow, would be of enormous benefit to those seeking to produce and work and consume in Greece, and those around the world who wish to trade with them. In practice, that’s a much larger set of people.

Even the credible threat of what Trent Macdonald, in a recent PhD thesis, calls “nonterritorial crypto-secession”, in which a large group secedes from the nation state, but without going anywhere or forming a new state, might well be enough to inspire discipline on the political classes. The prospect that the “blockchain” — the technology platform of bitcoin — might also be used for many other erstwhile functions of government, such as property titling, marriage registry, recording contracts, or coordinating the private production of public goods, and so on, only reinforces this position.

Political scientist J.C. Scott in The Art of Not Being Governed referred to the role of “shatter zones” as places where those who were preyed on by the state could retreat to — the highlands of Zomia in south-east Asia, or the Appalachian mountains in the US, where Confederate deserters went to escape government conscription. The existence of such shatter zones constrains the depravations of the state.

A crypto-currency is also an escape, a digital shatter zone, but it doesn’t involve hiding in the mountains. You can stay exactly where you are and get on with your business, uncoupled from the state. And bitcoin and the blockchain are not just about “crypto-secession” but also “crypto-statecraft”. It might be better to exit behind the veil of cryptography and start new parallel institutions than waste energy fighting old ones. That’s a prospect many Greeks might value right now, and which Greek politicians, as well as those the world over, might reasonably fear.

What cave did Crikey find this crypto-libertarian? What a load of crap. Pick up your game and get someone to do some real analysis.

But what if the state then throttles all internet traffic to severely restrict Bitcoin transactions?

I realise this “use Bitcoin” argument is tongue in cheek, but you might also want to read this before waxing rhapsodic about it: http://motherboard.vice.com/read/bitcoin-is-unsustainable

One of the great lessons of the 2008-09 global financial crisis was the folly of trusting a government-controlled banking system, and of permitting government interference in financial lending.

Why are you blaming Government when the problem was banks ?

But with a crypto-currency, a radically different prospect could in principle occur: namely a state could collapse, but it would not take the economy with it.

Yes it would, because with all the looting, and the raping, and the pillaging, and the fraud, and the theft, and the violence, there wouldn’t be much of an economy left other than for food and weapons.

Political scientist J.C. Scott in The Art of Not Being Governed referred to the role of “shatter zones” as places where those who were preyed on by the state could retreat to — the highlands of Zomia in south-east Asia, or the Appalachian mountains in the US, where Confederate deserters went to escape government conscription. The existence of such shatter zones constrains the depravations of the state

“There are two novels that can change a bookish fourteen-year old’s life: The Lord of the Rings and Atlas Shrugged. One is a childish fantasy that often engenders a lifelong obsession with its unbelievable heroes, leading to an emotionally stunted, socially crippled adulthood, unable to deal with the real world. The other, of course, involves orcs.”

It would be nice if we could take all the Libertarians in the world and drop them onto a desert island somewhere, just to see how well they fared without the rest of the world to help them along. Given the moral bankruptcy of most of them, it probably wouldn’t fare any better than this:
http://www.salon.com/2014/09/16/ayn_rands_capitalist_paradise_lost_the_inside_story_of_a_libertarian_scam_partner/

Bitcoin behaves like an asset, not a currency. Its value fluctuates drastically, which makes it useless as a store of value and a medium of exchange. The number of Bitcoins cannot expand as output expands. Consequently a Bitcoin-denominated economy would quickly stop growing.

A sovereign fiat currency with a flexible exchange rate is by far the best monetary system for a society. Greece should return to issuing its own currency. This will give the government maximum monetary and fiscal policy space, and enable a return to full employment.