Dear rural MPs: you wanted a timid Abbott, well, you got him

Tony Abbott's political recovery has come at the expense of his capacity to pursue any reform -- and now backbenchers have found that that can be costly. 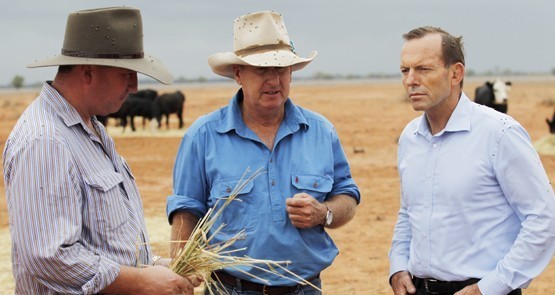 The backbenchers who have been so heartened by Tony Abbott’s switch in tactics since February are now discovering the price that must be paid by the government: it is incapable of any reform that can’t be turned into an attack on Labor.

Nationals and rural Liberal MPs — especially the former — tend to have strong views on regulation of regional media, where broadcasting, in particular, has been “consolidating” for decades in the face of a declining agricultural workforce and many large regional centres growing at the expense of smaller communities. In the 1990s and 2000s, it was regional radio that was under the hammer, with smaller broadcasters either selling up or getting big, with consequent loss of local content. The Nationals didn’t like it and used it as the basis for some heavy-handed regulation in the 2006 media reform package.

Now it’s regional television’s turn, except the major regional broadcasters — Southern Cross, Prime, WIN — don’t have the option of merging or consolidating. All they can do is cut costs, and that means regional news services across the country have been being axed left and right, even by WIN, which traditionally had a commitment to strong local news services, especially in communities where it was the pre-aggregation incumbent.

One straightforward fix, as everyone knows, is removing the “reach rule” that prevents a single licence-holder from reaching more than 75% of the population — an analog-era rule that almost no one can find a good reason for retaining. This would allow the metropolitan broadcasters to link up with regional broadcasters — or, in the case of WIN’s Bruce Gordon, the other way around.

The caveat to “almost no one” is Kerry Stokes. Seven has little interest in linking up with a regional broadcaster because, unusually, it owns regional broadcasting licences itself, mainly in Queensland — it has long been on the very cusp of 75% of the population in terms of reach. From Stokes’ point of view, the only upside is of dumping the reach rule is for his competitors.

News Corp isn’t keen on dumping 75% either: it helps keep Ten in orbit around the Murdoch family, and Rupert isn’t interested in any media reform package that doesn’t start at, and probably end, at anti-siphoning. Foxtel is basically the only thing afloat in the sea of News Corp red ink, so that’s his main game.

So, faced with backing a logical, strongly supported piece of reform that would deregulate a key industry and help prevent regional communities from losing local news services and the jobs that come with them, or keeping Stokes and the Murdochs happy, what does Tony “open for business” Abbott do?

Well, it’s a no-brainer. Stokes and the Murdochs have frozen media law reform — which has had the hilarious consequence of Rupert’s one-time viceroy, John Hartigan, who now chairs Prime, complaining about Abbott kowtowing to his former boss.

It’s a demonstration of just how weakened Abbott is on policy that even when reform is strongly backed by most of the relevant industry and by his own backbenchers, he doesn’t feel confident enough to be able to sell the reform in the teeth of opposition from Stokes and the Murdochs.

Go back a little while and you’ll understand just how weird this looks. Despite Rupert’s reputation as one of the world’s most influential media moguls, when it comes to media reform in Australia, Rupert has routinely been given leftovers at best from successive governments. Here, free-to-air TV rules the roost, and what commercial television broadcasters want, they almost always get. Even in 2006, the free-to-air stations walked away with the lion’s share of the wins from the government’s media package, while Rupert got a lame “use it or lose it” anti-siphoning proposal.

Now Abbott is so weak, he wants complete unanimity across the entire media industry before he’ll move on any reform. He doesn’t believe he can sell anything that isn’t completely endorsed by all Australia’s media companies — companies that, normally, wouldn’t even agree on motherhood if one of their competitors proposed it. All he can imagine is what might happen if Rupert and Stokes decide to give him a touch-up via News Corp and Seven.

This is the Abbott the backbench demanded: one determined not to pursue any reform if it was going to have any political cost or put their re-election in danger. If you’re a Coalition backbencher, you may well not care if the government doesn’t undertake any of those nebulous “economic reforms” the media keeps talking about. Indeed, if you’re a National MP, you might outright oppose many such reforms. But Abbott is now timid across everything that can’t be turned into a three-word slogan about stopping something, a campaign against death cults or an attack on Labor. And media ownership is none of those things.

Disgruntled regional backbenchers perhaps should have been careful about what they wished for.

ScoMo, our man in Kabul … Stoking the COVID fire … the Bezos lockdown

Will conflicts of interest undermine the royal commission into Crown’s Perth casino?

In David Leckie farewell, Stokes unites with Murdoch against the world of ‘woke’

Even Stephen Conroy when he was minister in 2010 said “As we move into high-speed broadband and TV stations start streaming their content live, I just don’t think that that 75 per cent reach rule can survive. The technological change is going to wash over the top” Turnbull would probably get Labor’s support. It says a lot about how this government isn’t interested in any sort of reform.

BERNARD KEANE: I’m puzzled by your “poor Rupert” tack. Not only is this flagrantly questionable but it’s an open secret that Rupert Murdoch owns the present government. No matter what happens; how can he lose?