The Abbott government clearly has no idea how anyone in China thinks, nor what to do to protect this vital relationship. 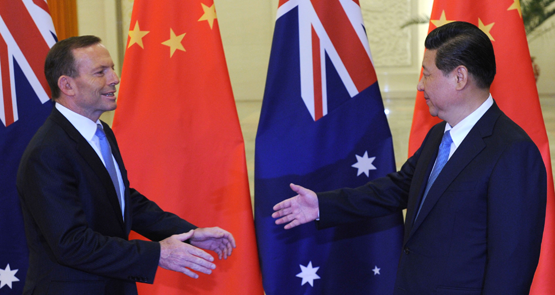 Tony Abbott has suddenly found himself in an incredibly uncomfortable foreign policy bind thanks to some extraordinary comments by his handpicked departmental chief Michael Thawley — effectively Australia’s No. 1 public servant — that will have both Beijing and much of Canberra in apoplexy.

He made the comments only a day after Australia was the very first  of 50 countries to officially sign on as a founding member of the Asian Infrastructure Investment Bank — an organisation that China is very much leading and over which it has veto power — at a ceremony in Beijing.

John Howard’s former policy adviser and Washington ambassador then warned against “hysterical” debates about China’s rising power and American decline. He said Australia’s role was to encourage American leadership and “get our economy back in gear” while also maximising our military power.

“Given that we think in my view that US leadership is going to be crucial in the period ahead, we ought to maximise our capacity to influence US strategy and to make sure it maintains its alliance commitments,” he added.

There was even more. China is Australia’s largest trade and exports partner by far, but in comments so far unreported, Thawley said that those who thought that was more important to Australia economically than the US were wrong, according to people who attended the event.

Even the casual observer may have notice that when the Chinese economy slows, as it has in the past two years, so does Australia’s. Sure, the US has greater total investment stock in Australia by dint of more than 150 years of investing, but China is catching up, and given the opportunity, would happily buy up many of the assets the US owns.

Thawley had already made clear his views on the Australia-US relationship and the need to maintain its primacy:

“Having watched it all from the Washington end for over five years, I have concluded that the efforts of our thinking public class to force us away from the United States come from a lack of confidence in the ability of their fellow Australians to manage our relationship with the United States. It is driven by timidity and condescension, not strength or a hard-headed assessment of our national interest.”

The fact that Thawley may be right in some ways is not the point. As an unelected public servant he would seem to have no role to play in laying out Australia’s foreign policy, much less opening the kimono on what the Prime Minister and his inner circle clearly really think about China. We know that they agree with Thawley because, rather than admonish his Sir Humphrey or even try and diplomatically distance himself from the comments, Abbott, in his usual haste (remember the mining inquiry debacle?), jumped in boots-and-all to support him.

By all accounts, the audience was stunned following Thawley’s address: “It was just strange, the whole thing was strange, even his body language was strange,” one participant noted.

What is also clear from Thawley’s comments, and Abbott’s imprimatur, is that there has been a seismic shift in power in Canberra on foreign policy matters. For the first 15 months of Tony Abbott’s prime ministership, Julie Bishop drove the Coalition’s foreign policy. She has assiduously taken the careful advice of her departmental chief, the widely admired Peter Varghese, at every turn.

No more it seems, and the Department of Foreign Affairs and Trade has once more been sidelined by the PM’s own office and department. Thawley is backed up by his former No. 2 in the Washington embassy, Andrew Shearer, Abbott’s foreign policy adviser.

So now, barely two weeks after the “triumph” of the Australia-China FTA, the relationship is in need of some serious repair. Not giving a country like China face at times like this is just plain dumb, but nobody in Abbott’s circle appears, or indeed in cabinet, seems to have any inkling how the Chinese, or indeed anyone in Asia, thinks.

Just ask Marty Natalegawa, former Indonesia foreign minister, who attended the conference and gave a very dark assessment of the Australia-Indonesia relationship in an interview with Sky News last week:

As usual his comments were dismissed by Asia lightweights like Immigration Minister Peter Dutton, a man who has sent refuges to Cambodia despite spending maybe 48 hours in Phnom Penh.

The thing is, our tin-eared, relentlessly internally focused politicians keep insisting these relationship that are so important — China and Indonesia — are just fine, yet they spend no time outside airports and meeting rooms in the capital cities of these large and complex countries.

Thawley’s comments aside, there’s another hurdle looming for the Australia-China relationship with the public increasingly opposed to Chinese investment, particularly in the property market. But as the Chinese economy continues to weaken, the Australian economy is dragged down, too. This brings the Australian dollar lower and adds a further discount to asset prices, so China will bring more, not less investment. Add to this the Chinese sharemarket’s extraordinary gyrations, which also make offshore assets look increasingly attractive.

There is now a very real chance of become an election issues, one that the Nats and Greens, those odd protectionist bedfellows, will be sure to exploit.

So who would want the job as China’s ambassador when Frances Adamson finishes a term in December? Her deputy in the China FTA, Graham Fletcher, an old China hand who speaks the language, and DFAT deputy secretary Heather Smith are also in the mix along with a few outsiders.

But maybe Australia foreign policy supremo Michael Thawley will want to put his own man, Shearer, into the job, a move many diplomatic greybeards believe would be a mistake. Whoever gets it, as Adamson will be able to tell them after she spends the next few weeks trying to explain away Thawley’s comments in Beijing, they are likely to be for a tough time.

Read this and despair. One really has to wonder what motivates Abbott. There is a huge disjuncture between his original claim of “more Jakarta, less Geneva” foreign policy and the day to day reality. There are huge changes going on in Eurasia, led by China and Russia but involving other countries through BRICS and the soon to be expanded SCO. The Chinese government recently announced that the $21 trillion of private Chines savings could be used for foreign investment. The Chinese PM is set to announce tonight our time a $321 billion investment fund for Europe. There are other huge important developments occurring; yet we get ignoramuses like Thawley and Abbott leading us further and further away from our real interests.

Did Tone have to use the tradesman entrance for this “meeting”?

A desire for the world to conform to his simplistic, conservative interpretations so that his opinions, policies and connections based upon those interpretations will be shown to be valid and relevant to the voting public. The public that he wishes to make loyal and unquestioning subjects of the future King Abbott.