Eric Abetz is so lost at sea when trying to describe why he opposes same-sex marriage. Crikey's writer-at-large is struck with an urge to help him out. 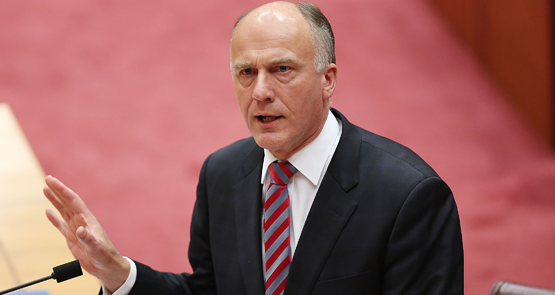 Had you pointed a microphone at a drowning man you would not have got a more desperate interview performance than that given by Eric Abetz regarding same-sex marriage on AM this morning. Senator Erica had already contributed a mostly irrelevant piece on the subject to The Age this morning, in which he dilated on the US Supreme Court decision that struck down anti-equal marriage laws and amendments in all states, based on an interpretation of a constitution that does not apply to us. Having wasted that bit of real estate, Senator Erica doubled down on bad faith in the interview, pointing out that uh everyone had uh said uh at the time of the uh republican debate that there was a uh majority public opinion in uh favour of a uh — I’ll stop this now — republic, and look what happened.

By mid-morning, Erica had drifted further out to sea, arguing on Agenda that a vote for same-sex marriage would allow polyamorous marriage in the door. Sigh, let’s go through this again. The argument against polyamorous marriage licences — involving more than two people — is structural. The key point of marriage is to give one other person a key role in decisions regarding medical treatment, inheritance, children, etc, etc. Polyamorous marriage can be argued against on the grounds that having two surviving spouses would defeat the purpose of the institution — whatever the gender arrangement. It’s an entirely separate issue.

Blame the meeja, muddy the waters, go spurious. If this is the best that the anti-same-sex marriage crowd can do, they’re sunk. Their only chance of public success — whatever the parliamentary vote might be — is to emphasise the doctrine of prudence as regards significant cultural change: affirm the importance of total equality of civil partnerships and marriage, and urge the public to tread carefully in altering ancient rites (not my argument, but these people need the help). Erica’s a boon for the marriage equality movement, because he’s doing double duty — he wants to fight the equality push and preserve the comforting delusion that we remain a Christian society. Service to the latter is making it impossible to fight the former. The sound of a man drowning in the Tasman.

By the way, you know who else the Austrians voted for …

And what is it with conservative male politicians, in Oz & the USA, regularly raising the prospect of multi partners and/or the participation of animals in same sex marriage?

Yeah, they must have some interesting DVD collections…

zut alors, its the only argument they have, surely.

Yeah, Tony and Eric are right on the money here – the only thing holding me back from joining my sister and dog in a polyamorous marriage is that it’s illegal. Once it’s law, everyone will want to do it.