New housing the only bright spot as governments go missing

Unlike last year’s favoured phrase, “Team Australia”, Tony Abbott’s self-description “the Infrastructure Prime Minister” still gets used occasionally by the PM, albeit not nearly as much as last year. But it looks more and more ridiculous as data emerges on what’s happened to infrastructure spending under his government.

Last week the International Monetary Fund — as always, reflecting the behind-closed-doors views of senior econ0crats in Treasury and the Reserve Bank — gave the government a mild touch-up on infrastructure. It wasn’t quite as robust as Glenn Stevens’ cry of exasperation earlier in June, but clear nonetheless. In the IMF’s view, “economies like Australia — with an output gap, accommodative monetary policy, and fiscal space — benefit most from debt-financed infrastructure investment, with the growth boost largely containing the impact on the (low) debt-to-GDP ratio.” Accordingly, it recommended:

“Continuing to establish a pipeline of quality larger projects with transparent cost-benefit analysis, such as that being prepared by Infrastructure Australia. Broad political support for such a pipeline would reduce uncertainty and boost confidence.”

Yesterday, we saw further evidence of how the “pipeline” of infrastructure projects is barely a trickle. The engineering construction figures for the March quarter from the Australian Bureau of Statistics showed a massive fall in infrastructure spending — down 7% in the March quarter alone in seasonally adjusted terms and down 20% in the year to March.

Much of that fall is the ongoing end of the mining boom. If you break down the spending into the major states, you can see that those dramatic falls are, 1) from Queensland and Western Australia, and 2) not going to end any time soon. 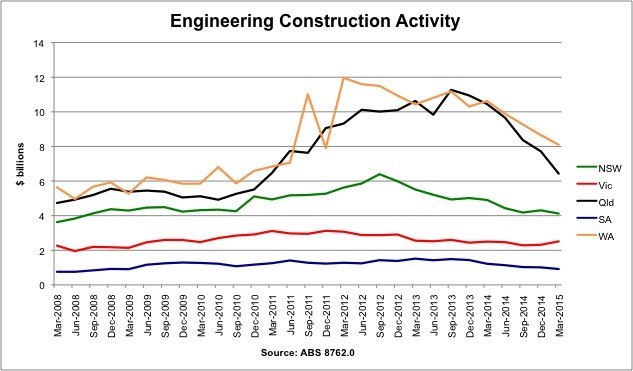 No government could offset that huge fall in investment in Western Australia and Queensland — and, in any event, as the IMF and the Reserve Bank have suggested the idea should be to have a steady pipeline of major projects providing consistent government infrastructure spending, rather than trying to offset what’s happening in the private sector. That approach would not merely provide an ongoing source of economic stimulus but ensure there wasn’t a repeat of what happened at the top of the mining boom, when mining companies and construction firms were bidding against each other for Australia’s limited pool of engineers and construction workers (and complaining about how outrageous it was that Labor was allowing the wages of engineers and construction workers to blow out). 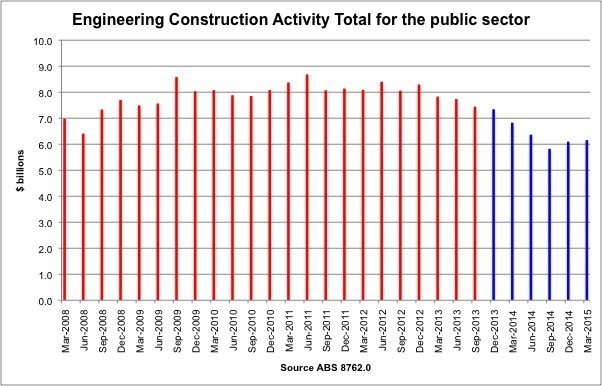 Public infrastructure investment has slumped under Abbott, although he blames state Labor governments, even as his “Deputy Prime Minister for Infrastructure” (as he calls him) Warren Truss announces yet another re-heated Labor-era infrastructure project.

And there was another development yesterday that further exposes our problems with infrastructure investment. Big global infrastructure investor Brookfield is from Canada, and has billions invested in railways, port and other assets in the US, Australia and across Asia. It has now lobbed an $8.83 billion takeover proposal for Asciano, the country’s leading port and rail operator (based on the old Patrick business, which readers would recall from the waterfront brawl).

Brookfield already owns rail in WA, ports in Queensland and building and construction across the country (it grabbed the huge, but weak Multiplex company from the Roberts family of Perth a few years ago) and owns more than $7 billion of assets in this country. It is looking for new ones to buy — but it’s cheaper to pick up existing assets like Asciano than to wait for new projects, such as road and ports and airports to be built (if they ever will be). It’s a remarkable indictment of the lack of the infrastructure pipeline that the RBA and the IMF want.

For much of the year, Stevens and his senior officials have been bemoaning the way the private sector has been favouring share buybacks and higher dividends over investment. The bid for Asciano is in the same league — rather than risk the investment of nearly $9 billion in new assets over the next few years, Brookfield has chosen the quick and dirty route of buying existing assets. No new investment is created to benefit the economy.

The federal government will, of course, welcome the deal no doubt, saying that it shows that Australia “is open for business”, when it isn’t open to new investment of the sort that benefits the economy (and the budget) in the long term, or the kind that will help boost employment. The takeover will benefit management and shareholders in Asciano who will do their best to shelter the profits they will make from tax and then go out and invest the cash from the bid in other assets, boosting their cost and lifting management and other fees for the fund managers and no one else.

Fortunately, to offset all that we have negative gearing and foreign investment rules that, despite politicians and the media deliberately encouraging xenophobia, allow foreign investors to invest in new housing stock. The ABS also yesterday released dwelling approvals data for May. The bad news? Seasonally adjusted, approvals for new houses fell by 8.4%. The good news, however, is that approvals for non-house dwellings — apartments, etc — rose by more than 16%, and in the last year have risen 46%. Much of that is coming, unsurprisingly, in NSW and Victoria: NSW had its fifth-highest month ever, and Victoria its highest month ever, in terms of overall approvals, seasonally adjusted. There was a particularly big surge in the value of buildings in the category “flats, units or apartments in a four or more storey block”, which, at $2 billion nationally in one month, was its highest ever level.

That’s not just the slow trend away from the traditional quarter-acre block, but negative gearing at work — investors taking advantage of record-low interest rates to pile into the apartment market, along with foreign investors, who, under existing laws, are allowed to invest in new housing (and don’t face racist abuse from other buyers in doing so). Nor would that be affected, despite the Prime Minister’s asinine claims, by Labor’s thinking about negative gearing, which would confine it to new housing and thereby, if anything, channel more money into construction rather than chasing existing assets.

For the moment, be grateful for negative gearing investors and those much-maligned foreigners.

How they deal with a defiant media in Singapore’s ‘democracy’

“the Infrastructure Prime Minister” still gets used occasionally by the PM, albeit not nearly as much as last year.

Albeit when we Aussies use it about him, it’s in an ironic or laconic sense.

Abbott was in far north Queensland recently talking crap about our future prospects. Meanwhile Cairns has the highest or second highest youth unemployment in the country, no tower cranes and no museum. But we have given the French 100 millions dollars for a museum. Warren Entsch- whose side are you on?