Gina Rinehart is appearing on Australian Story, plus other media tidbits of the day.

Rinehart in a new light. In what’s been widely seen as a bid to retell her story in her own words following Channel Nine’s unauthorised telemovie on her life, Gina Rinehart has authorised the ABC’s Australian Story to air a two-part special on her life.

“Over two episodes Gina Rinehart reflects on the pioneering exploits of her early ancestors and talks candidly about her father’s triumphs and struggles, her pride in the imminent completion of the Roy Hill mine, and the business and family troubles she has encountered along the way.

The inclusion of Ferguson in the line-up will no doubt offer some bite to the programs — Rinehart sued the Gold Walkley-winning journalist in a bid to have her divulge her sources, after Ferguson published an unauthorised biography of Rinehart’s life in 2012. The other Fairfax journalist interviewed, the Financial Review’s Jennifer Hewett, was in the same boarding-school class as Rinehart in Perth, and has thus known the billionaire for years.

Rinehart observers will be closely watching to see how critical the program really is. As Crikey has previously noted (see our 2013 piece), Australian Story has a reputation for going softer on its subjects than is common in much ABC news and current affairs programming. This has benefits and negatives. On the plus side, audiences love it. The program rates well, and can counter the cynicism with which some subjects are habitually treated by the media, giving viewers instead a sense of understanding and meaning. On the other hand, harder-nosed viewers have accused the program of “descend[ing] into hagiography”, as Mike Carlton said following what he saw as a soft profile of nemesis Ray Hadley.

No doubt the fact that Australian Story isn’t Four Corners would have played into Rinehart’s decision to cooperate with the program. The first episode airs next Monday. — Myriam Robin

The perils of live TV. Like a dozy wombat waddling out of its burrow into the light, the ABC board has finally broken cover on the Q&A kerfuffle, only to deliver itself of one of the silliest media releases in ABC history. Of the now-infamous Zaky Mallah, the board now says:

“Given his criminal background and past public statements, the live broadcast meant that the ABC was not in a position to manage unpredictable or inappropriate actions or responses.”

But that is true of any live appearance on television, by anybody. When Bob Hawke appeared on Monday Conference — the precursor to Q&A — as head of the ACTU, he was often unpredictable. How can we be sure that the next time the Prime Minister appears on 7.30 he won’t rip off his clothes and dance a nude tango with Leigh Sales?

Strange, uncontrollable and possibly offensive things are always possible “live”, which is why talkback radio is on a seven-second delay (and why  Q&A should be recorded if it wishes to continue its risky tactic of staging surprise confrontations).

Meanwhile, the board’s appointment of Ray Martin to conduct an “audit” of Q&A seems ludicrous to those with reliable recall of his long career. This is the same Ray Martin who presented the savage A Current Affair attacks on the unemployed Paxton kids, and who sued the ABC for defamation.  — Former ABC executive producer David Salter

Choose your own adventure. The internet has made many of the ABC’s core functions redundant, and anyway, the public’s trust in the institution is rapidly declining. 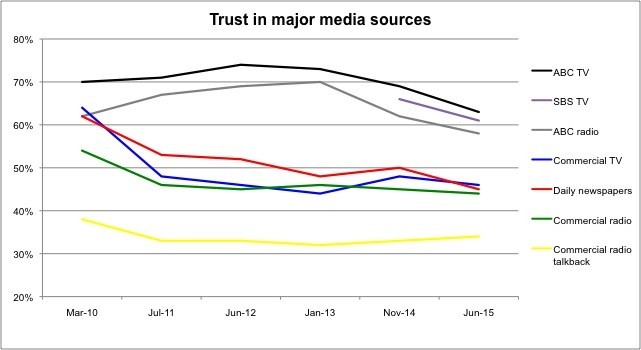 So says former ABC chairman Maurice Newman in an opinion piece in today’s Australian. As proof of his thesis, he cites the most recent Essential trust in media figures (see graph above):

“While the ABC still is most trusted overall, it is rapidly losing ground. In the three years since June 2012, 11 per cent fewer television and radio news and current affairs viewers and listeners had “a lot or some trust” in the public broadcaster.

Newman’s use of the figures (first published in Crikey last week) is interesting, because the same figures are regularly trotted out by ABC management to justify their institutions unique place in Australian society. In Mark Scott’s address last Thursday defending the ABC, for example, he said:

“Australia has an independent ABC and that independence is key to its credibility. It’s why trust in the ABC is streets ahead of commercial media. The Essential Poll conducted earlier this week demonstrates that far more Australians put their trust in ABC TV news and current affairs, than other media outlets.

“It’s why the ABC is one of the most trusted institutions in the country, along with the High Court and the Reserve Bank.”

Both Newman and Scott are correct. The level of trust in the ABC is declining (along with the trust in all major newspapers and most media sources including online news sites), though it remains one of the most trusted institutions in the country.–Myriam Robin

And speaking of Maurice … Well, if you want a pathetic end to a beat-up, Maurice Newman’s your man. The banker and conspiracy theorist waded into the remains of the Q&A debate in the Oz today, with a banker’s logic — forget the free-speech issue. Are we getting value for money?

His answer of course is nooooooo. Public broadcasting is an anachronism. Some of his evidence leaves little to be desired. dividing between the self-defeating and the lame-o. The self-defeating first: “A TV news culture increasingly given to the voluble and the prejudiced … the contrivance of hostile confrontation … makes no contribution to the citiznery,” quotes Newman, on the op-ed page of The Australian.

The lame-o? “A recent essential poll asked ‘how much trust do you have in what you read and hear in your media.’ While the ABC is still most trusted overall …” Really, Maurice? That’s the best you’ve got? In a paper cross-subsidised by the profits from the least-trusted source (The Daily Telegraph). Thus does the beat-up end, with a whimper from a banker. — Guy Rundle

“We are delighted to announce this appointment. Ben has been a part of the Seven Network for a number of years and has impressed us greatly with his management and leadership skills. I wish to acknowledge Neil’s tremendous contribution to our businesses across news and public affairs and television management. He hands over Seven Queensland in terrific shape as the market-leading television network across the fast-growing regional Queensland markets.”

Front page of the day. They sure don’t know how to build infrastructure in Britain, if 36 degrees destroys their motorways … 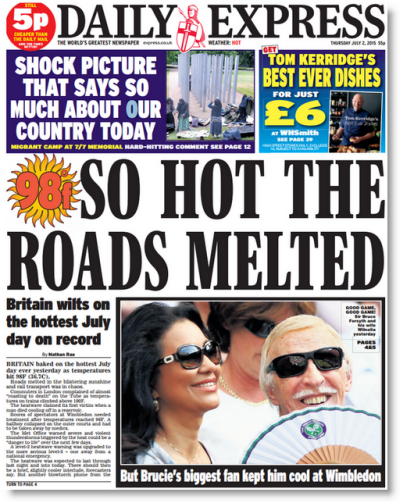 a commentator from earth

re “The perils of live TV” and “Given his criminal background and past public statements, the live broadcast meant that the ABC was not in a position to manage unpredictable or inappropriate actions or responses.”

Obviously someone at the ABC remembers the complete trainwreck that was the appearance by Chopper Read on Elle McFeast’s late night talk show. Sometime in the 1990s if my memory serves me well. The dearly departed Chop-Chop’s appearance meets all the criteria in the ABC board’s media release quoted above.

Given how hard the Liberals have been trying to destroy the ABC for nigh on a couple of decades now, it’s hardly surprising to see them making some headway.

Looks like Tone won’t be able to escape the crap climate change even by retreating to his country of birth!