What is going on at the Migration Review Tribunal? ... Don't call them Primary Health Networks ... Clinton v fax machines ...

Members of tribunal dropping? Today is the big launch day for the Australian Border Force, and even though the new force couldn’t keep its website up for more than a few hours, we hear that there are other changes in the Immigration Department that will have a negative effect on migrants and refugees:

“The Federal Government has started making huge cuts in the number of members of the Migration Review Tribunal & Refugee Review Tribunal. It is doing that by not renewing the Tribunal Members’ five year fixed term appointments as they come up for renewal. This is a horrifying lack of compassion when so many are in horrific situations while awaiting determination of their applications.”

In the 2013-2014 report from the principal member of the Migration Review Tribunal and Refugee Review Tribunal, there were 137 members of the tribunals. We asked the department how many members there currently are but didn’t hear back by deadline.

The email from the Department of Health tells CEOs that they should be referring to themselves as their area and “PHN”, and that they will be required to use consistent branding decided by the department. That the Department of Health — a vast bureaucratic colossus even after non-stop slashing and burning of staff numbers in recent years — waited so late to advise CEOs is quite astonishing: Primary Health Care actually sued over the name in 2010 — and only dropped that case in 2012, when the previous government decided to use the term “Medicare Locals”. Did no one in Health actually remember? Thank goodness these people aren’t actually in charge of anything important. Oh, wait…

Jeb! Bush Tax Returns and Clinton emails. It must be transparency day for US presidential candidates, with Jeb! Bush releasing 33 years’ worth of his tax returns, and Hillary Clinton releasing thousands of emails from her time as secretary of state. Bush’s tax returns don’t make for exciting reading, but they do show that his income shot up after his time as governor of Florida. Clinton’s emails were released a few hours ago, and while a proportion of emails concern the more serious elements of foreign affairs, the emails highlight a tumultuous relationship between Clinton and her fax machine: 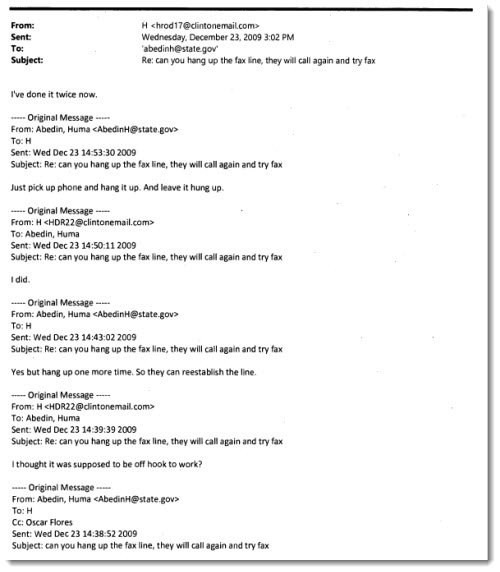 Flying Heap of Crap Watch, part 69787463. We already know that Crikey’s favourite boondoggle, the F-35, can’t fly (at least not without catching fire), won’t be able to shoot until 2019, can’t adhere to even its ludicrously extended delivery schedule, can’t meet performance goals without the goals being downgraded. But the world’s most expensive tarmac adornment just racked up another win: it can’t dogfight. An amazing report in the US military blog War Is Boring reveals that an F-35 pilot who went up against an ageing, fully-laden F-16 jet in January to test the F-35’s capacity in dogfights issued a scathing report about the poor performance of the jet and how it was easily out-maneuvered by the 1970s-vintage plane it is meant to replace. “Even with the limited F-16 target configuration, the F-35A remained at a distinct energy disadvantage for every engagement,” the pilot said. If it was just taxpayers’ money we were wasting on this piece of junk, it’d be bad enough, but what if our pilots ever find themselves in an actual conflict in this thing? Given the massive delays in delivery of the plane, by then, the politicians, Defence officials and military brass who are culpable in buying the F-35 will probably be long gone and beyond unaccountability. Let’s hope the Chinese really did steal the plans and are building it exactly as designed. Then we might be in for a fair fight.

Spreading the word. In celebrity news this week, Sydney’s paparazzi are likely to find themselves at the Hillsong Conference, where popster Justin Bieber is reportedly getting closer to god. If Biebs does turn up today, he’ll find himself in distiungished company. Stuart Robert, Assistant Minister for Defence, will be speaking at the Christian conference as part of the “Pillars of Influence Masterclass”, which are ” discussions on how to reach and influence the world through the pillars of society”. Robert is listed as one of the speakers on the government class, along with CEO of Mission Australia Catherine Yeomans. The program says ” hear from innovative individuals who are influencing their pillar with the message of Jesus”.

Speech and judgement. A tipster decided to email Environment Minister Greg Hunt, his local MP, about the furore over Zaky Mallah’s appearance on Q&A and received this “prompt” response yesterday afternoon:

“Many thanks for your email.

The issue is not about free speech — that’s a legal right to voice certain opinions.  This is about the national broadcaster providing a platform to someone who has admitted to supporting terrorists, been jailed for making death threats and has made very grave statements on social media in relation to female journalists.  It’s about an error of judgement and failure to recognise the consequences of allowing someone who does not respect Australia’s values, to appear on national television.

Will the ABC be asking every guest from now on if they “respect Australia’s values”? We doubt it.

Greece Bailout Fund. Some bright gen Y spark decided to do their bit to help out Greece, which defaulted on its loan repayment today, by starting a crowdfund to get them their 1.6 billion euros. It’s almost at half a million euros, with six days to go. We weren’t sure who would donate to such a project, and then we saw the perks, which include a Greek feta-and-olive salad, a bottle of ouzo, and a Greek holiday for two. It was so popular the site actually crashed overnight. 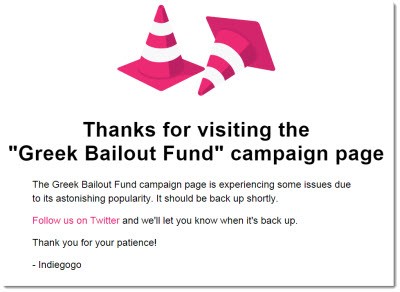 “F35 Lay-Buy” – we got laid with Howard buying them (to help the Bush/US weapons industry).

What are “Australian values”? Not very much going by Murdoch’s bidding.

Re F35. You could add that an independent Canadian study last year showed that the true cost of the plane to its purchasers would be double the quoted costs.
And no, the Chinese and Russians have no need to use the F35’s plans even though they probably have them. Both countries have already produced their own advanced fighters that are superior to the F35 on every dimension. Add their supersonic attack missiles, the S500 defence system, and a supersonic missile that will blow aircraft carriers to smithereens our defence “planners” had better hope their is no fight at all.

Klewso asks what are Australian values? Judging by those most supported by this government: 1) paying very little tax, while arranging to have political decisions made in your favor
2) renouncing Australian citizenship for financial advantage
3) putting profits ahead of the welfare of workers
4) assuming money can buy everything you want
5) trashing the environment and your children’s future.

I think I’d rather support the ABC

Sure it looks to be a terrible procurement program, but the end product might be a great platform ? (Think F-111)

The review was talking about the comparative dog fighting and energy performance. That’s like critiquing a new Ferrari on its ability to tow a caravan, instead of it’s intended function.

The F-35 is designed to deliver ordinance to a target without getting destroyed by air or surface threats. I would think that it’s probably very, very good at that.