Discussion of that Q&A episode continues.

Assistant Treasurer Josh Frydenberg is surely a little blinded from the camera flashes this week, as he jumps up 18 spots following comments on new regulations for superannuation, international terror attacks, housing prices, denying an early election and bearing the brunt of an alleged anti-Semitic rant on Twitter. Deputy Opposition Leader Tanya Plibersek joins him in the middle, up nine places as she lambasted the federal government for giving the opposition insufficient time to examine its (now passed) changes to citizenship, was a guest on this week’s Q&A, and voiced her support for Bill Shorten during The Killing Season.

After legislation was rushed through Parliament last week to close a loophole that could have seen offshore detention challenged by the High Court, Attorney-General George Brandis had a quieter week and dropped 11 places to the bottom, joining Victorian Premier Daniel Andrews and Agriculture Minister Barnaby Joyce. 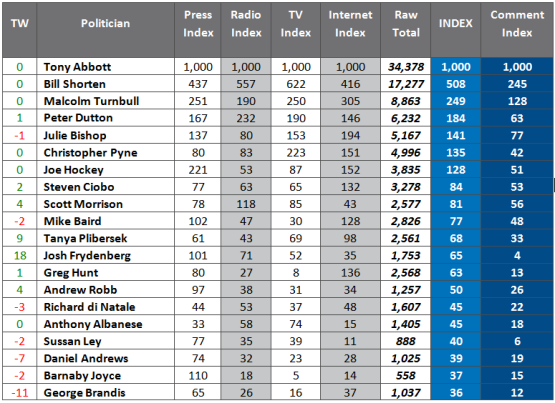 The PM gets closer to the 100K mark as discussion of his response to Q&A dominates much of social media.

Malcolm Turnbull and Steven Ciobo enter talkback ranks as multiple reviews into the ABC go ahead and free speech is examined from every corner.

Nick has officially joined the ranks of half-decent tennis players who can chuck a good tanty. To be fair, I’m not sure how following through on a mid-Wimbledon-match “strike” would solidify a win, but then again, I’m not a tennis player, am I? Wait a second (I am)…