Be afraid: how Hockey’s defamation win will affect you. 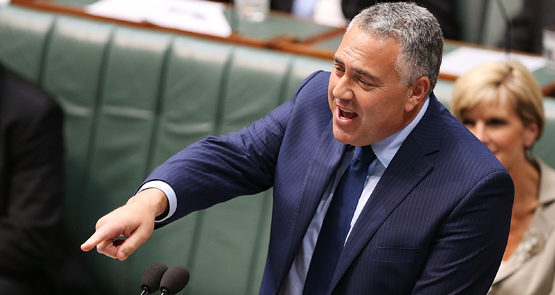 As we’ve argued here before at Crikey, by suing the media for reporting about his political (not personal) behaviour, Joe Hockey has trashed the role of a free press in a parliamentary democracy.

The true fundraising activities of our political parties — and yes, the influence that some donors no doubt seek to buy with political donations — have for too long been obscured from public scrutiny in this country.

But there are other alarming precedents set by yesterday’s judgement — especially for online outlets like Crikey, their audiences, and anyone who uses social media to disseminate news.

Justice Richard White found that the articles published by Fairfax in their “Treasurer for sale” investigation were not defamatory, but that a poster and some tweets were. In one instance, a tweet of the headline “Treasurer for sale” alongside a link to one of the Fairfax articles was found to defame Hockey.

The reason? Because readers of the tweet would not necessarily have clicked on the link and read the full context behind the headline.

Context has long been important in defamation law — and previously it has been assumed that any reader of a newspaper who reads a headline will also read the article attached to it, and therefore not make assumptions based on a provocative three-word statement.

After this case, and in the context of social media, that is no longer the case. As Bruce Guthrie tells Crikey today in the wake of this decision: editors, use clickbait at your peril.

We would go one step further to issue a warning to all ordinary users of social media: tweet news articles at your peril. We will not be surprised if this case creates a new climate of fear in online communication.

For their sake, as well as ours — and yours — we strongly encourage Fairfax to appeal.

People reading headlines and not the accompanying story should come as no surprise, surely?

21st century attention spans are being reduced to that of a gnat. We’ve willingly been trapped in the internet click-o-sphere.

To be honest, if the effect of this ruling is to curb or dampen the rampant click-bait, scaremongering, just-plain-ridiculous headlines then I’m fully in favour of it!

If they’re only reading the poster, then how do they even know what treasurer is being referred to? federal, state, or local bowls club? Do they all get a payout?

This is the guy who complained about the “Age of Entitlement”, right? At least he is helpful enough to give practical examples.

I think people have to get used to the fact that twitter is an independent platform to a news paper web site.
So putting a link to an article on twitter isn’t context at all.

If the tweet included the relevant lines in the article for context, it wouldn’t have been an issue.