There's nothing all that remarkable about Greece's current position, writes freelance journalist and economist Jason Murphy. 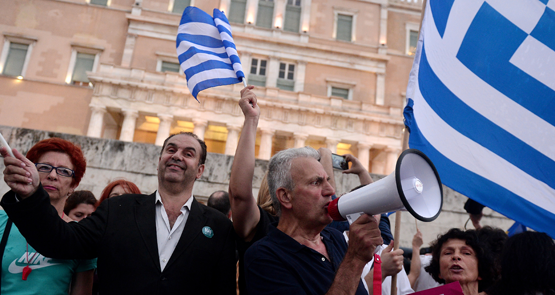 Ask anyone who goes bankrupt, and they’ll tell you it is — at least in part — a relief.

For this reason it’s no surprise the Greeks failed to pay their 1.5 billion euro (A$2.2 billion) loan instalment to the International Monetary Fund, just a few hours ago, at midnight on July 1. Greece is likely now to default on the entirety of its obligations.

Greece owes its 243 billion euro (A$351 billion) debt to the IMF, to Germany, to France and to its own banks. Its default will be the biggest in history.

The most recent developed country to default was Argentina in 2001. It owed US$132 billion. Greece is much bigger, and closer to the global economic epicentre.

Excitable people are calling Greece “a nightmare” and even a “black swan”.

But a black swan event is one you couldn’t see coming. A Greek debt default is a bird of the purest ivory imaginable.

Greece first defaulted on its debt around 400BC and has been in default for much of its modern history. This chart, from Harvard economics professor and debt default expert Carmen Reinhart, gives a sense of the recurring turmoil in Greek finances. 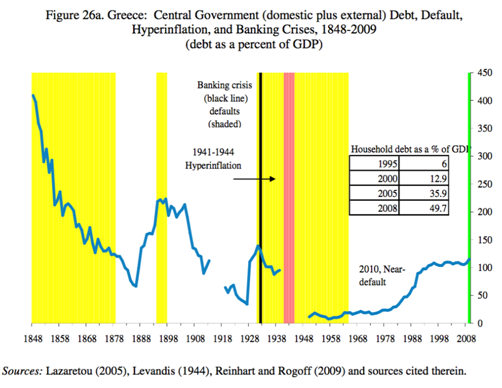 The blue line is debt as a percentage of GDP; yellow shading is years spent in default or restructuring; pink is hyperinflation; green is near-default.

Here’s what will happen: Greece will default on its debt, write off some, restructure some, pay back cents in the dollar to some creditors, get a new currency and — hallelujah — a new exchange rate. After a sharp painful period it will probably make its people better off.

Meanwhile, global financial markets have had time to get ready.

Unlike the situation with US banks and the GFC, we can’t say we weren’t warned about Greece. Headlines on Greek default (oh, a tragedy reference? how novel) have been coming thick and fast for years.

Grexit — the cutesy term for Greece leaving the euro — was coined three and a half years ago (by Citigroup chief economist Willem Buiter, who now reportedly thinks Greece will stay in the euro).

There has been sufficient time to prepare. The world economy is likely to absorb this default like Facebook absorbs communication start-ups. Which is to say, it might cost a lot, but you’ll never notice the difference.

This Greek default is probably going to be the biggest in history. But of course the global economy is also the biggest it has been throughout history too.

In the economic narrative of the world, the loan that goes unpaid is a recurring nemesis that never quite triumphs. These graphs from the Bank of Canada database of Sovereign Defaults shows the world has thrived through times where debt default was — in real terms — far higher.

The debt load of Greece will not be enough to sink the ship in which we all travel. That’s why RBA governor Glenn Stevens is sanguine.

The other concern about Greece is the contagion effect in terms of the integrity of the eurozone. Could the end of the euro really happen?

A schism is unprecedented for the euro. But not for the globe.

Ireland quit the UK’s currency in 1979. Tonga abandoned the Aussie dollar in 1991. In total, 69 states and territories have moved to their own currency since the end of the World War II.

If Greece’s euro exit proceeds smoothly, it may start to seem like there’s no downside to dumping the euro. Portugal and its ilk may ponder doing likewise. That could ramp up the chances of them leaving the eurozone. In this way, a smooth Greek exit might heighten risk perception. Therefore, paradoxically, if Greece’s exit proceeds disastrously, the integrity of the eurozone is more assured.

These two opposing forces likely mean a certain equilibrium level of panic is required about the economic integrity of Europe during coming years, in order to maintain its integrity.

Such stress and bluster is a necessary part of the global financial system. If it were more widely recognised how common and straightforward most debt defaults and currency splits really are, there may be many more of them.

Is it just me, or were enormous and unpayable insurance contracts written against the Greek default which, if activated, would lead to a lot of secondary financial damage?

There will be substantial knock-on effects, apart from a lot of counter-party failures.

For example, much of the asset base of Greece will need to be revalued as the economy restructures. This will produce all sorts of winners and losers.

I’m no economist, but it would appear that there are implications from the Greek experience as part of the EEC for all countries inside some economic community. I seem to remember John Raulston Saul having something to say on this. By joining such alliances counties make themselves vulnerable. Greece is at last realising that it’s best course of action is to cut its ties, wear the debt and get on with re-structuring its economy. Good luck Greece; I am rather fond of your people and your islands.

It’s a bit ironic to use data from Reinhart and Rogoff, given that their very flawed paper (subsequently dismantled by Krugman and others) was extensively used by the international financial powers that be as evidence of the need to go in extra hard on government debt, making the GFC rather worse than it otherwise might have been.